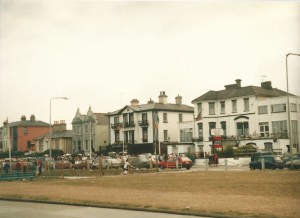 Bray seen from the beach…

The town of Bray (Bri Chulainn ) is located a little south of Dublin and just north of the Wicklow mountains on at a beautiful, sheltered bay at the Irish Sea. This bay runs from the Dalkey peninsula in the North to Bray Head in the south. Bray is one of the largest resorts in Ireland, mostly loved by and visited by Dubliners.

Inland from Bray start the Wicklow mountains, with large scrub covered slopes rising behind the town.

Bray (Irish: Bré, meaning “hill”, formerly Brí Chualann) is a town in north County Wicklow, Ireland. It is a busy urban centre and seaside resort, with a population of 31,872 making it the ninth largest urban area in Ireland at the 2011 census. It is situated about 20 km (12 mi) south of Dublin on the east coast. The town straddles the Dublin-Wicklow border, with a portion of the northern suburbs situated in County Dublin.

Bray’s scenic location and proximity to Dublin make it a popular destination for tourists and day-trippers from the capital. Bray is home to Ireland’s only film studios, Ardmore Studios, hosting Irish and international productions for film, television and advertising. Some light industry is located in the town, with business and retail parks concentrated largely on its southern periphery. Bray town centre has a range of shops serving the consumer needs of the surrounding area. Commuter links between Bray and Dublin are provided by rail, Dublin Bus and the M11 and M50 motorways.

The name of the town means hill or rising ground, possibly referring to the gradual incline of the town from the Dargle Bridge to Vevay Hill.

In medieval times, Bray was on the southern border of the the Pale, the coastal district governed directly by the English crown from Dublin Castle. Inland, the countryside was under the control of Gaelic Chieftains, such as the O’Toole and O’Byrne clans. Bray features on the 1598 map “A Modern Depiction of Ireland, One of the British Isles” by Abraham Ortelius as “Brey”. (It is worth noting the “O Byrne” name appearing prominently on the map). The Earl of Meath purchased the Kilruddery estate in Bray in 1627 with the establishment of the Earl title, the heir apparent is the present holder’s only son, Anthony Jacques Brabazon, Lord Ardee (born 1977). In August or September 1649 Oliver Cromwell is believed to have stayed in Bray on his way to Wexford from Dublin. During the 17th and 18th centuries, Bray remained a typical small manorial village, but during the latter part of the 18th century, the Dublin middle classes began to move to Bray which, while still being relatively close to the city, offered splendid mountain scenery and sea bathing in its immediate vicinity.

The Dublin and Kingstown Railway, the first in Ireland, opened in 1834 and was extended as far as Bray in 1854. With the railway, the town grew to become the largest Irish seaside resort. Five years after the building of the railway, Turkish baths were also built in Bray in an extravagant Moorish style at a cost of £10,000; these met an end after a turbulent century of business when the demolition squad arrived in 1980. The outbreak of World War II put the industry ‘on hold’ for its duration. However, during the 1950s tourists from Wales, England, Scotland, and Northern Ireland returned to Bray in great numbers to escape the austerity of post-war rationing. The town’s career as a resort declined from the 1960s onwards when foreign travel became an option for large numbers of people.

Thousands of people flocked to the seafront to see Olympic boxing champion Katie Taylor, the town’s most famous Sportsperson, return home from London in August 2012.

The River Dargle which enters the sea at the north end of Bray rises from a source near Kippure, in the Wicklow Mountains. Bray Head is situated at the southern end of the famous Victorian promenade with paths leading to the summit and along the sea cliffs. The rocks of Bray Head are a mixture of greywackes and quartzite. The large concrete cross at the summit provides a notable llandmark on the east coast and is a major attraction for locals and visitors.

The town is situated on the coast; Shankill, County Dublin lies to the north, and Greystones, County Wicklow to the south. The picturesque village of Enniskerry lies to the west of the town, at the foot of the Wicklow Mountains.

Bray is a long-established holiday resort with numerous hotels and guesthouses, shops, restaurants and evening entertainment. The town also plays host to a number of high-profile festival events. 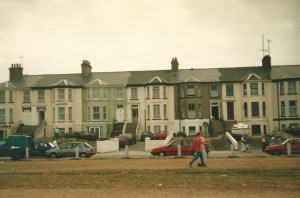 Past glory of stately houses on the coast…

Available in the town’s area and surrounding areas are two 18-hole golf courses, one tennis club, fishing, a sailing club and horse riding. Other features of Bray are the amusement arcades and the National Sealife Centre. Bray is known as the Gateway to Wicklow and is the longest established seaside town in the country. It has a beach of sand and shingle which is over 1.6 km (0.99 mi) long, fronted by a spacious esplanade. Bray Head, which rises steeply (241 m (791 ft) from the coast, dominates the scene, affording panoramic views of mountains and sea. The concrete cross at the top of the head was erected in 1950 for the holy year.

Bray is a popular base for walkers, ramblers and strollers. It is notable for its mile-long promenade which stretches from the harbour, with its colony of Mute Swans, to the base of Bray Head at the southern end – from where a well worn track leads to the summit. Also very popular with walkers is the 7 km (4.3 mi) Cliff Walk along Bray Head out to Greystones.

In January 2010, Bray was named the “cleanest town in Ireland” in the 2009 Irish Business Against Litter (IBAL) survey of 60 towns and cities.

The annual Bray Summerfest is an established tourist event, taking place over six weeks in July and August. The Summerfest features over 100 free entertainment events, including live music, markets, sporting entertainment, carnivals, and family fun. Performers who have headlined include Mundy, Brian Kennedy, The Undertones, The Hothouse Flowers, and Mary Black. In 2006, over 60,000 visitors attended the main festival weekend in mid-July.

Bray hosts an annual jazz festival on the May bank holiday weekend each year. Described by The Irish Times as “the connoisseur’s jazz festival”, Bray Jazz Festival has established itself as one of the main events taking place each year on the Irish jazz calendar. Established in 2000, the festival includes performances by jazz and world music artists from Ireland and abroad, and was described by All About Jazz as “one of the very best small jazz festivals in Europe”. In 2011 performers included BBC jazz singer of the year Christine Tobin, three times Grammy Award nominated Brazilian player Hamilton de Holanda, and American jazz guitarist Kurt Rosenwinkel.

It also hosts a yearly silent film festival, The Killruddery Film Festival in Killruddery Gardens, this runs from 13 to 15 April 2012. It shows such films as La Roue and Camille.

Bray is home to many pubs and restaurants, including the first Porterhouse bar, who specialise in brewing their own ales, stouts and beers. In 2010, the Lonely Planet Guide ranked the Harbour Bar in Bray the Best Bar in the World and the Best Off the Beaten Track Bar in the world. The O’Toole family owned the bar for three generations, but was bought by the Duggan family in 2013.

Bray is home to Ireland’s only film studios, Ardmore Studios, where films such as Excalibur, Braveheart, and Breakfast on Pluto have been shot.

The Bray Head Inn, the hotel of choice for the Victorians circa 1860, has been used for a variety of movies over the last 25 years.

Custer’s Last Stand-up was filmed in Bray and the town was also used to film Neil Jordan’s film Byzantium, part of which was shot in the Bray Head Inn. 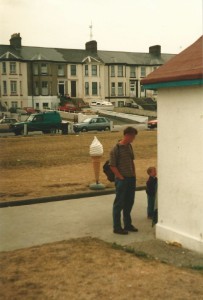 Ice cream shop at the beach…

Bray’s most popular spot is the Esplanada, a spacious open promenade stretching about 2 kilometres along a sandy and pebble stone beach. On that promenade is also an ancient bandstand.

Bray made ​​an impression of past glory on The Wandelgek. It was clear to see that years ago, this town must have been a modern resort, but it had been neglected for some years now.

After a stroll along the beach and the esplanada, The Wandelgek arrived at an amusement arcade. Besides computer games, with autocross, motocross, flight simulation, etc., there were also very nice do-it-yourself-games to see. E.g.: you could participate with 12 opponents in a camel race, where you throw balls into holes that have a certain value, to enable your camel to move.

There was also a game with a wooden shelf full of holes and mole heads popping up which had to be beaten back with a sledgehammer into the shelf. One, so it seemed, very frustrated Irish lady was very concentrated and fiercely trying to get rid of her aggression. With her tongue peeking from her lips, she kept whacking moles.

There was also a game with dustbins from which clowns emerged . 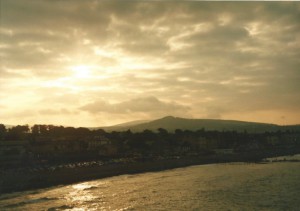 The Wicklow mountains behind Bray…

In the evening it was nice and quiet on a terrace at the Irish Sea, and then it was time to return to the campsite at Shankil near Dublin.