If you’re travelling across Tibet and leave cities like Lhasa and Shigatse behind you, you will see the authentic country life of the Tibetans.

I imagine that the country life in the Netherlands in the 20s and 30s of the previous century and maybe even longer looked a lot like the country life of Tibet in 1999. In rural Tibet you’ll hardly see any modern machinery, except simple engines powering wooden implements. Furthermore, all work is handicraft, performed by men. Manpower is the engine of the Tibetan farming, but also of construction projects in rural areas. 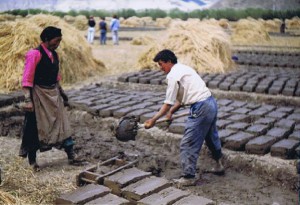 Somewhere on the long road between Shigatse and Gyantse, The Wandelgek saw a group of Tibetan villagers who were making bricks for the construction of houses. For this they had first stripped a piece of land of grass which now lay drying on hay stacks. While at work the Tibetans were singing loudly and at the rythm of the music men shoveled wet clay in a rectangular wooden shape. 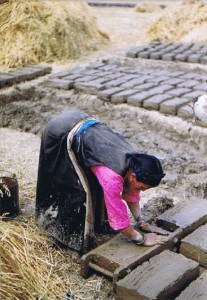 2. Next, the women got rid of the superfluous clay using their hands and with wet hands they smoothed the top layer of clay. 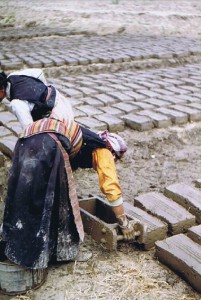 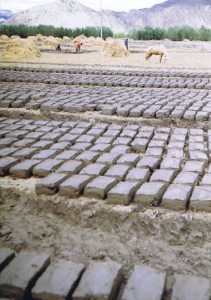 4. This process was repeated throughout the day which led to this result. The bricks were left to dry and harden in the sun. 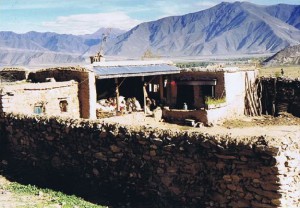 5. The houses built with these bricks are simple and have flat roofs.

At about 60 kilometers from Lhasa is the monastery of Ganden. Near a small village close to the monastery, the village population was harvesting. 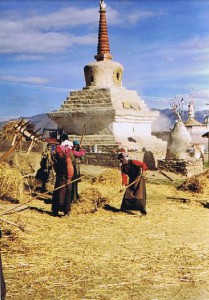 6. The women were mowing the dry wheat, raking it into heaps with simple tools. 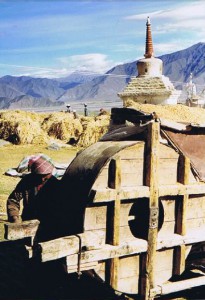 7. Then the wheat was put through a funnel and through a wooden hand-powered device in which the grains were separated from the stalks.

8. The empty stalks were then raked together and thrown on haystacks 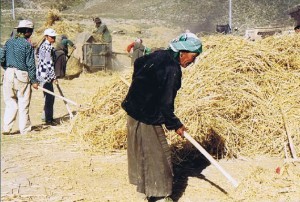 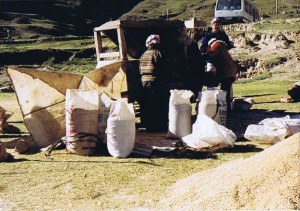 9. and the grains were collected in large bags. 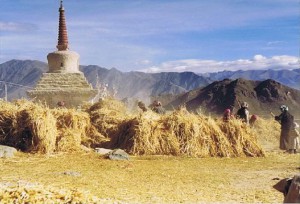 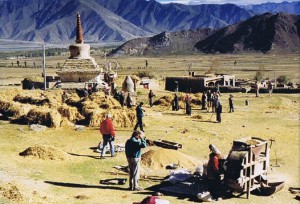 10. In the villages you’ll see lots of life stock like chickens or pigs and donkeys and even the inevitable yaks. 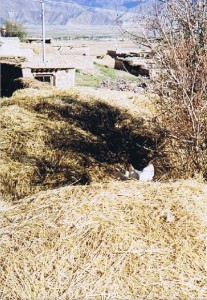 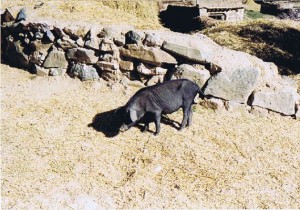 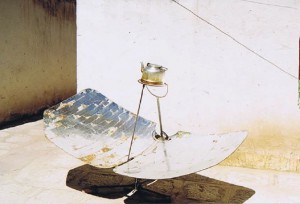 11. At the end of a long working day, there is time for a cup of nutritious yak butter tea set on a sunbeam driven water cooker consisting of a parabolic mirror, which leads the sunlight to a focal point and a platform at the focal point on which a water kettle is positioned.

As a traveler you are often invited to drink a cup of tea. This tea tastes like a blend of tea and salty broth and The Wandelgek did not like it, but if you empty your cup ASAP the cup is filled again to the brim.

TIP: It is important to leave your cup half full after which it is no longer replenished.