After a good night’s sleep and breakfast The Wandelgek took a bus to the Jasna (1200 m. above sea level), which lay at the foot of the 2,000 meter high Chopok.

Jasná is a small village situated in central Slovakia, in the Low Tatras mountains. It is a part of the municipality Demänovská Dolina. 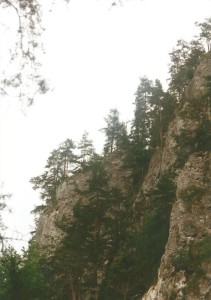 Chopok (2,024 m) is the third highest peak of the Low Tatra range (just after the neighboring Ďumbier and Štiavnica mountains) in central Slovakia. The peak offers a panoramatic view of High Tatra, Liptov and the valley of Hron. There is a chalet (called Kamenná chata) located near the summit. 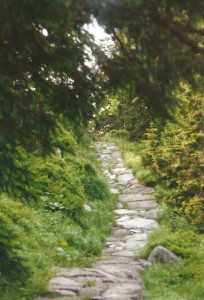 It was that day nice sunny weather (finally) and the wandelgek speeded upwards on the slopes of Mount Chopok towards its peak. Half way he met some hikers from Berlin with whom he chatted about the hike and the weather for the next couple of days (“there was change in the air”, they said). The walking paths to the peak were paved with large flat stones. 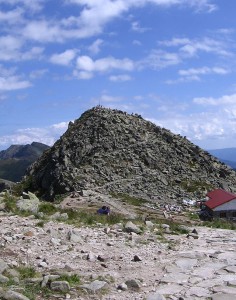 Above the tree line, The Wandelgek saw the peak which was still free from clouds, but the Berliners were right. The sky was changing. Gray mist and dark clouds began to emerge from behind the summit. The Wandelgek decided to turn around while still possible and choose for safety first. 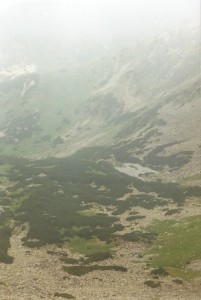 On the route down he stopped for a great panoramic view overlooking a beautiful valley formed by glacial moraines and a beautiful mountain lake. 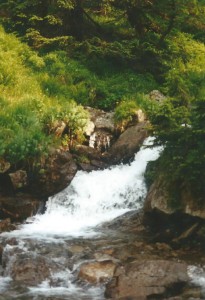 Mountain stream on the Chopok…

A part of the descent went over a steep road (actually a shortcut taken that went directly downhill to stay ahead of bad weather). This path was actually a dry mountain stream. There were large round stones everywhere and it was therefore the precipice to descend gently, especially after a heavy rain and thunderstorm erupted. Eventually he arrived at a tar road and the by now soggy Wandelgek found a bus shelter. The bus to Jasna, however had just leaving.

After the heavy downpour, that lasted for at least three quarters of an hour broke, the sun reappeared quickly.

Therefore, the Wandelgek began a walk across the road to Jasna. The berms were filled with flowering plants because the many rains of the previous period had provided them with a good summer. The Wandelgek however would have preferred it to be a little less wet.

From Jasna he traveled back to Liptovsky Mikulas and the campsite where a few well-deserved pivos were drunk.