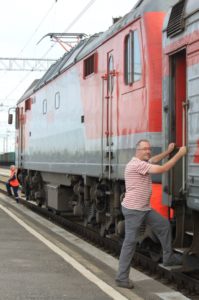 I’m embarking on the greatest and longest railway track in the world, the TransSib for an epic journey that will take me almost all accross the complete Eur-Asian landmass. I fly from Amsterdam to Moscow and then after visiting Moscow for a few days, I board the train for an almost 8.000 kilometre journey from Moscow to Beijing.

The Trans-Siberian Railway is a network of railways connecting Moscow with the Russian Far East. With a length of 9,289 kilometres (5,772 miles), from Moscow to Vladivostok, it is the longest railway line in the world. There are connecting branch lines into Mongolia, China and North Korea. It has connected Moscow with Vladivostok since 1916, and is still being expanded.

It was built between 1891 and 1916 under the supervision of Russian government ministers personally appointed by Tsar Alexander III and his son, the Tsarevich Nicholas (later Tsar Nicholas II). Even before it had been completed, it attracted travellers who wrote of their adventures.

Route description of my journey

The railway is often associated with the main transcontinental Russian line that connects hundreds of large and small cities of the European and Asian parts of Russia. At a Moscow–Vladivostok track length of 9,289 kilometres (5,772 miles), it spans a record eight time zones. Taking eight days to complete the journey, it is the third-longest single continuous service in the world, after the Moscow–Pyongyang 10,267 kilometres (6,380 mi) and the Kiev–Vladivostok 11,085 kilometres (6,888 mi) services, both of which also follow the Trans-Siberian for much of their routes.

My journey will immediately deviate from the the official TransSib route. 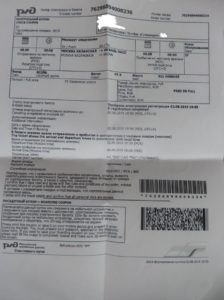 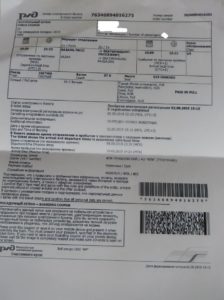 I’m gonna use the more southern Ural Line which connects Moscow with Kazan and Kazan with Yekaterinburg.

The main route of the Trans-Siberian Railway begins in Moscow at Yaroslavsky Vokzal, runs through Yaroslavl, Chelyabinsk, Omsk, Novosibirsk, Irkutsk, Krasnoyarsk, Ulan-Ude, Chita, and Khabarovsk to Vladivostok via southern Siberia. 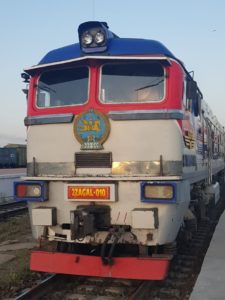 A second primary route is the Trans-Manchurian, which coincides with the Trans-Siberian east of Chita as far as Tarskaya (a stop 12 km (7 mi) east of Karymskoye, in Chita Oblast), about 1,000 km (621 mi) east of Lake Baikal. From Tarskaya the Trans-Manchurian heads southeast, via Harbin and Mudanjiang in China’s Northeastern Provinces (from where a connection to Beijing is used by one of the Moscow–Beijing trains), joining with the main route in Ussuriysk just north of Vladivostok. This is the shortest and the oldest railway route to Vladivostok. While there are currently no traverse passenger services (enter China from one side and then exit China and return to Russia on the other side) on this branch, it is still used by several international passenger services between Russia and China.The third primary route is the Trans-Mongolian Railway, which coincides with the Trans-Siberian as far as Ulan-Ude on Lake Baikal’s eastern shore. From Ulan-Ude the Trans-Mongolian heads south to Ulaan-Baatar before making its way southeast to Beijing.In 1991, a fourth route running further to the north was finally completed, after more than five decades of sporadic work. Known as the Baikal Amur Mainline (BAM), this recent extension departs from the Trans-Siberian line at Taishet several hundred miles west of Lake Baikal and passes the lake at its northernmost extremity. It crosses the Amur River at Komsomolsk-na-Amure (north of Khabarovsk), and reaches the Tatar Strait at Sovetskaya Gavan. On 13 October 2011, a train from Khasan made its inaugural run to Rajin, North Korea.

My journey however, will immediately deviate from the TransSib,I’m gonna use the more southern Ural Line which connects Moscow with Kazan and Kazan with Yekaterinburg.

From Yekaterinburg I’ll take the Trans Siberia Express as described above and further beyond in more detail and from Ulan Ude I’ll be following the Trans Mongolian primary route through Ulaan-Baataar to Beijing.Here’s a detailed list with railway stations, distances (in kilometres and in hours). Also indicated are some points of interest and river crossings. The complete Trans-Siberian route can be done in 7 to 9 days and the route I’m doing (Trans-Mongolian route) in 6 days. But I decided to stop a lot along the route and get out at several cities and areas of great natural beauty, to do some walks/hikes/treks and even a real roadtrip. More of that in upcoming blogs.

Confused? Here’s a recap of the above in a map (I travelled the Blue Ural Line from Moscow via Kazan to Yekaterinburg, the Red Trans-Siberian Line from Yekaterinburg to Ulan Ude and the pink Trans-Mongolian Line from Ulan Ude to Beijing (excluding a bit of that line in northern Mongolia (between Darkhan and Ulaan Baatar) where instead I did a road trip through northern and central Mongolia)): 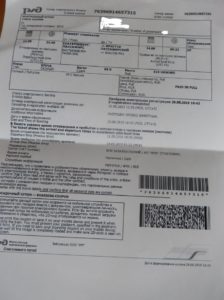 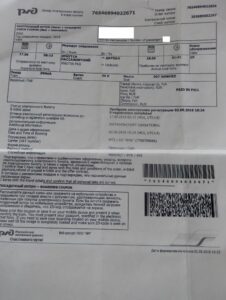 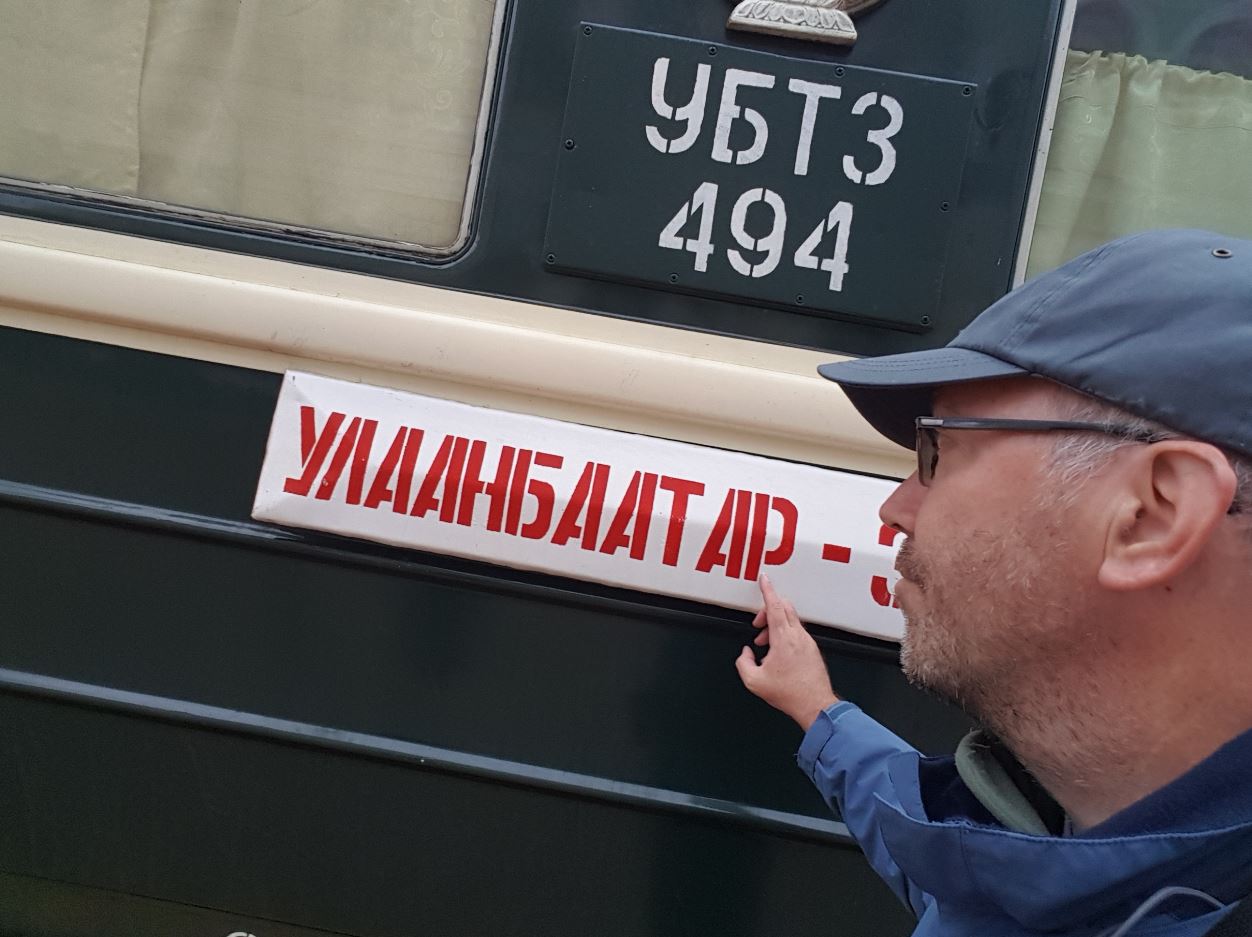 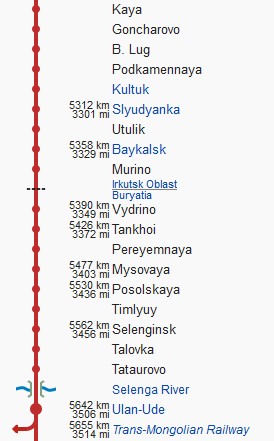 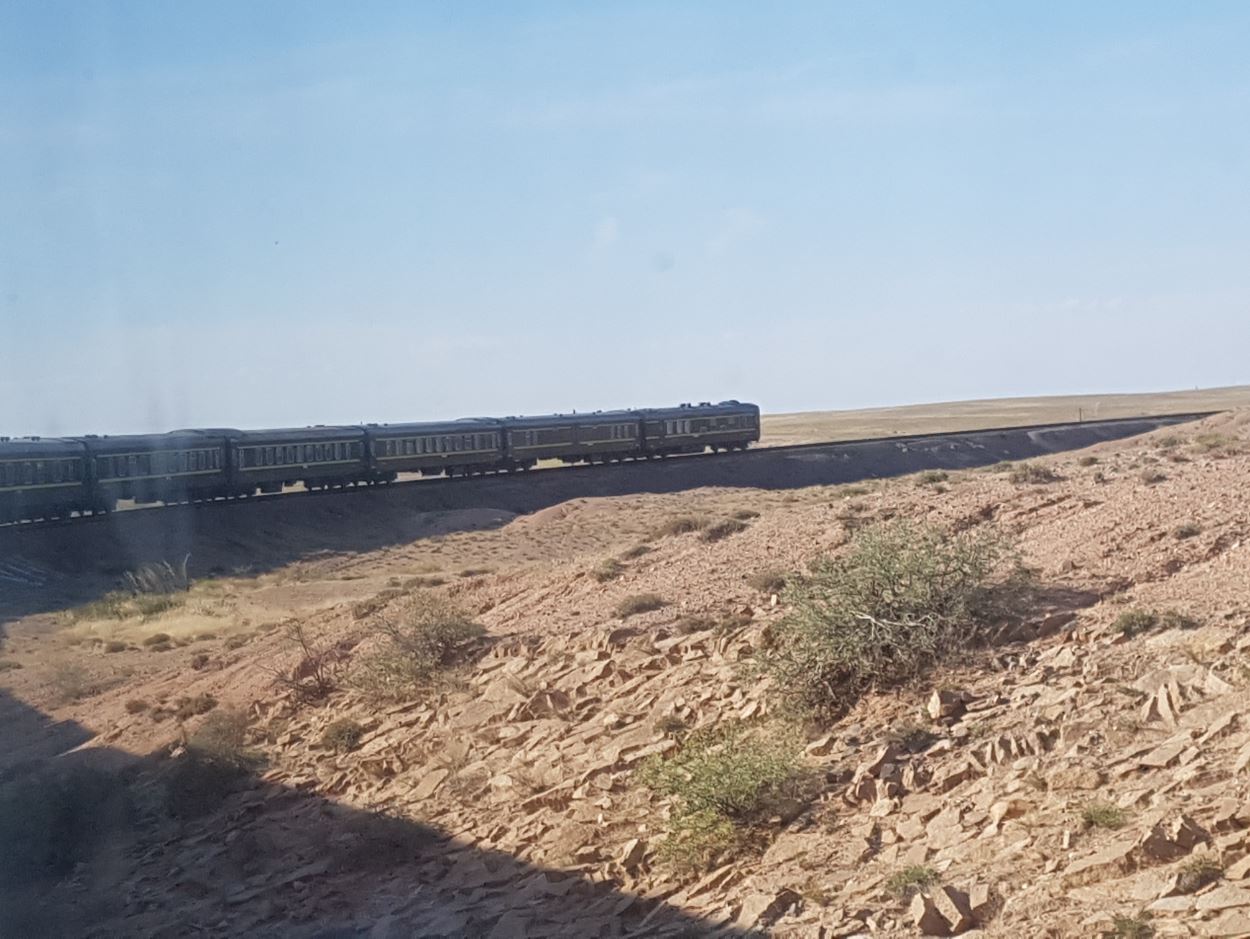 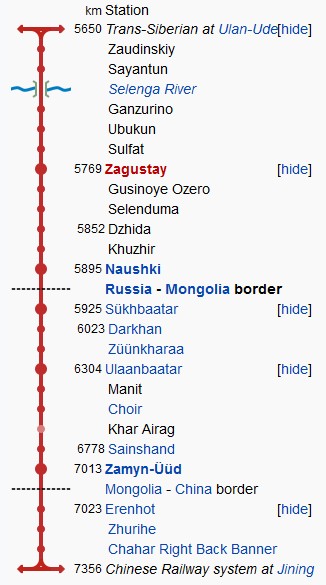 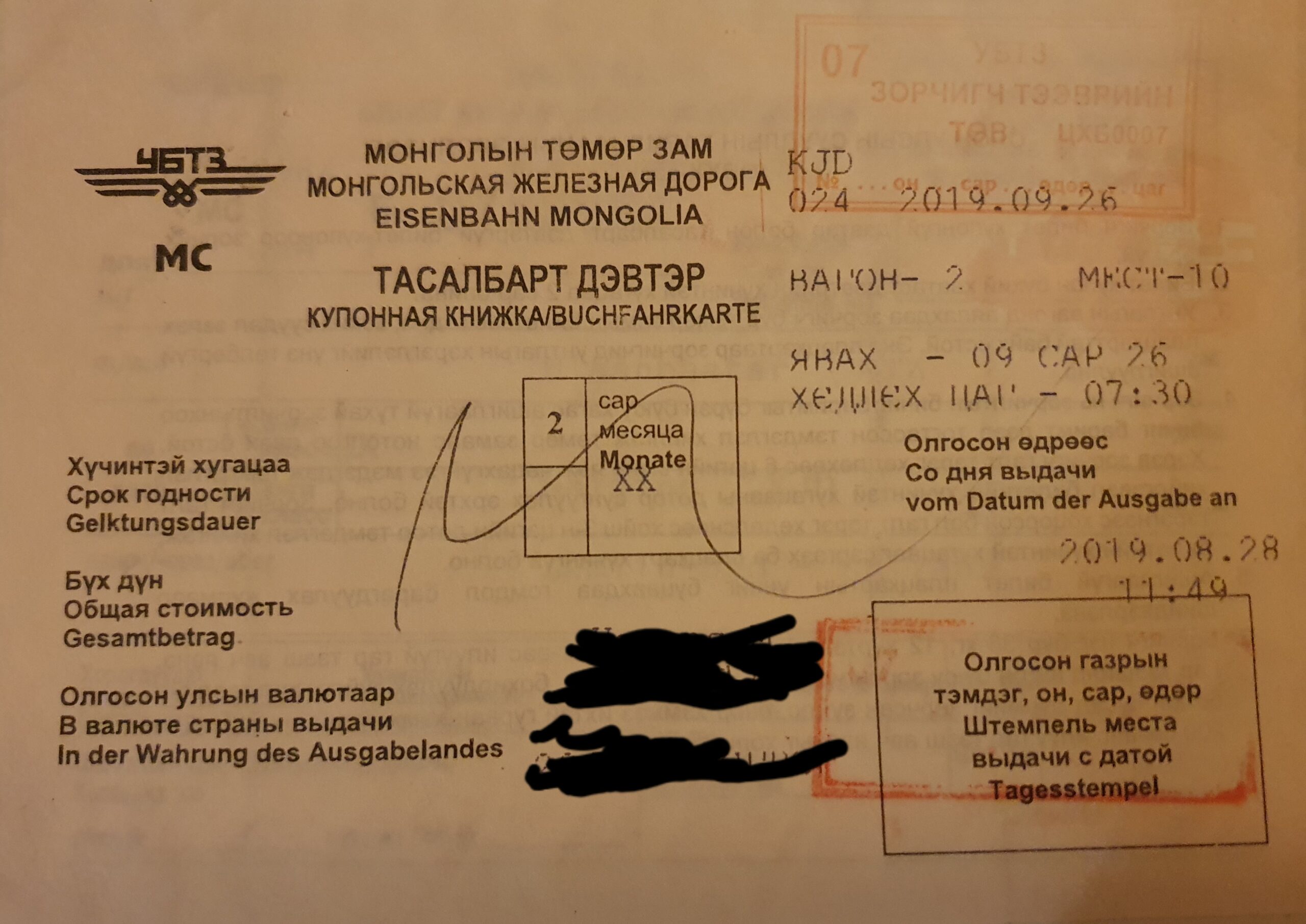 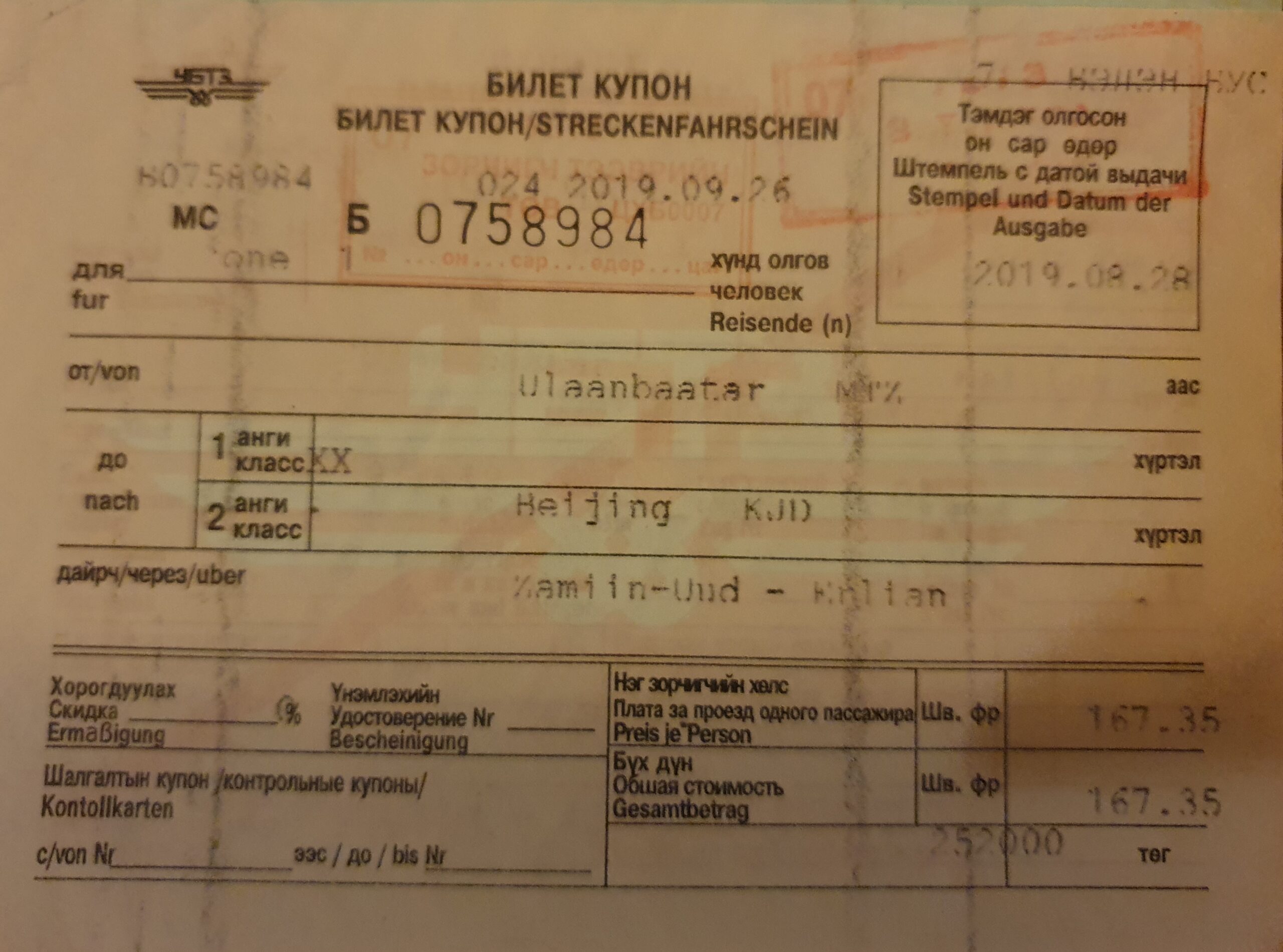 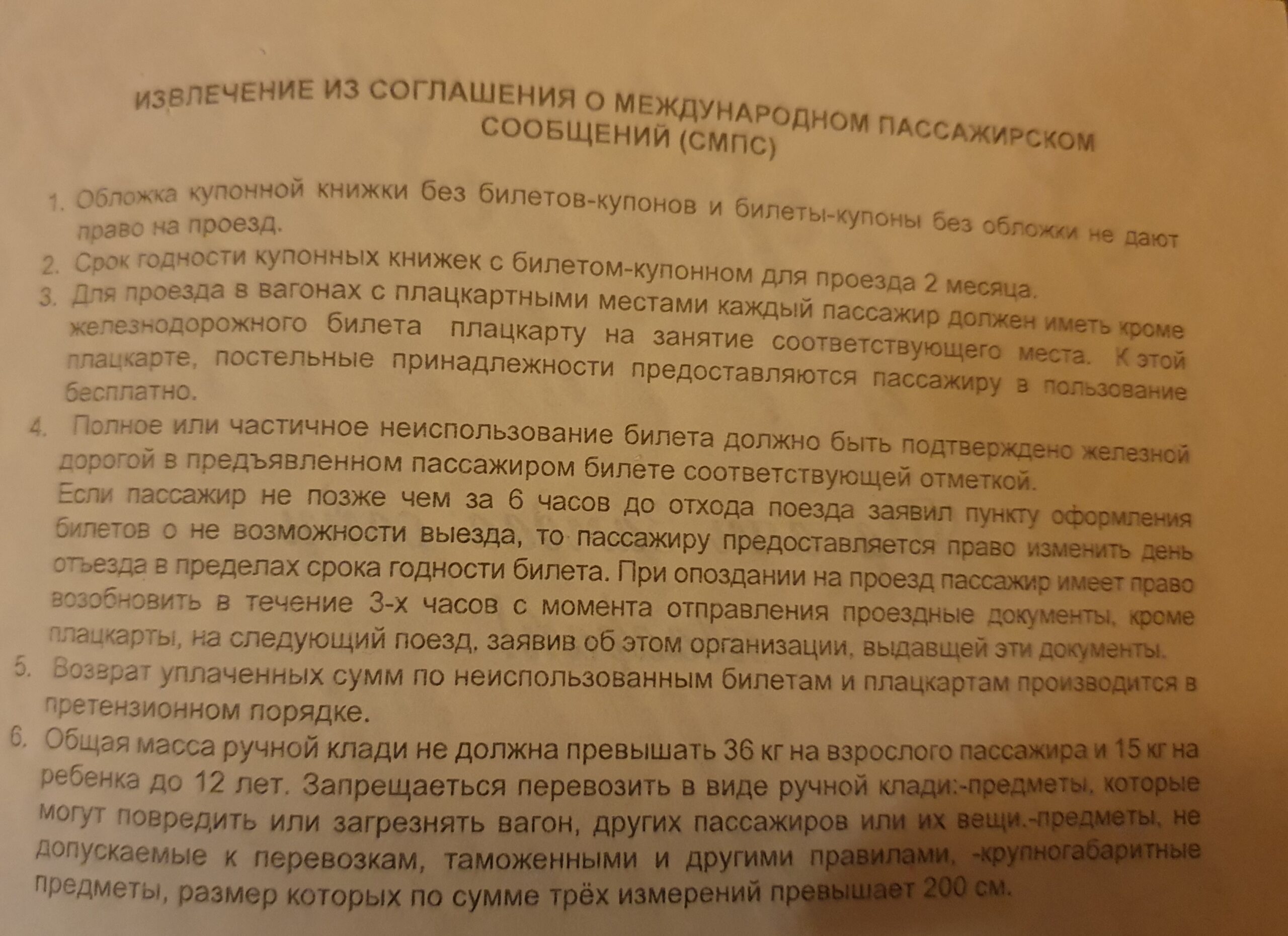 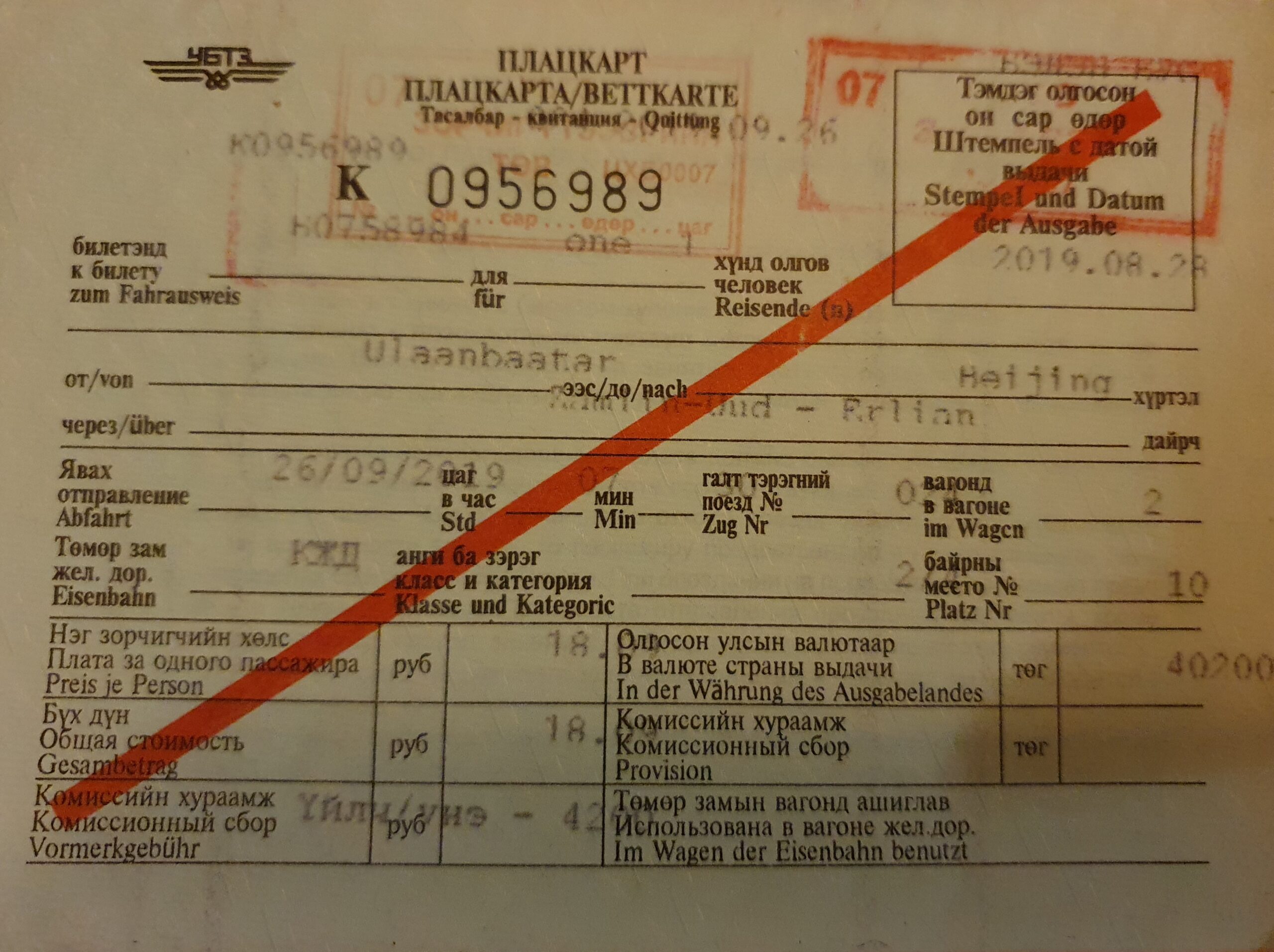 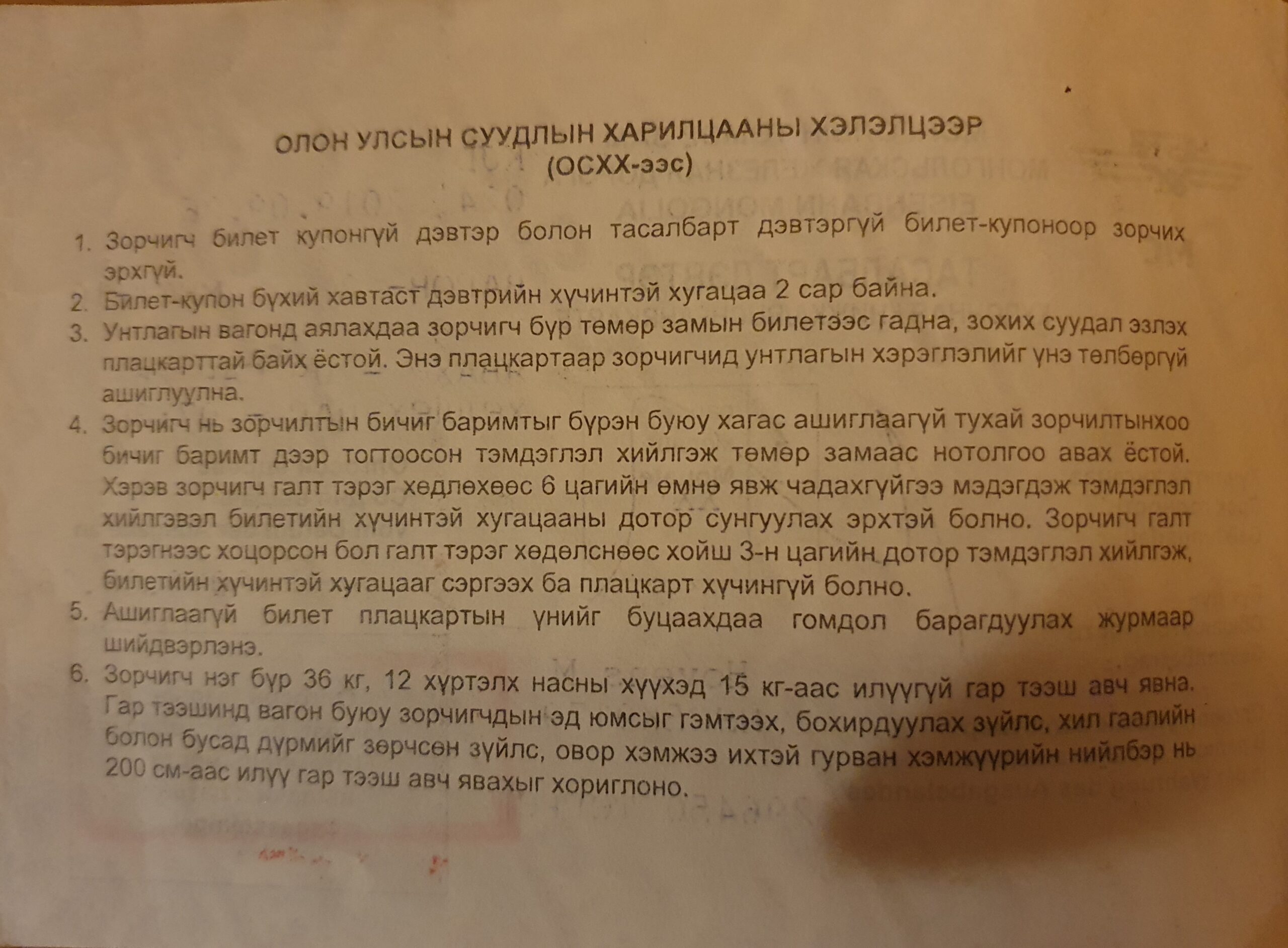 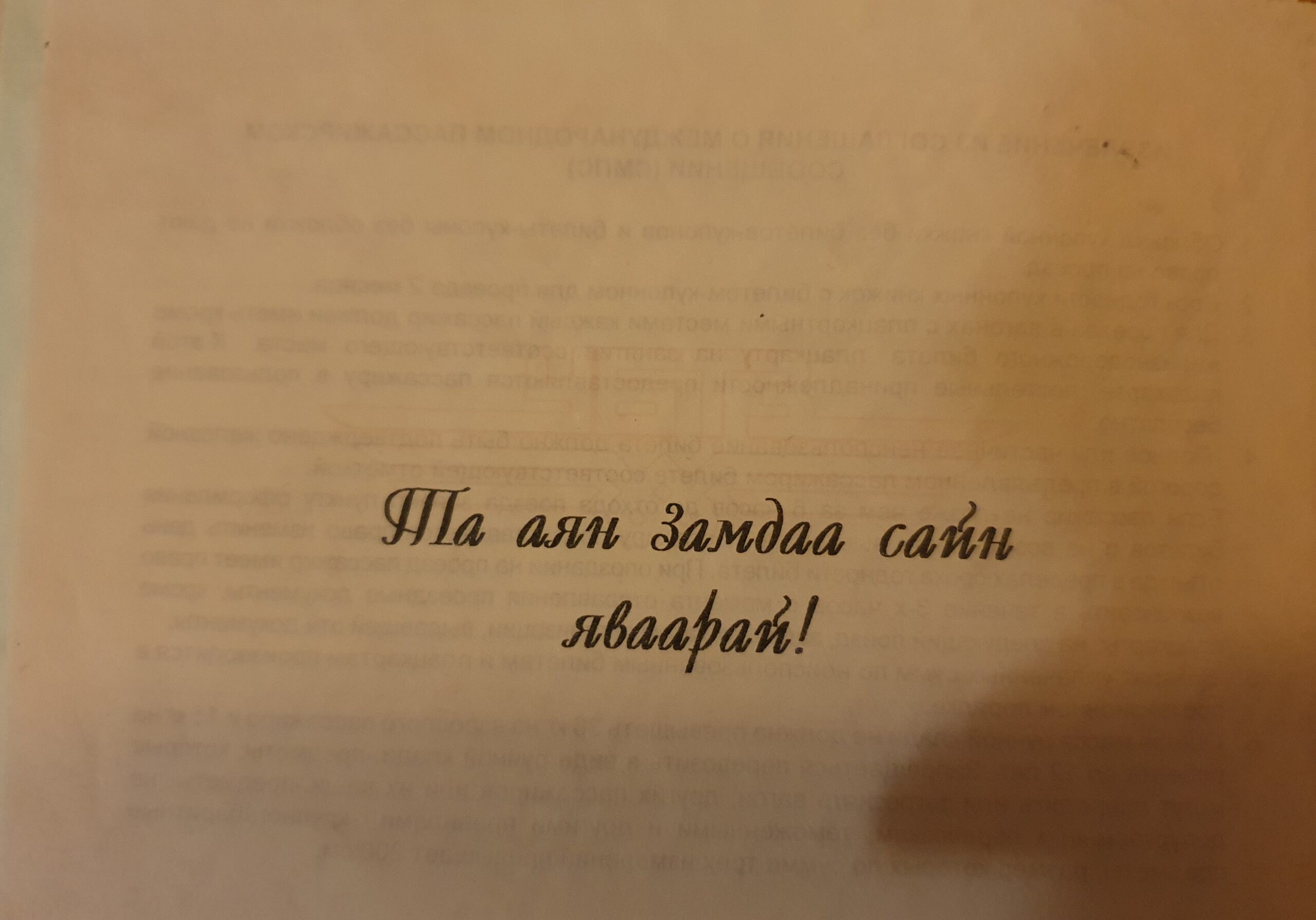 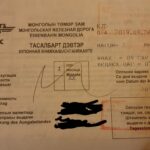 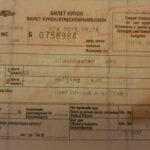 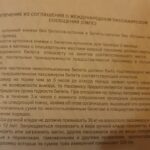 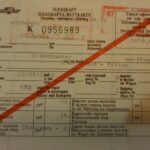 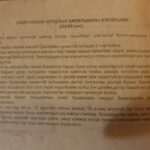 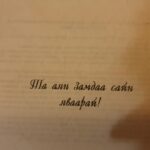 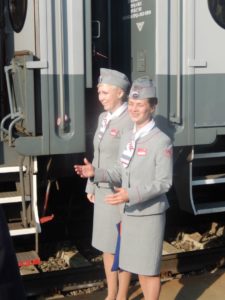 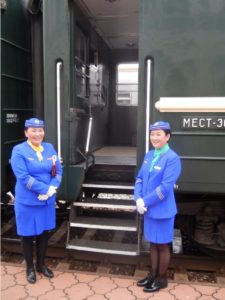 Depending on which train you are and even in what direction you move, in a non stop journey, you will have chances to get out of the train at several railway stations. Some stops are only 2 minutes and you are not allowed out of the train except maybe your head for a quick cigarette puff, if the provodnitsa (the lady who is in charge of law and order in your train compartment) is in a good mood.

At other stations there short 5 to 15 minute breaks and if your quick you can buy some food or drinks from the shops or whenever they are still allowed to enter the platform (which is much less allowed nowadays than I read in several travel guides) from local people selling dried fish, souvenirs, vases (really!) or noodles/ramen.

And then there are a few stations where the stops are longer than 20 minutes up to 1 hour. At those stops you can visit the local station hall or the square in front or maybe occasionally even the city or village. Keep the train in mind though, because it can leave without even a whistle sign! Ask the provodniza whether you can stray from the train as far as you expect to go.

In the late 19th century, the development of Siberia was hampered by poor transport links within the region, as well as with the rest of the country. Aside from the Great Siberian Route, good roads suitable for wheeled transport were rare. For about five months of the year, rivers were the main means of transport. During the cold half of the year, cargo and passengers travelled by horse-drawn sledges over the winter roads, many of which were the same rivers, but ice-covered.The first steamboat on the River Ob, Nikita Myasnikov’s Osnova, was launched in 1844. But early beginnings were difficult, and it was not until 1857 that steamboat shipping started developing on the Ob system in a serious way. Steamboats started operating on the Yenisei in 1863, and on the Lena and Amur in the 1870s. While the comparative flatness of Western Siberia was at least fairly well served by the gigantic Ob–Irtysh–Tobol–Chulym river system, the mighty rivers of Eastern Siberia—the Yenisei, the upper course of the Angara River (the Angara below Bratsk was not easily navigablebecause of the rapids), and the Lena—were mostly navigable only in the north-south direction. An attempt to partially remedy the situation by building the Ob-Yenisei Canal was not particularly successful. Only a railway could be a real solution to the region’s transport problems.The first railway projects in Siberia emerged after the completion of the Saint Petersburg–Moscow Railway in 1851. One of thefirst was the Irkutsk–Chita project, proposed by the American entrepreneur Perry Collins and supported by Transport Minister Constantine Possiet with a view toward connecting Moscow to the Amur River, and consequently, to the Pacific Ocean. Siberia’s governor, Nikolay Muravyov-Amursky, was anxious to advance the colonisation of the Russian Far East, but his plans could not materialise as long as the colonists had to import grain and other food from China and Korea. It was on Muravyov’s initiative that surveys for a railway in the Khabarovsk region were conducted.Before 1880, the central government had virtually ignored these projects, because of the weakness of Siberian enterprises, a clumsy bureaucracy, and fear of financial risk. By 1880, there were a large number of rejected and upcoming applications for permission to construct railways to connect Siberia with the Pacific, but not Eastern Russia. This worried the government and made connecting Siberia with Central Russia a pressing concern. The design process lasted 10 years. Along with the route actually constructed, alternative projects were proposed: 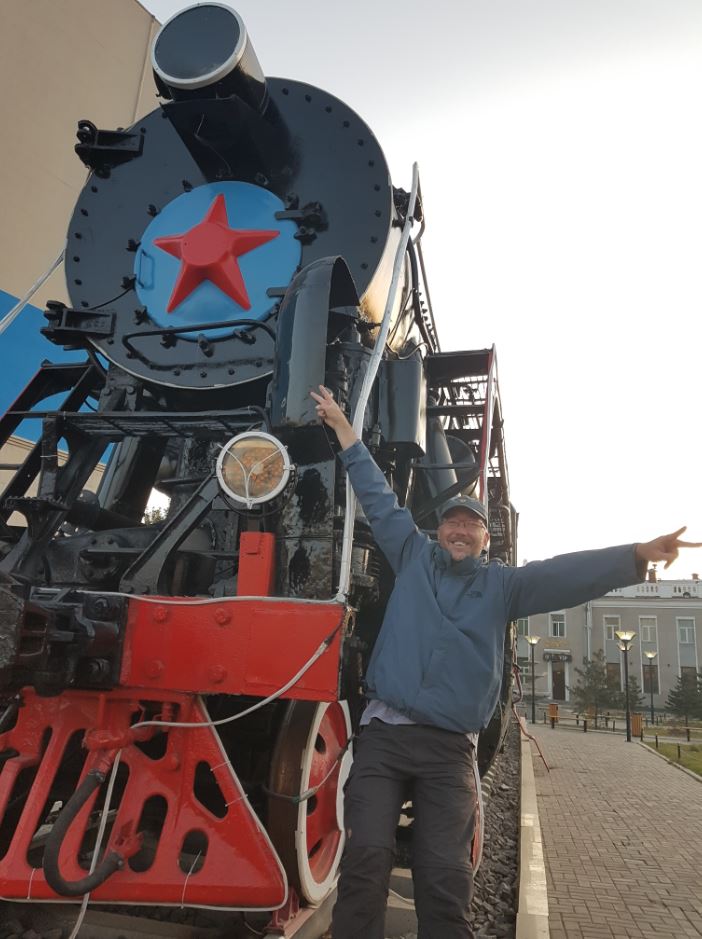 End of the line?

Is Beijing the end of the line? Not really. You can actually travel in a circle using the Trans Mongolia, Trans Manchuria and Trans Siberia lines :-).