What about travel- or hike blogs is the one adventurous undertaking, which everyone is familiar with, but stays somewhat out of the spotlight of most stories?

Yes you guessed it right! Going to the loo in a foreign country…

The loo: There is so much variation in what a loo looks like, that I thought of sharing some of my best and worst (depending on your point of view) experiences of travel loo visits.

Well here are some of my collected international loo stories, not in a specific order but just in the order that they popped up in my mind 💩

Using every sparse inch of toilet paper on a Slovakian loo

We live in 2020, the year of the corona virus outbreak. One of the very 1st changes of human behavior that The Wandelgek noticed was people starting to collect huuuuge amounts of toilet paper at supermarkets and drug stores. Maybe this story puts that somewhat in perspective 😉 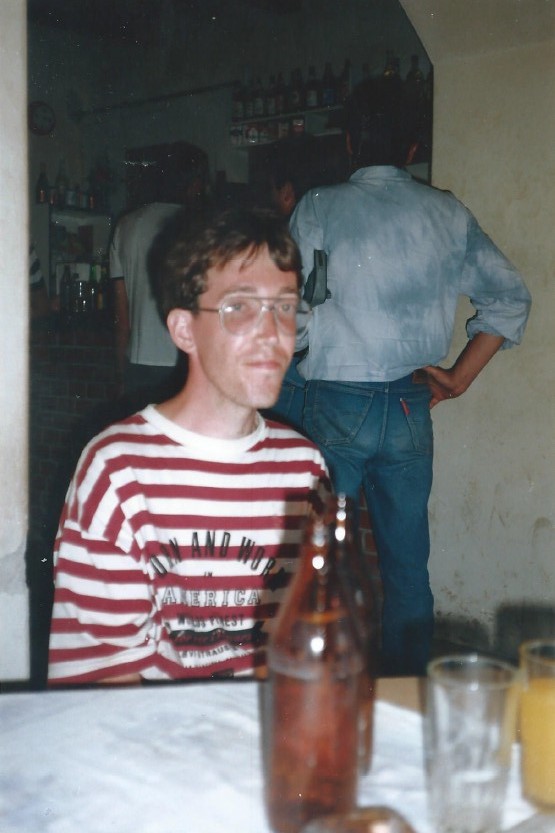 One of my very 1st loo adventures occured while The Wandelgek was canoeing through the very northeast of Hungary and was crossing the Hungarian-Slovakian border for a few hours to visit a tiny village at in Slovakia. In a street with what at 1st sight only seemed to be houses with small front gardens, one of the houses appeared to be a local pub. On the outside this was not visible, but there were lots of people going in and out and the door stayed open. Inside it was indeed a pub. After a drink, The wandelgek desperately needed to visit the loo which was locked. That was strange, because even after ten minutes no-one was leaving that loo. He decided to ask the barman and without even a blink of his eyes, he grabbed underneath the bar and gave The Wandelgek a key and 3 tiny pieces of toilet paper  tissue, which he tore off of a roll.

OK this could become problematic!

The Wandelgek opened the door, sat down and in doubt of wether he should unload the plumbing or not, decided to let go of the freight he was carrying. Then he looked again at the 3 pieces of tissue and despaired 😉

Somewhere in the Mara province of Tanzania, after having crossed the border from Kenya into Tanzania at Isebania, The Wandelgek visited some local farmer hutts and his eye catched this very primitive loo, consisting of a hole in the ground and a wooden plank half on top of it. There was a roof built over it, but it didn’t really take in the consideration that some people like some privacy. Maybe it is better to sit behind a scrub or the nearby kopjes, but you never know whether lions or hyenas roams through the area… 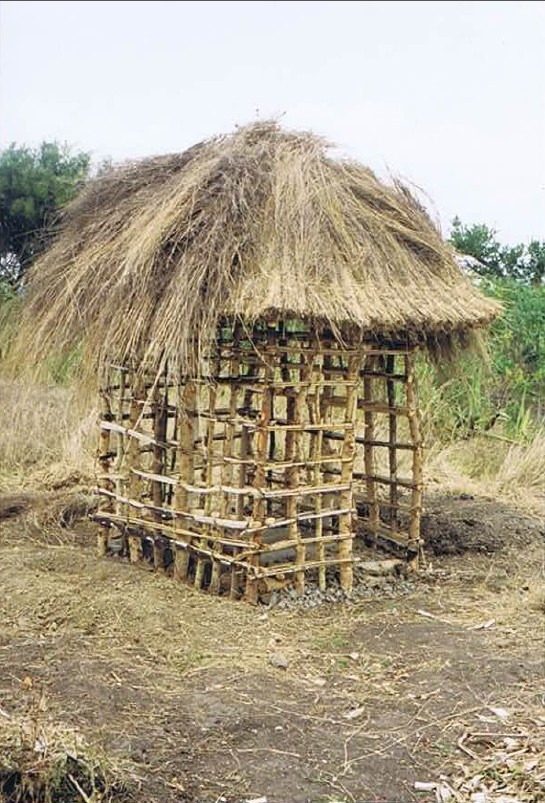 Protection might be the main reason for the fence like building. It is easier to defend the entrance with a stick or maybe a torch then defending yourself sitting in the open…

A little lost loo in the middle of nowhere 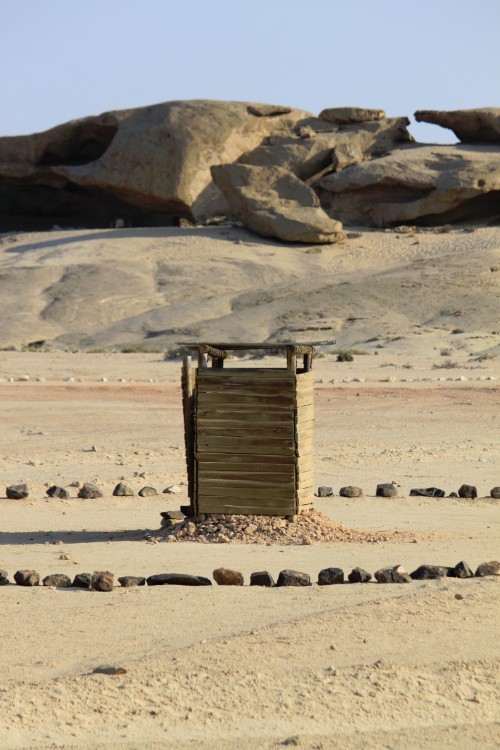 “Is this the most marooned, end-of-the-world-place ever?”, The Wandelgek thought when he crossed the flats of Namibias Skeleton Coast. He kept looking for other life forms for hours and hours, he kept spying for hills or mountains afar, but the only thing he saw was a pancake-like flat landscape until finally he reached some strangely formed barren rocks, and… a loo!

How to get toilet paper when you’re lost in translation?

The Wandelgek was in Saint Petersburg and wished to visit the incredible museum that is The Hermitage, which is located in the former winter palace of the tsar. Before journeying to Russia (this was back in 1997), The Wandelgek was tipped to bring rolls of toilet paper because of a shortage in Russia. He had experienced the same before in 1992 when visiting Hungary and Slovakia. But when he was going to visit The Hermitage he automatically assumed that an esteemed museum like The Hermitage would have enough toilet paper for its guests. They didn’t…

After a whole morning of looking at the paintings of Italian, Dutch, French and British masters of the past, The Wandelgek was in dire need of a visit to the loo. After having done his thing, he looked up and expected to see some toilet paper, but the toilet paper roll holder was empty. He looked around expecting a stack of paper somewhere, but there wasn’t. After flushing the toilet and pulling up the trousers very loosely, and fastening the belt, he left the toilet seeking for paper. There was none near the sinks either. Now he had to go to a nearby reception desk hoping they had some pieces like in the bar in Slovakia.

The Wandelgek didn’t speak Russian, so what to do next. Luckily the man at the desk really looked like he wanted to help. Suddenly The Wandelgek had a brilliant idea. Why not use non verbal sign language, similar to a game of Hints or Mime? Can you imagine The Wandelgek miming the need for toilet paper? 🧻🤣🧻

Best of all…it seemed to work! The man at the desk signalled that he understood and he send a colleague away to fetch some toilet paper… or so The Wandelgek thought.

The woman returned with a roll of paper allright. A roll of stiff wallpaper. It turned out that they really didn’t have anything else to offer…

In 2019 The Wandelgek revisited Russia and things regarding toilet paper have improved significantly.🙃 It is no longer neccesary to import your own.

Creative way to point towards a loo

In 2015, The Wandelgek travelled through Namibia and came to the small village of Helmeringhausen, where he had a short travel/lunch break. When visiting the local loo, he noticed that someone  probably disliked the standard signs for male and female toilets and had come up with a more creative way of visualizing the two different loo’s… 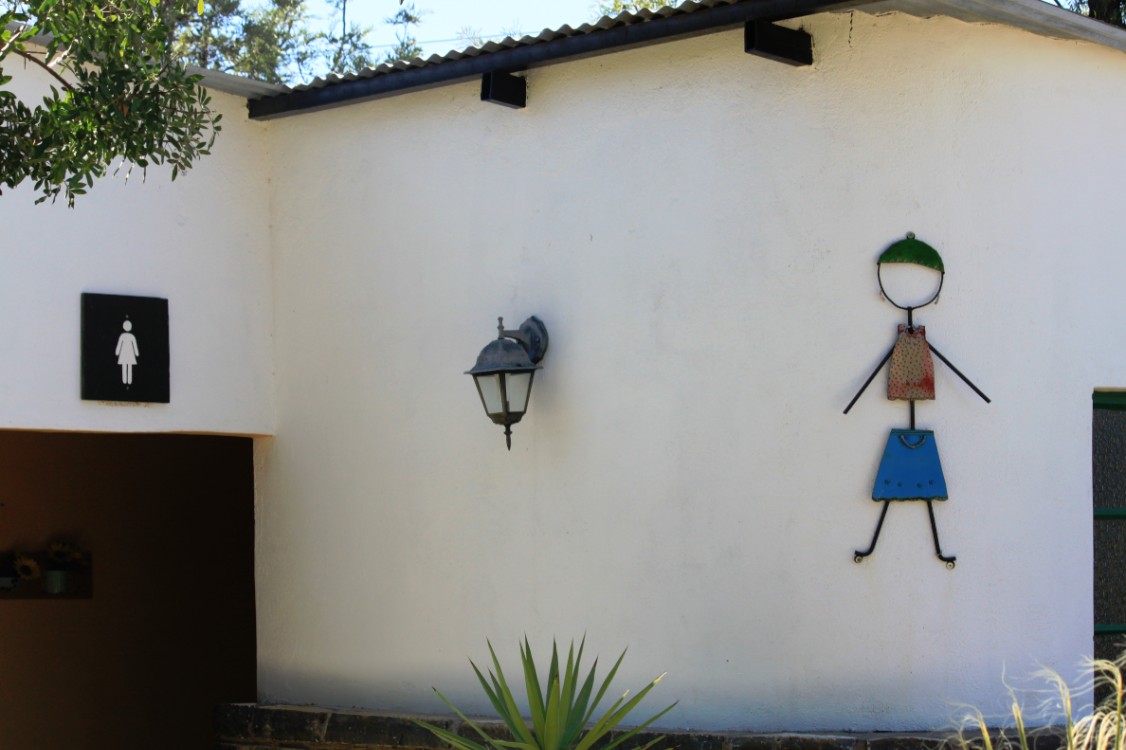 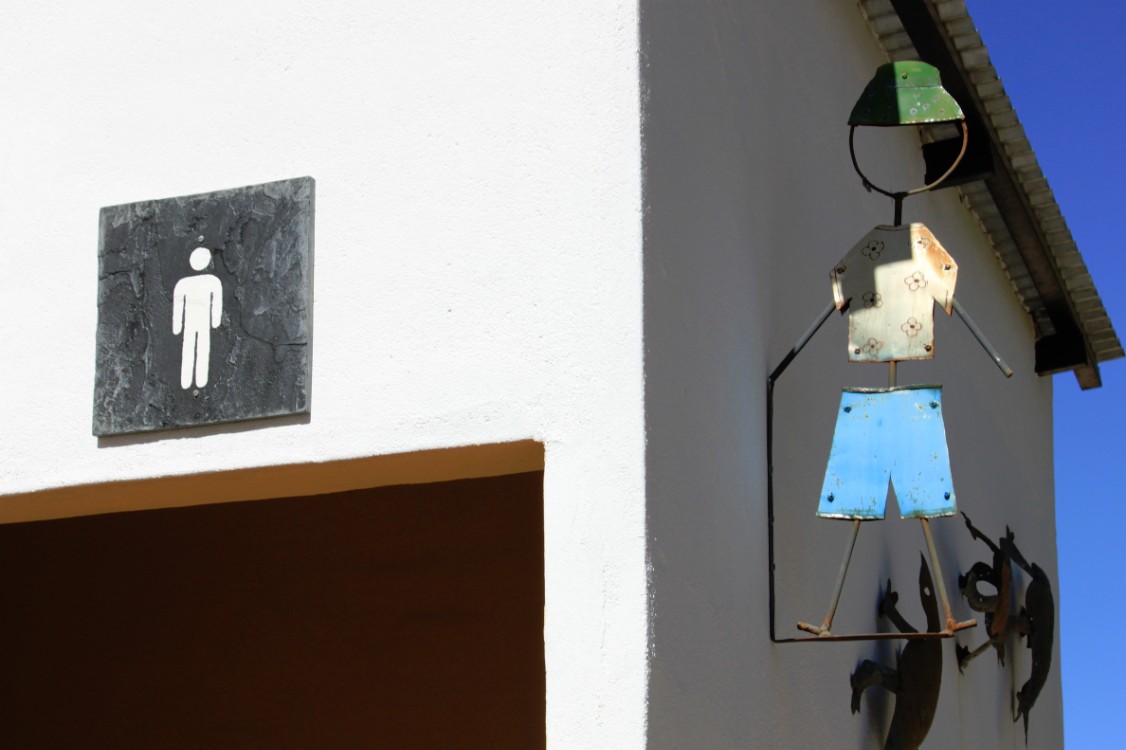 The Wandelgek visited Brussels, the capital of Belgium quite a lot. On one of these visits he was sitting with a friend in restaurant The King of Spain, at the central market square. Brussels is really an awesome place to taste some of the best beers in the world. After some food and drinks his friend went to the loo and here’s what happened when he returned: 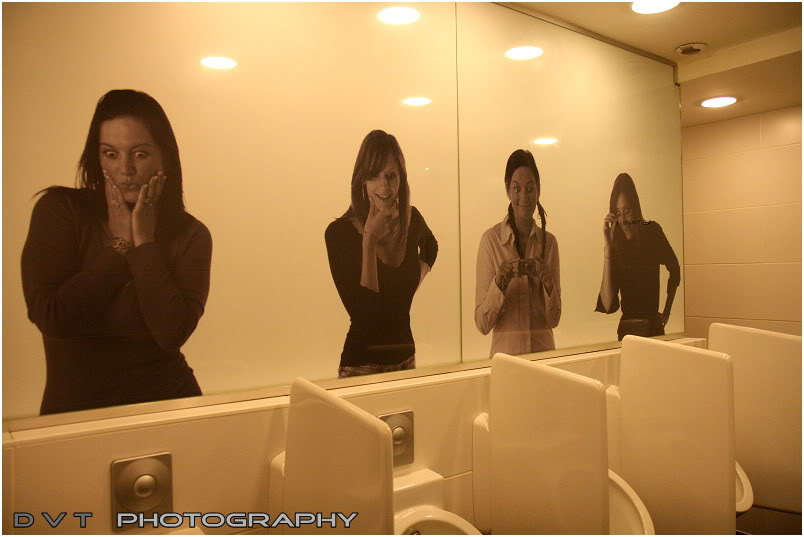 …and yes it was worthwhile😂.

Once upon a time in a loo

In 2016, The Wandelgek travelled through the south of England, visiting the Green Dragon Inn in Cockleford, where he discovered this quite specifically dressed loo, with photographs of a very sexy looking Claudia Cardinale on the wall.She was of course the lead actress in Sergio Leone’s magnificent Italian Western spectacle: Once upon a time in the West. But why these pics hung here??? 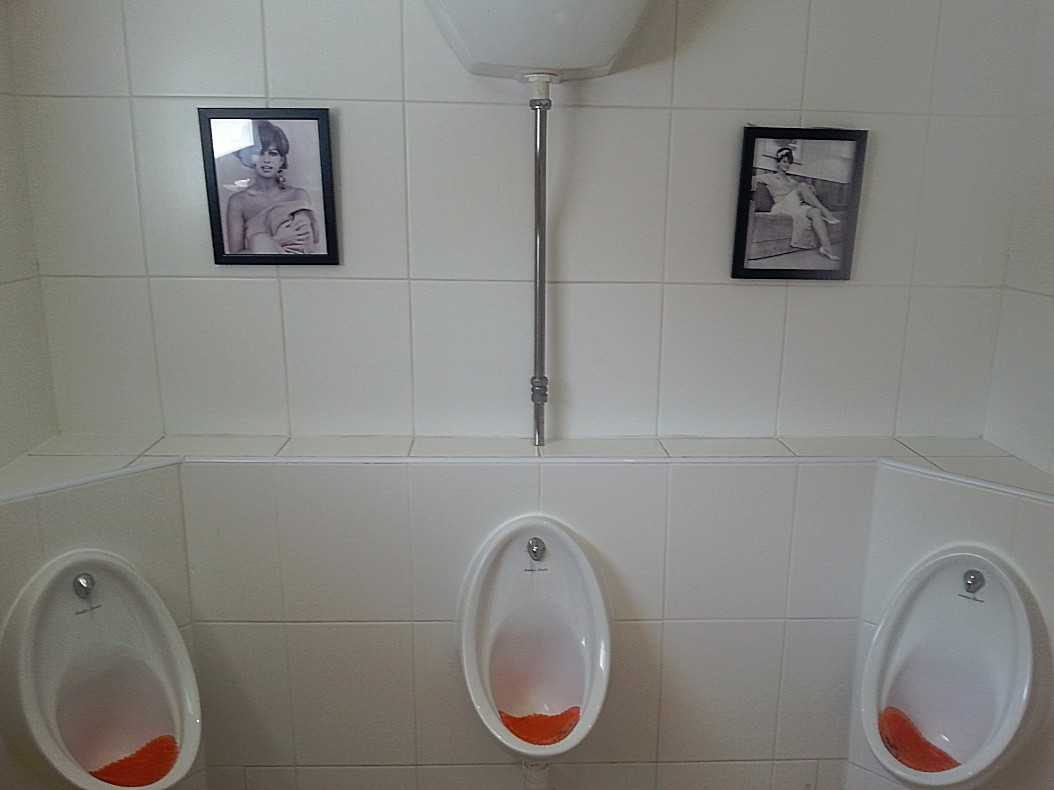 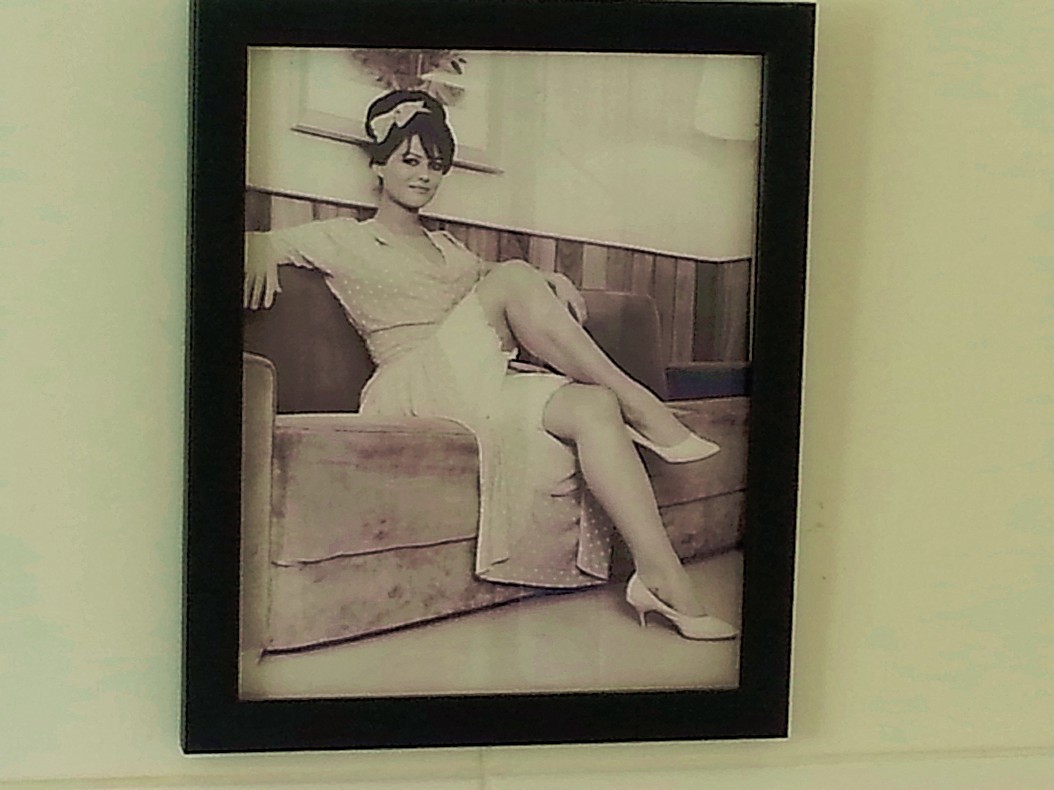 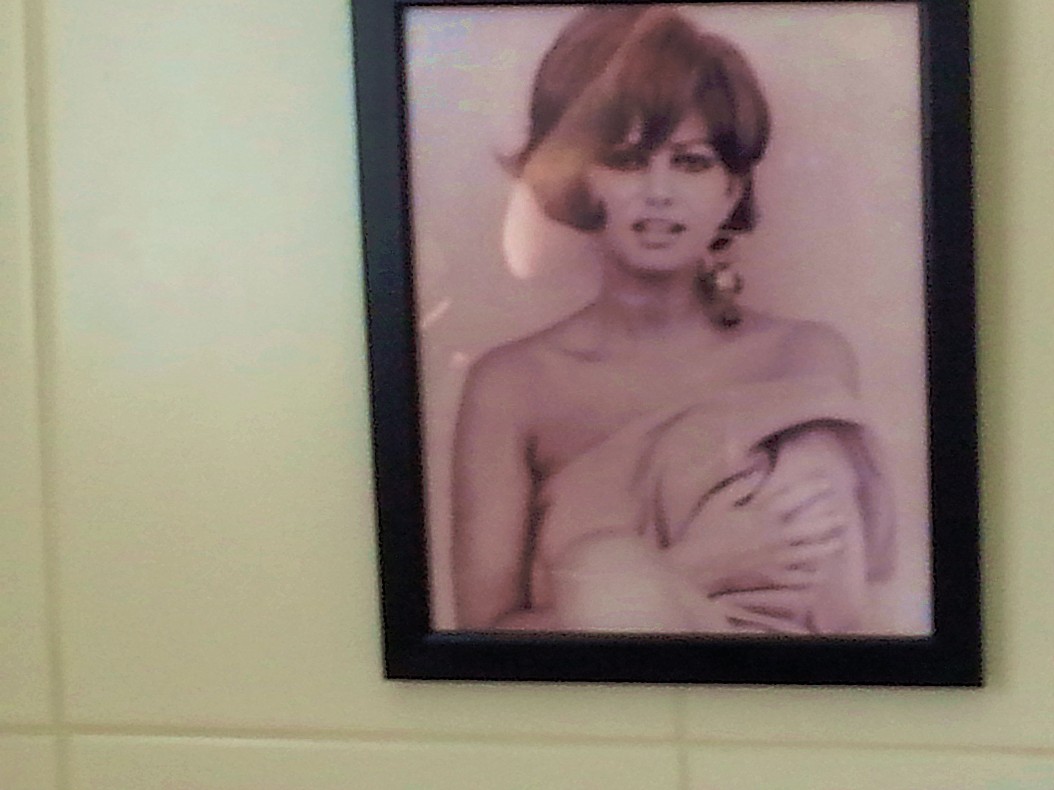 In 2019, The Wandelgek finally revisited Russia and for the very 1st time Moscow.

In Moscow, The Wandelgek visited the… hotel …located in one of the famous Stalinistic Sisters. It is was loaded with expensive art works and marble floors and after walkingthere and inhaling and absorbing the enourmous wealth that surrounded its guests, The Wandelgek suddenly decided he wanted to see its loo. 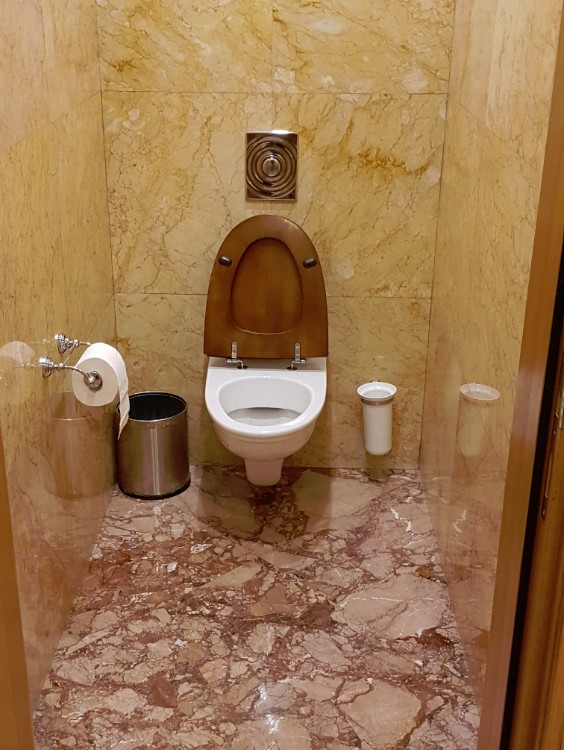 I think I must have shitted golden poop overthere, while surrounded by gold topped Dorian pillars, marble walls and floors and a gold framed mirror. And after washing my hands I dried them with a neatly rolled up towel  from the top of a pyramid like pile and I threw it in a gold decorated bin. I was somehow glad I still wore my formal dress code gear 😉 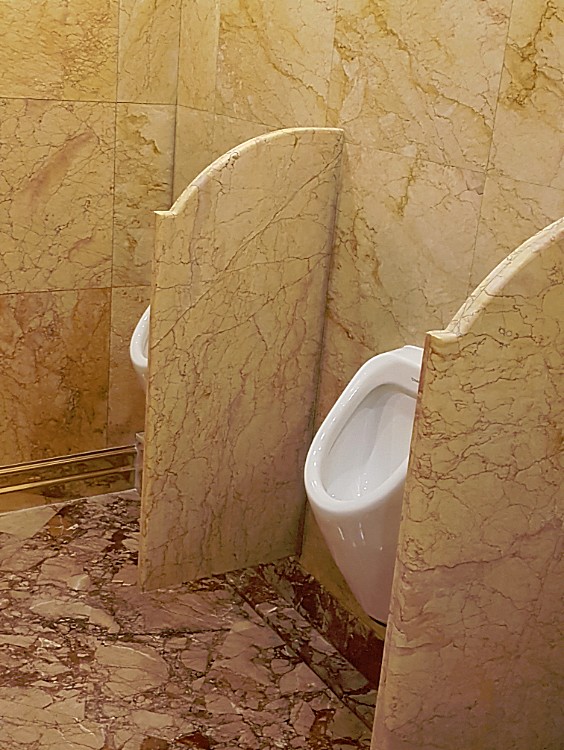 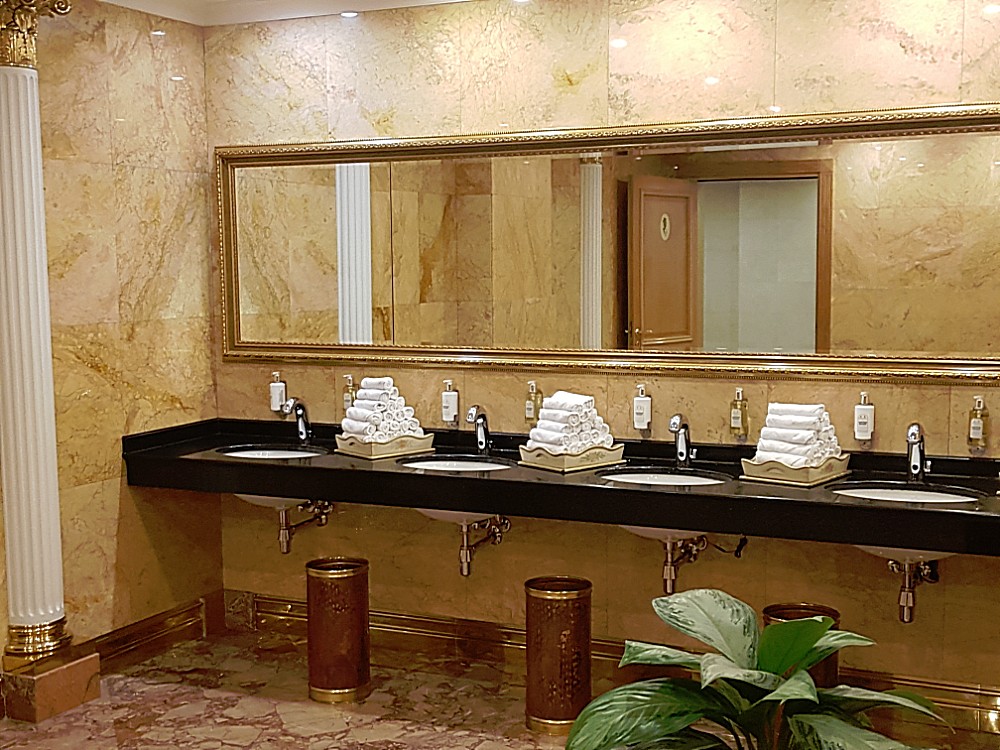 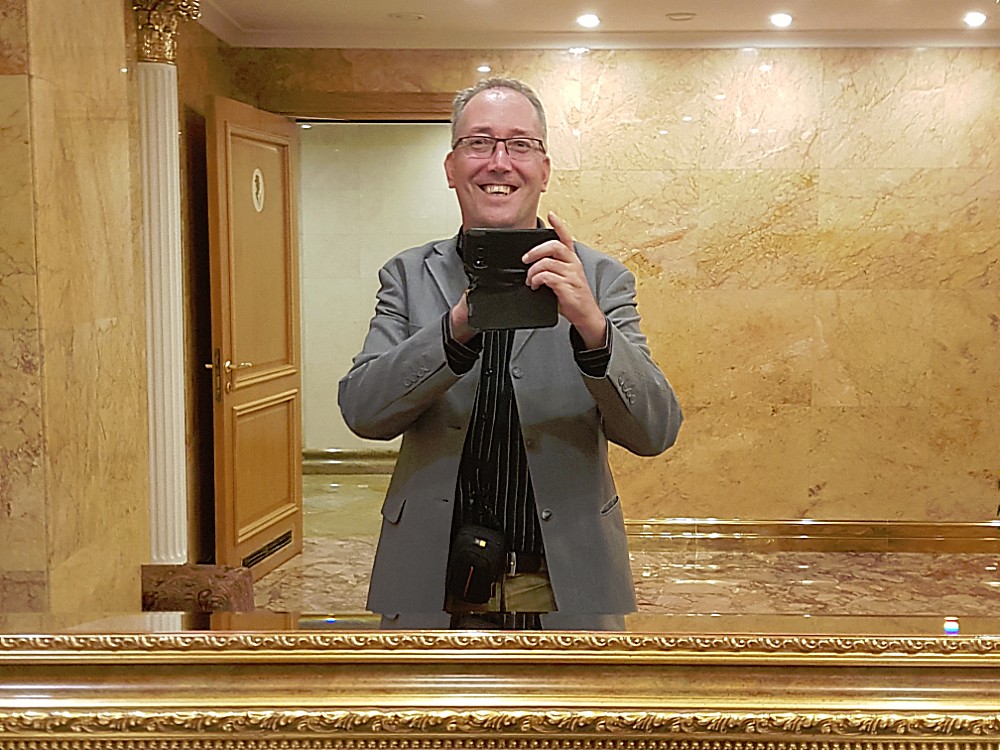 Going to the loo on the Trans Siberian Express is quite an acrobatic feat for most visitors, meaning that you really need to hold your balance while performing😉 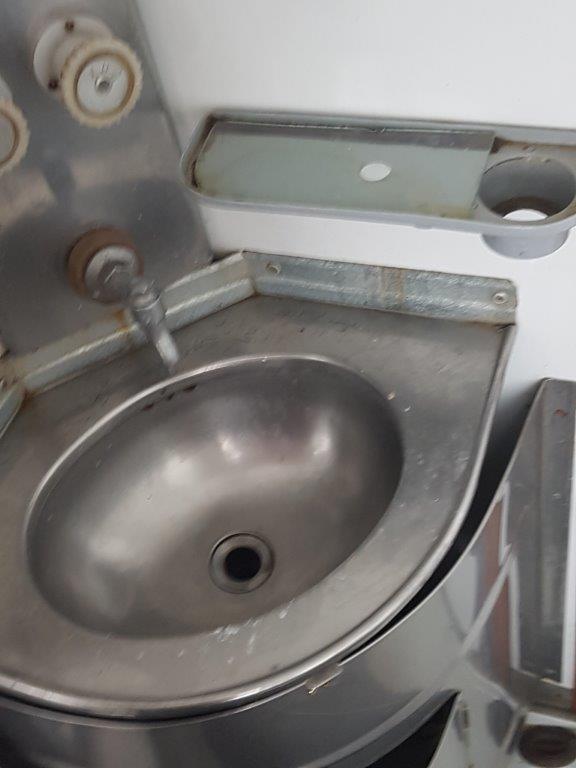 My admiration goes out to the provodnitzas or train stewardesses that do their absolute best to try and keep the carriage that they’re assigned to in ship shape condition 🙏. 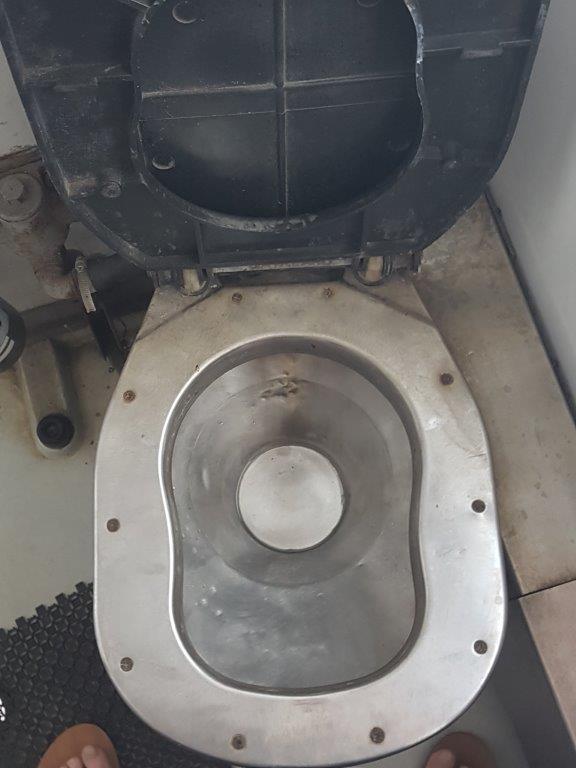 Whoever thought of this as a relaxing loo?

The thought of peeing in a crocodiles jar is quite mad, but someone thought of it and created this loo in Bagani, a small village in northern Namibias Caprivi strip. 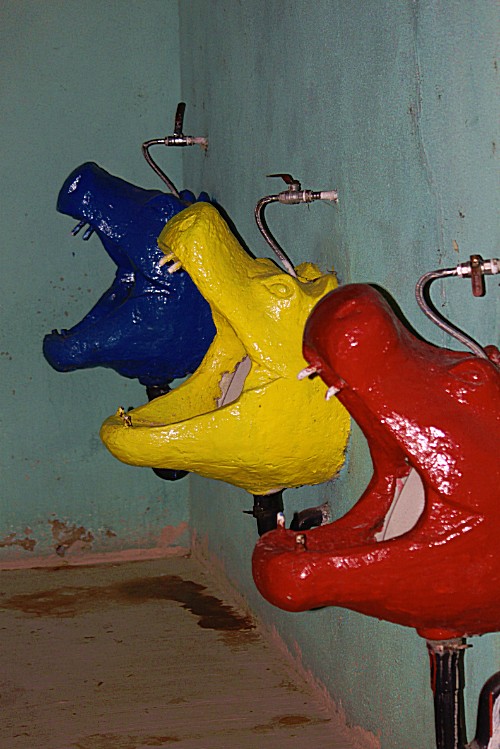 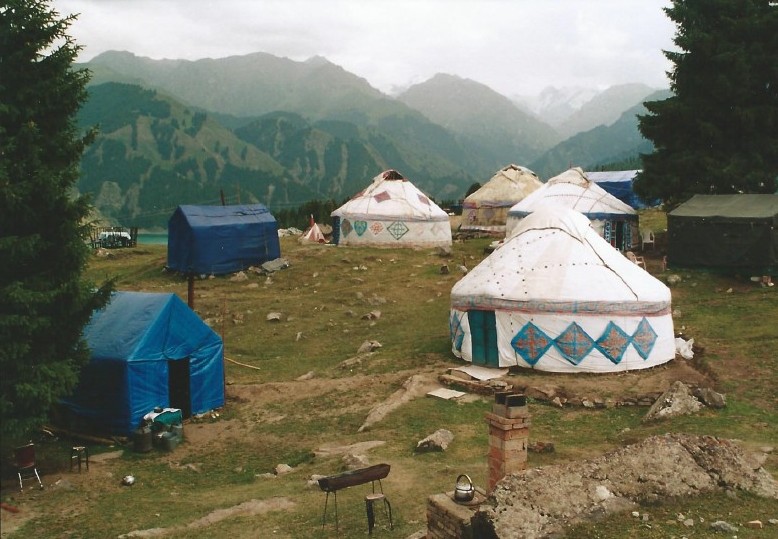 In 2004 The Wandelgek travelled on the Silkroad through Central Asia and visited a small Kazakh yurt/ger campsite at the Tianchi lake. 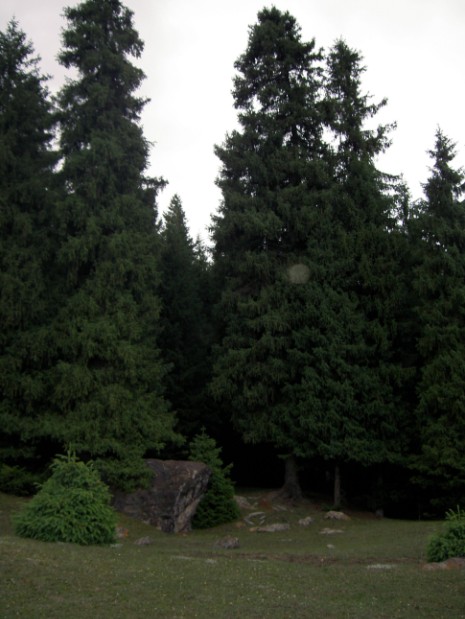 There are no toilets in a ger/yurt and after a good meal, almost everyone was in dire need of letting go of some superfluous weight. But where to go?

Near to the yurt camp was a forest this became known as the loo forest. It was a place which grew in The Wandelgek’s imagination, and which you’d rather not wanted to visit after dark.

That’s it for now folks! Maybe an update will appear after a couple of years 💩😉🚽😇🧻