The Wandelgek went to the city center. When a few days ago he was on a roadtrip through Mongolia, he saw lots of goats kept and herded by nomads.

Goats are the source of an important economic commodity in Mongolia. Thus The Wandelgek decided to visit the world’s largest Cashmere Store in Central Ulaanbaatar: The Gobi Store.

Cashmere wool, usually simply known as cashmere, is a fiber obtained from cashmere goats, pashmina goats, and some other breeds of goat. It has been used to make yarn, textiles and clothing for hundreds of years. Cashmere is closely associated with the Kashmir shawl, the word “cashmere” deriving from an anglicisation of Kashmir, India when the Kashmir shawl reached Europe in the 19th century from Colonial India. Both the soft undercoat and the guard hairs may be used; the softer hair is reserved for textiles, while the coarse guard hair is used for brushes and other non-apparel purposes.

A number of countries produce cashmere and have improved processing techniques over the years, but China and Mongolia are two of the leading producers as of 2019. Afghanistan is ranked third.

Some yarns and clothing marketed as containing cashmere have been found to contain little to no cashmere fiber, so more stringent testing has been requested to make sure items are fairly represented. Poor land management and overgrazing to increase production of the valuable fiber has resulted in the decimation and transformation of grasslands into deserts in Asia, increasing local temperatures and causing air pollution which has traveled to the Americas. 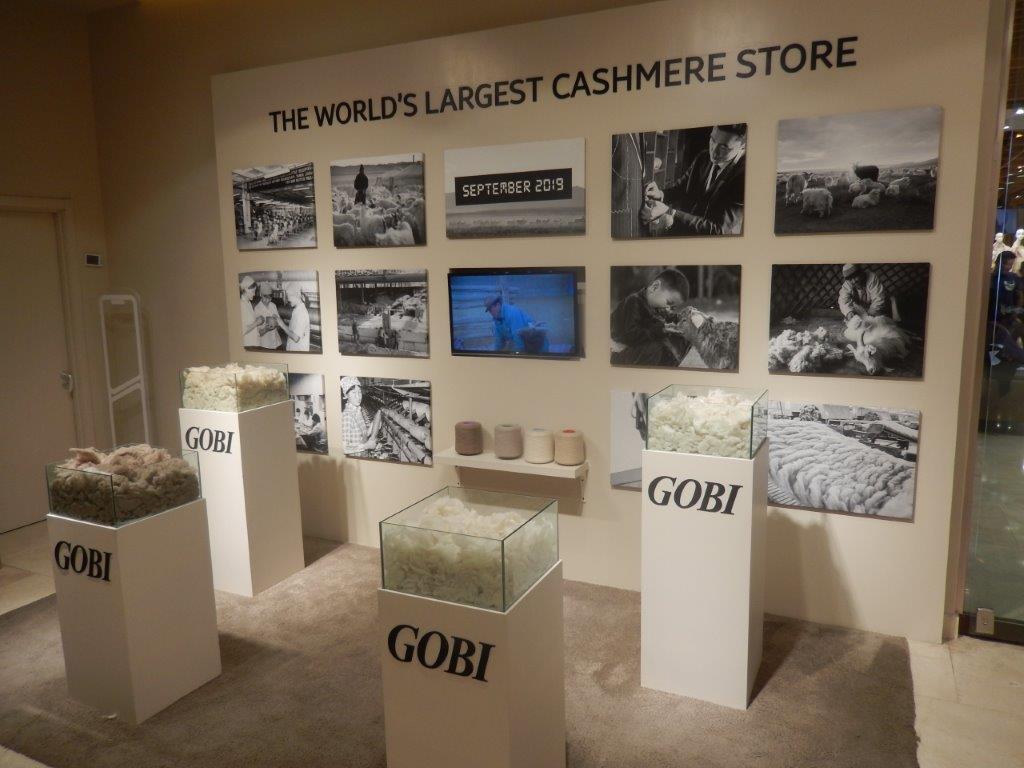 Cashmere wool fiber is used for clothing and other textile articles is obtained from the neck region of Cashmere. Historically, fine-haired Cashmere goats have been called Capra hircus laniger, as if they were a subspecies of the domestic goat Capra hircus. However, they are now more commonly considered part of the domestic goat subspecies Capra aegagrus hircus or the alternate version Hircus Blythi Goat. Cashmere goats produce a double fleece that consists of a fine, soft undercoat or underdown of hair mingled with a straighter and much coarser outer coating of hair called guard hair. For the fine underdown to be sold and processed further, it must be de-haired. De-hairing is a mechanical process that separates the coarse hairs from the fine hair. After de-hairing, the resulting “cashmere” is ready to be dyed and converted into textile yarn, fabrics and garments.

Cashmere wool is collected during the spring moulting season when the goats naturally shed their winter coat. In the Northern Hemisphere, the goats moult as early as March and as late as May.

In some regions, the mixed mass of down and coarse hair is removed by hand with a coarse comb that pulls tufts of fiber from the animal as the comb is raked through the fleece. The collected fiber then has a higher yield of pure cashmere after the fiber has been washed and dehaired. The long, coarse guard hair is then typically clipped from the animal and is often used for brushes, interfacings and other non-apparel uses. Animals in Iran, Afghanistan, New Zealand, and Australia are typically shorn of their fleece, resulting in a higher coarse hair content and lower pure cashmere yield. In America, the most popular method is combing. The process takes up to two weeks, but with a trained eye for when the fiber is releasing, it is possible to comb the fibers out in about a week. The term “baby cashmere” is used for fibres harvested from younger goats, and has a reputation of being softer.

China has become the largest producer of raw cashmere, estimated at 19,200 metric tons (in hair) per year(2016). Mongolia follows with 8,900 tons (in hair) as of 2016, while Afghanistan, Iran, Turkey, Kyrgyzstan and other Central Asian republics produce lesser amounts. The annual world clip is estimated to be between 15,000 and 20,000 tons (13,605 and 18,140 tonnes) (in hair). Pure cashmere, resulting from removing animal grease, dirt and coarse hairs from the fleece, is estimated at about 6,500 tons (5,895 tonnes). Ultra-fine Cashmere or Pashmina is still produced by communities in Kashmir but its rarity and high price, along with political instability in the region, make it very hard to source and to regulate quality. It is estimated that on average yearly production per goat is 150 grams (0.33 lb).

A statue of young goats climbing and being playful. The statue is a reminder of the importance of the goat and its wool for the huge Cashmere production of Mongolia (2nd only after China). 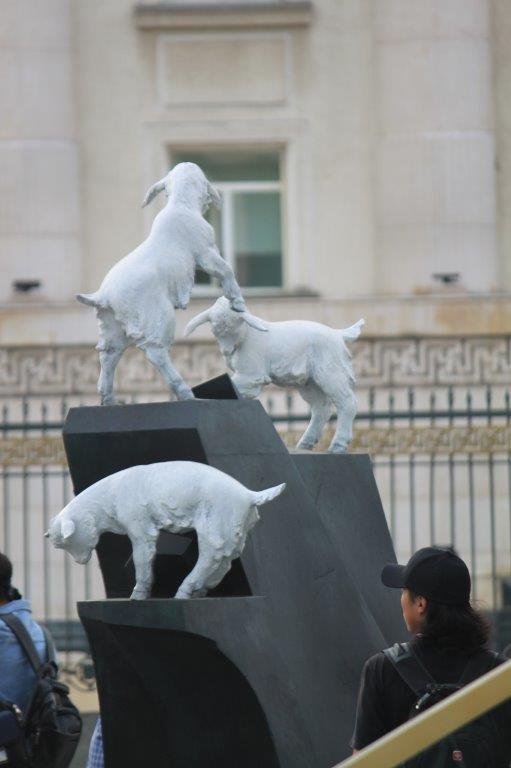 Pure cashmere can be dyed and spun into yarns and knitted into jumpers (sweaters), hats, gloves, socks and other clothing, or woven into fabrics then cut and assembled into garments such as outer coats, jackets, trousers (pants), pajamas, scarves, blankets, and other items. Fabric and garment producers in Scotland, Italy, and Japan have long been known as market leaders. Cashmere may also be blended with other fibers to bring the garment cost down, or to gain their properties, such as elasticity from wool, or sheen from silk.

In the United States, under the U.S. Wool Products Labeling Act of 1939, as amended, (15 U. S. Code Section 68b(a)(6)), a wool or textile product may be labelled as containing cashmere only if the following criteria are met: 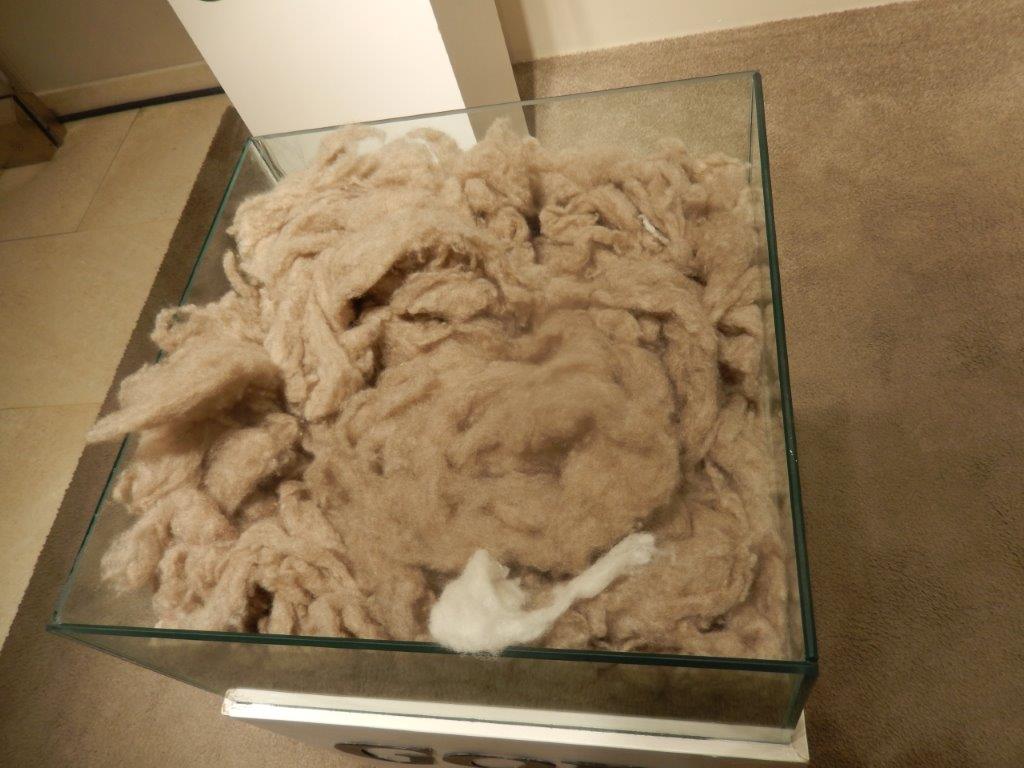 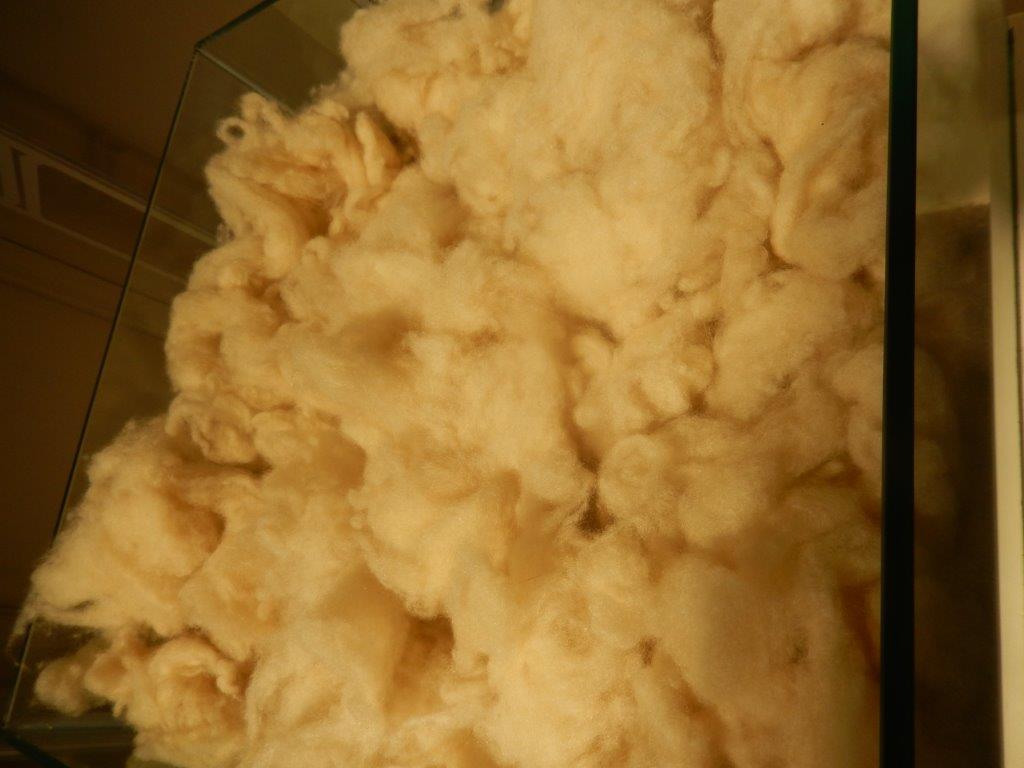 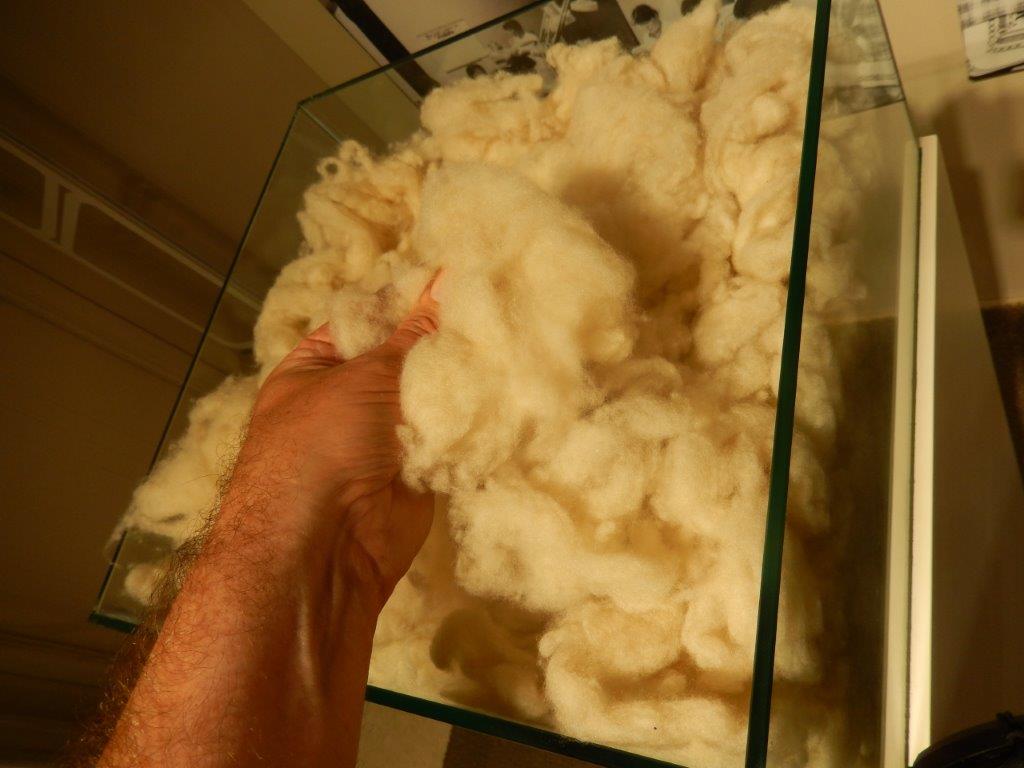 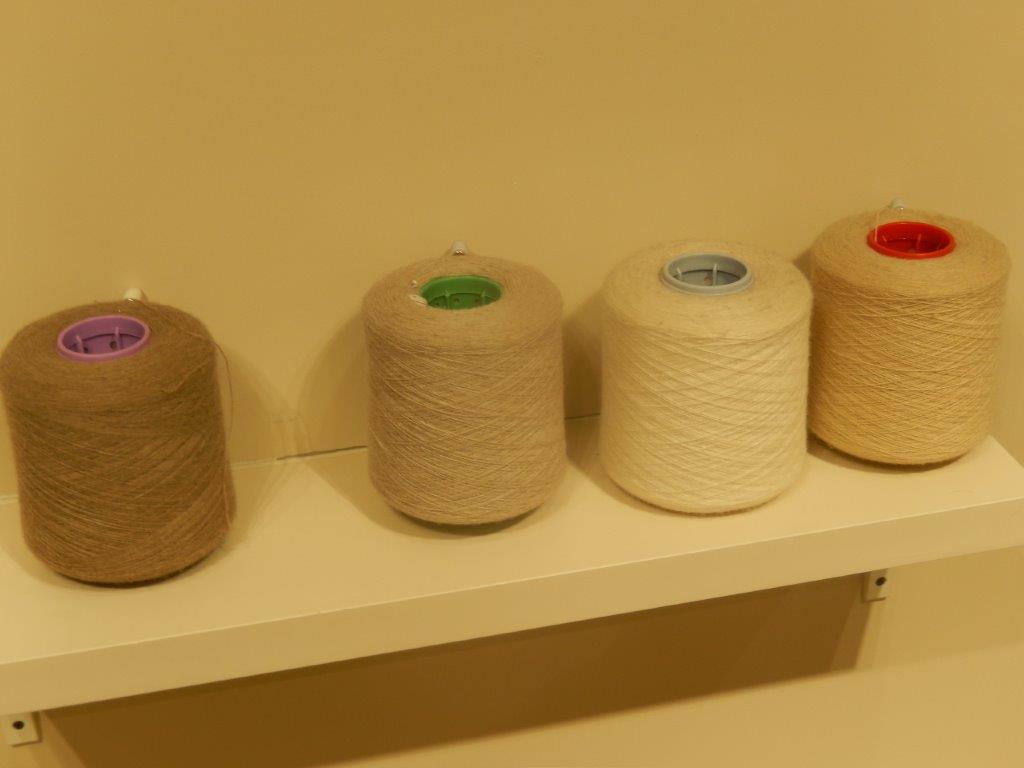 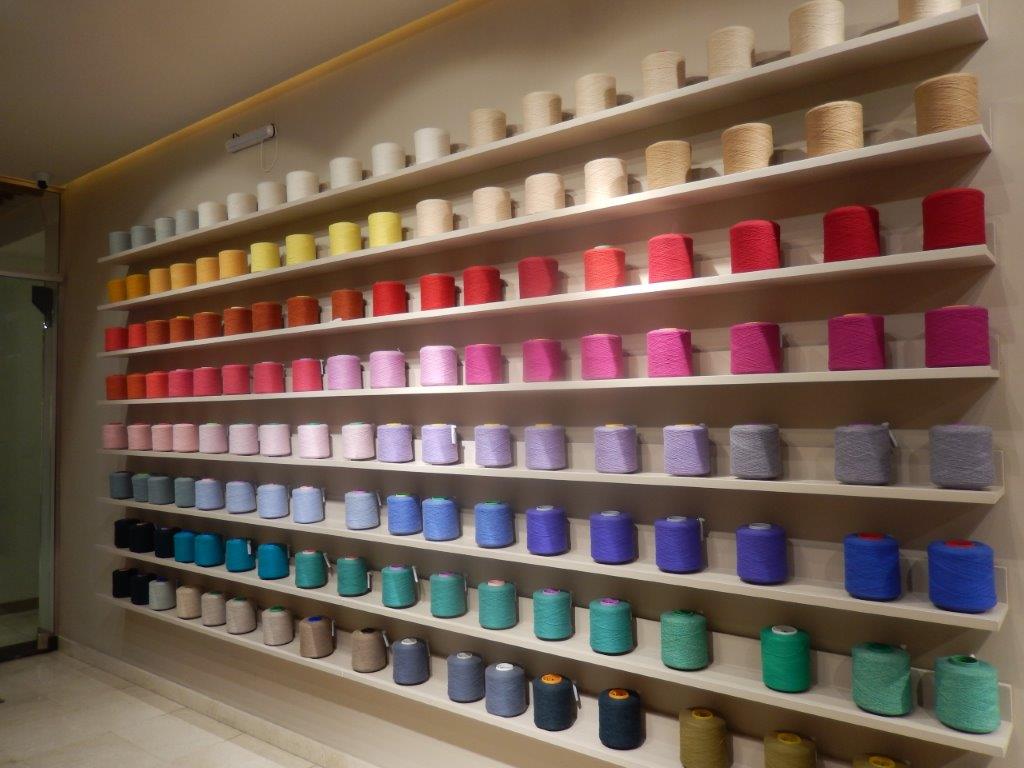 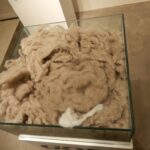 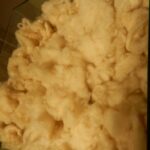 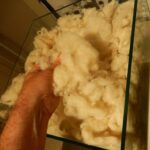 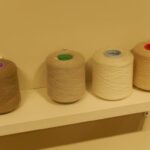 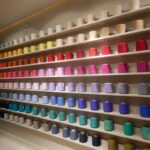 Mongolia supplies 9,600  tons of raw cashmere per year to the world. 15% of the total raw cashmere supplied by Mongolia are being used to manufacture finished goods whereas the remaining 85% are being exported in semi processed form. 70% of the total raw material used to produce finished garments in Mongolia are being procured by Gobi Corporation with the remaining 30% being used by other producers in Mongolia.

The Wandelgek visited this large Cashmere shop in Central Ulaanbaatar.

Next stop for The Wandelgek was the large city square of central Ulaanbaatar named:

Sükhbaatar Square (Mongolian: Сүхбаатарын талбай) is the central square of Mongolia’s capital Ulaanbaatar. The square was named for Mongolian’s revolutionary hero Damdin Sükhbaatar after his death in 1923. The square’s name was changed to Chinggis Square (Mongolian: Чингисийн талбай) in 2013 in honor of Genghis Khan, considered the founding father of Mongolia, but the original name was restored in 2016. The center of the plaza features an equestrian statue of Damdin Sükhbaatar, while a large colonnade monument dedicated to Genghis Khan, as well as to Ögedei Khan and Kublai Khan, dominates the square’s north face directly in front of the Saaral Ordon (Government Palace). 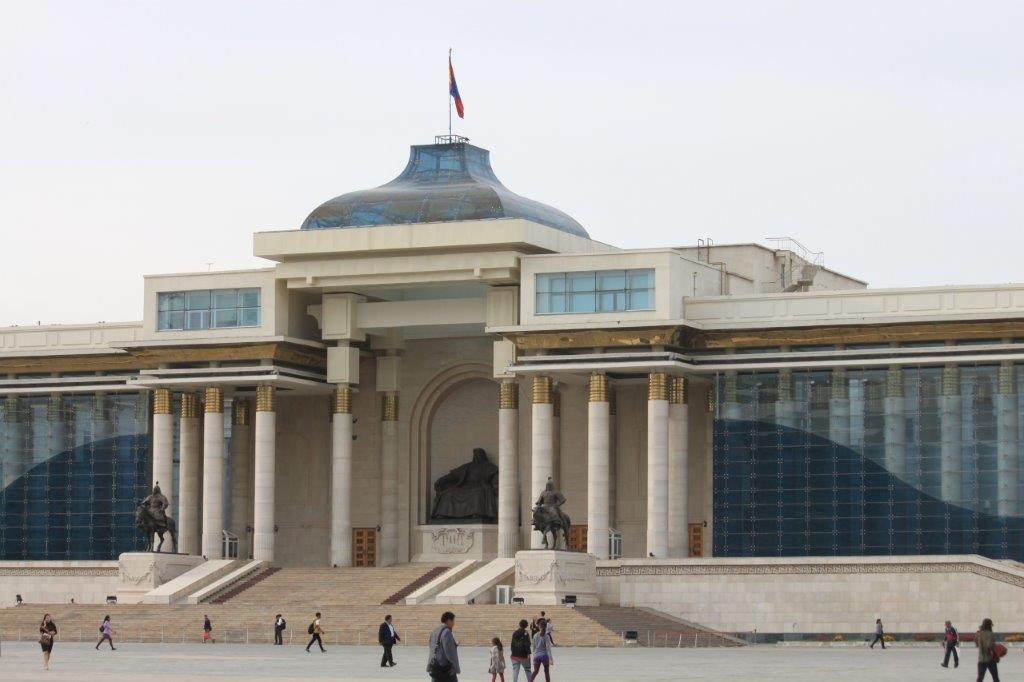 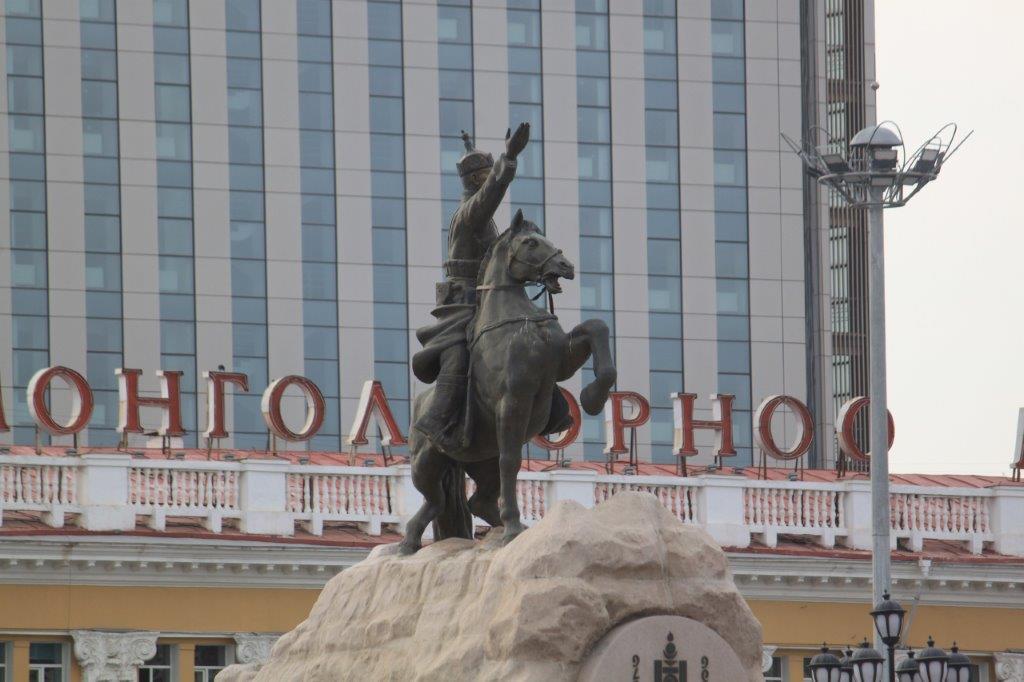 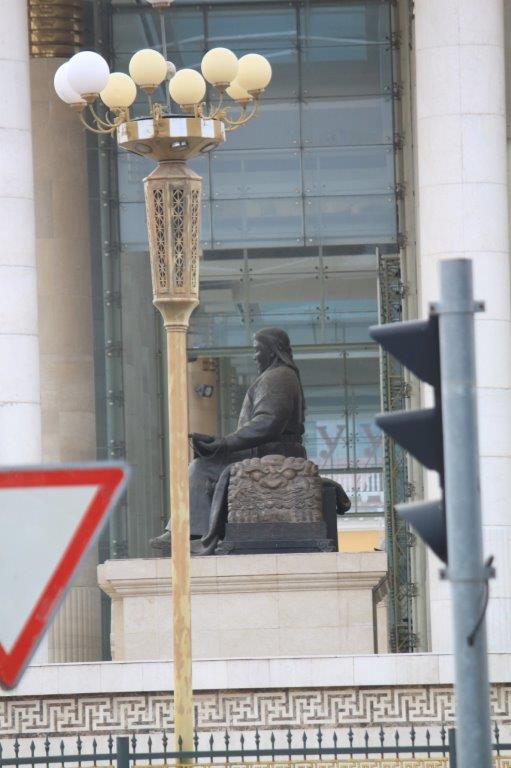 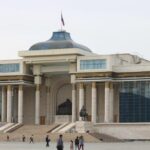 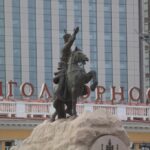 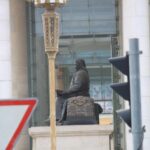 Government Palace (built in 1951 on the spot formally occupied by the national theater or “Green Domed Theater”) dominates the north side of the square. It is fronted by a large colonnade monument to Genghis Khan, Ögedei Khan, and Kublai Khan, completed in 2006 in time for the 800th anniversary of Genghis Khan’s coronation. Prior to its demolition in 2005, Sükhbaatar’s Mausoleum, the former burial place of Damdin Sükhbaatar and Khorloogiin Choibalsan occupied the area just in front of the Government palace. On the square’s western side sits the headquarters of the Ulaanbaatar Bank, Ulaanbaatar City Administration building, often referred to by locals at “the Death Star” because of its dark exterior, the headquarters of Golomt Bank, the Mongolian Stock Exchange building (formerly the Eldev-Ochir Cinema: 1946–1948), the Mongolian Telecommunications Building, and the Central Post Office. The eastern side of the square is flanked by the Central Cultural Palace Building and State Ballet and Opera House, built between 1946 and 1949, and the Central Towers, a glass and metal skyscraper completed in 2008. Just east of the Government Palace, on the square’s north-east corner, sits the former home to the State Printing Press, a white two story building designed by German architect Kavel Maher in the 1920s, which re-opened as the Galleria Ulaanbaatar Shopping Mall in 2018. To the south sits the old Lenin Club building (built in 1929) located right next to the modern sail shaped skyscraper, Blue Sky Tower. Besides the centrally located Sükhbaatar monument, several other statues dot the square’s perimeter including one of former president Jamsrangiin Sambuu on the north-western corner, and another for slain revolutionary leader Sanjaasürengiin Zorig across the intersection on the south-western corner (in front of the Central Post Office).

Near the Gallery of Modern Art, which The Wandelgek didn’t visit because it was closing within 10 minutes of his arrival, he saw some UB schoolgirls dressed in uniforms. School day was ending too… 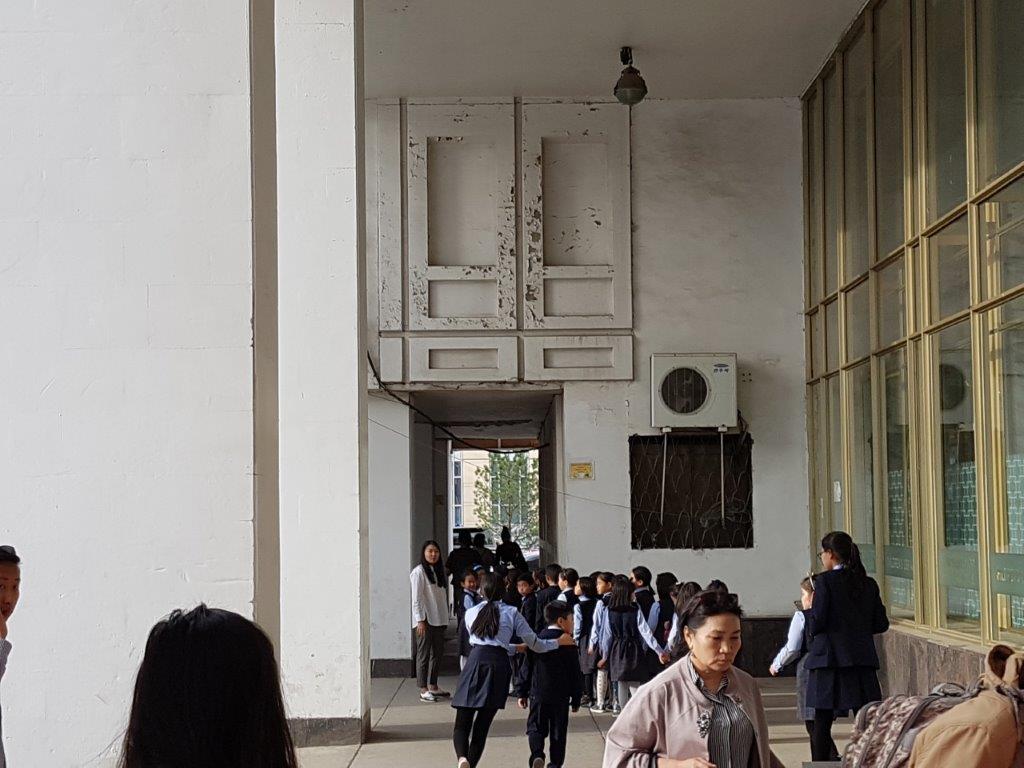 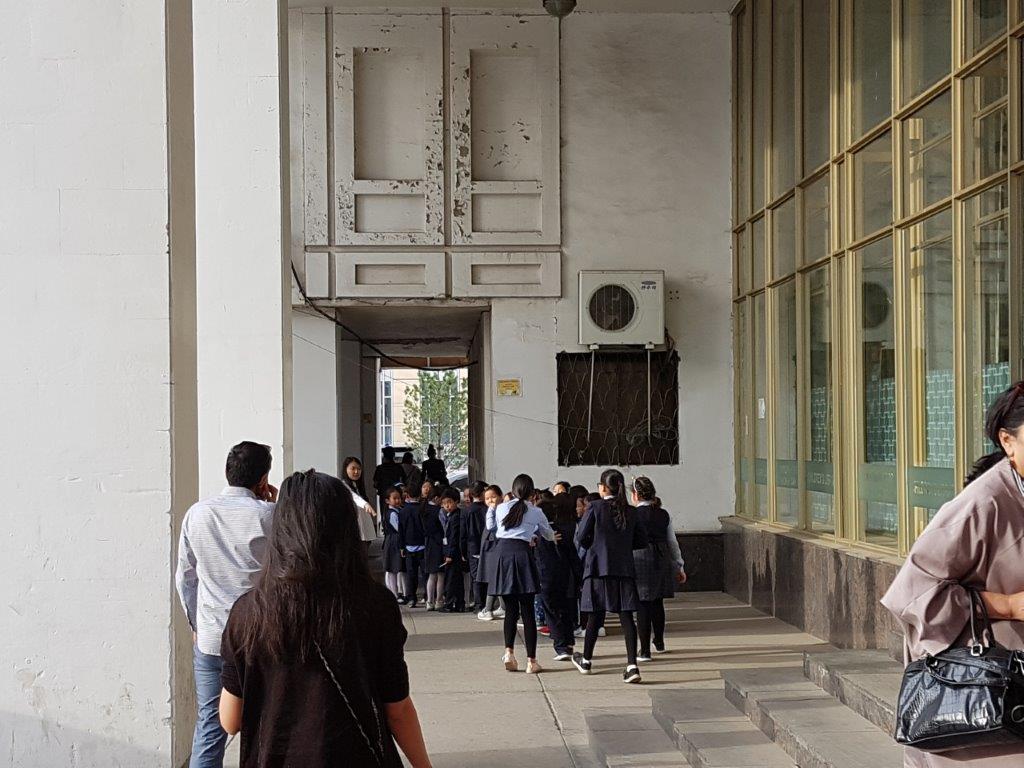 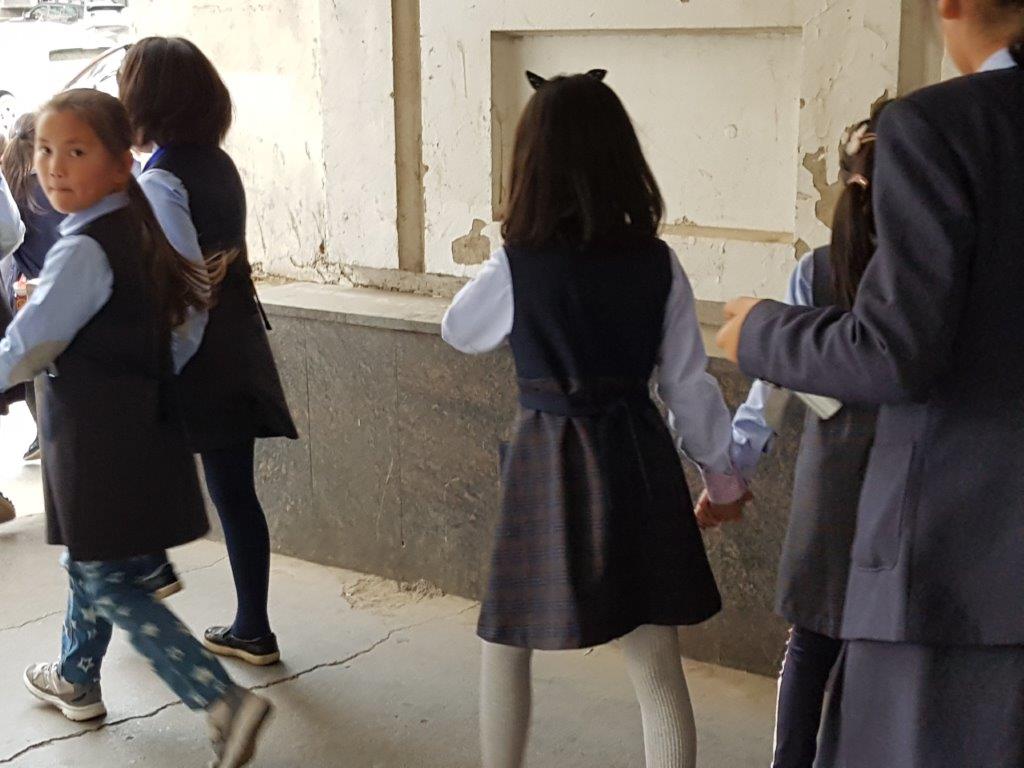 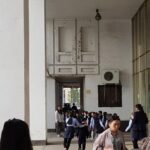 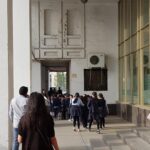 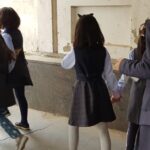