↓
Home→Reizen→Noord Amerika→Groenland→40. Greenland: Lost in the fog – About weather conditions and a prolonged stay in Aasiaat

The next morning, The Wandelgek looked out of his hotelroom window and the world looked like this: 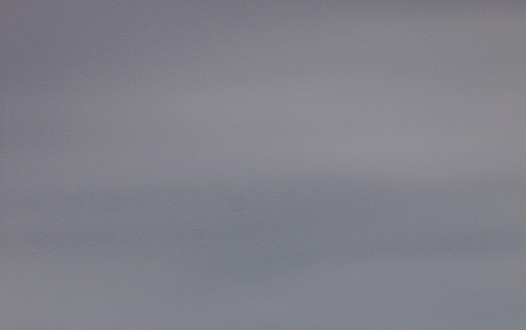 I should have seen the red flag here, but still optimistic I went for breakfast at the restaurant, packed my last things and waited for the transfer cab that would bring me to the airport.

I think we were now 1.5 hours later and now the view was like this:

After checking in and after passport checks, The Wandelgek sat down in the large departure hall of the Aasiaat airport.

The plane that would carry him to Kangerlussuaq was already on its way from Ilulissat and The Wandelgek still had the idea that he would be leaving on a jetplane (oops propellor plane) in between about now:

I mean, we put men on the moon, we defeated the flue and computer, mobiles and internet are now forming a global communication network which enables us to reach out to anybody on this planet within a fraction of seconds.

We humans surely must have found a means to navigate through some fog?!?!

Well we apparently forgot and I was dead wrong.

An information desk officer of Air Greenland informed us that the plane that was circling for a while above Aasiaat had now resumed its trajectory towards Kangerlussuaq, without being able to land.

We, the travellers were going to be booked on another later plane which would bring us to Nuuk and from there we would fly on to Kangerlussuaq. This meant The Wandelgek would miss the international flight to Denmark.

Now before The Wandelgek booked his travels to Greenland he had already read a lot about the weather conditions in Greenland which really could influence travel. The heavy storm yesterday was an example of that, so was the heavy fog today..

Aasiaat was located in an island amidst of a large archipelago which was an ideal area with ideal conditions for sea mist.

After he got rebooked, The Wandelgek sat down and looked through the windows of the departure hall to see whether the fog was lifting…

The plane to Nuuk could not land either and after some circling and waiting for the mist to disappear it went on towards Nuuk.

In the mean time, the airport personel had been providing us with dinner and afterwards they rebooked us to flights for the next morning, because there were no flights arriving or leaving that day.

It was about 14.00 o’clock when the sea mist started to lift very quickly and the rest of the day, The Wandelgek looked up at a beautiful but taunting clear blue sky…

There was another problem to be solved. The sjömanshjemmet was fully booked again, so The Wandelgek could not stay there for another night. The airport personel and the agents of Greenland travel had found alternative accommodation which were some barracks near the shore that were used for student housing during the year, but were empty now that summer had artived.

They were not as luxureous as the Sjömanshjemmet, but The Wandelgek actually loved the solutiin which was a bit more adventurous. It was allowed to go to the Sjömanshjemmet for dinner and drinks, but a few other stranded Danish passengers that were also accomodated in the barracks decided to cook for themselves and invited The Wandelgek to join in. He didn’t have to think long about that offer and gladly accepted.

Before dinner however, there was loads of time to visit Aasiaat properly and so he did

For that visit in “stolen” time, see my next blogpost about my Greenland adventures…