On January 17, 2017 at about 5.00 in the dark and early morning an electricity power supply division unit of Tennet malfunctioned leaving a densely populated area around Amsterdam and 360.000 families without electricity: no light, no hot water, no network telephone/internet , but there was more… Traffic lights didn’t work which caused huge traffic chaos and jams. The national 911 (112) telephone center did work but the network got overloaded because of the sheer amount of calls due to the electricity failure. People in need couldn’t immediately reach 911 and this led to some casualties. I sincerely hope that those who did call and reached 911 were all sincerely in need of help. Otherwise they just added to the death of people. Think before calling 911. And then there was the public transport system without electricity which meant no trains, underground/metro and trams. This caused also a lot of trouble in the rest of the Netherlands because the automated system for directing train drivers and personel to the right train locations and navigating trains to where they’re supposed to be didn’t work either.

On March 27, 2015 began at the 380-kV Tennet in Diemen, one of the largest power failures ever in the Netherlands.

The power outage began at 9.30 am due to a technical fault in a power station in Diemen.

An hour later the problems were solved, but it took a long time before the power supply in North Holland and Flevoland was completely restored.

Rail traffic has been severely affected by the power outage. In North and South Holland, Utrecht and Flevoland people will have problems travelling by railway all day.

The traffic to and from Schiphol airport experienced problems. There are about twenty canceled flights.

Because of the power failure traffic lights on the road were not working. Therefore, there were more traffic 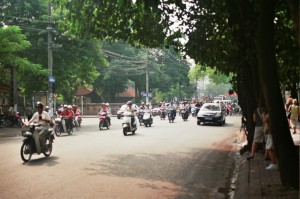 Power cables parallel to this crowded streert in Hanoi…

Because of the power failure traffic lights on the road were not working. Therefore, there were more traffic accidents. Also traffic signs above the highway did not work.

Because of the failure many people got stuck in elevators.

Also part of the public transport in Amsterdam was out of order.

In short, in our Western society a power failure causes huge problems, but what about abroad and especially outside Europe?

In Tanzania the Wandelgek did not witness many power failures, because he was backpacking and almost always slept in a tent. You don’t need power supply in a tent.

But on the day that the Wandelgek traveled home something happened.

The Wandelgek had just returned from a stay on Zanzibar (diving, snorkeling with dolphins, beautiful beach walks, etc.) and was at the international airport of Dar es Salaam where he arrived early, leaving time to get a diner in the restaurant. When he ordered a meal and some other travelers at the table were talking about the last trip through Kenya and Tanzania, suddenly the power went down. The entire restaurant was pitch dark (outside it was already dark) and in the kitchen all microwave ovens had stopped working, so no meals could be served. After recovering from the shock, the Wandelgek looked through the windows and saw the runway lights burning. But that was all. Whatever the cause of this power outage was is still a guess. 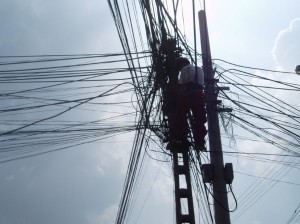 In Vietnam, there were many power failures and that is not surprising when you see the old-fashioned power network which is still above ground.

It consists of wooden pole structures with power cables attached to the top and occasionally a cable branches of to a house or another building. When I saw this for the first time, I thought: What if it rains hard?

In the big cities those poles with power lines often get so crammed with connections that the top is slightly similar to a ball of wool after a cat has played with it for a while. 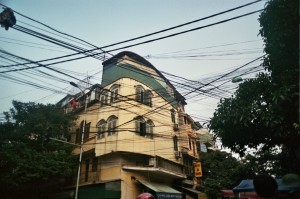 Spiderweb of power cables at an intersection…

At intersections you’ll see cobwebs of power cables over your head. 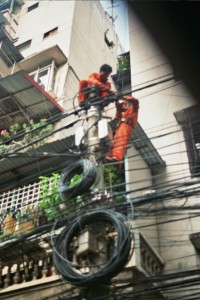 Trying to entangle the knot…

When The Wandelgek stayed in Hanoi, he experienced three power failures.

The first time he was standing underneath a hot shower and suddenly the lights went out and it was pitch dark in the windowless shower cabin, after which the temperature of the water began to decline drastically. After some cursing followed he tried to find the water taps to turn them off quickly. Then he tried to find the door to bring in some light from the bedroom (which did have windows). That bedroom began to get very hot because the air conditioning had also stopped. Outside it was raining. Mmmm, power outage and rain?!?! 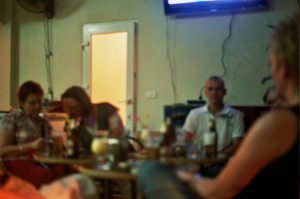 When it gets later and jollier, the photography becomes more diffuse…

The second time was a much larger and longer power outage in the evening. The Wandelgek had gone to a local cafe living room to drink some cold beers. In this pub was a big freezer full of local beers like Tiger and Saigon. Delicious, until the power failure began. Very soon the beer was no longer cool (yes Vietnam is also at night hot and humid) and then you discover a local custom. In cafes owning small refrigerators, the beer was not chilled. But do not worry, for every problem there’s a solution. Innovative Vietnamese pour you a Tiger beer in glass after dropping ice cubes in it … Raaaahaaahhaaa ..! @ 3!% @ Being a true admirer of the noble barley beer, my neck hairs erected and I gasped with horror.

Yet, after a few days of Vietnam you won’t know and won’t want it any different, because anything is better than warm beer … 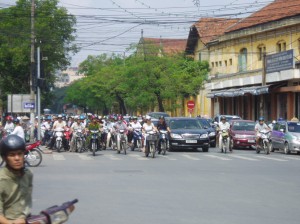 The third power failure was the shortest. This lasted 10 tense minutes. The Wandelgek was with some other travelers on foot towards the old quarter of Hanoi and wanted to get some cash from two ATMs. Well you stick your debit card in the machine, typ in your PIN code and choose an amount of money, then you should wait until your pass returns first, then the money, and finally the coupon. And just then a power failure occured. And yes, there you are in the middle of Hanoi at an ATM machine which just before swallowed one of the most valuable things you own on such a journey and does not intend to give it back.

And how long does such power failure last and will it return anything afterwards.

Getting help appears not to be a very good idea, because it means walking away from your debit card and your money that could possibly come out any time when the power is back on. But this can last for hours.

Fortunately, after 10 minutes the electricity returned and yes the debit card and the money and the receipt came out nicely. PFFFFFFTTT !!! 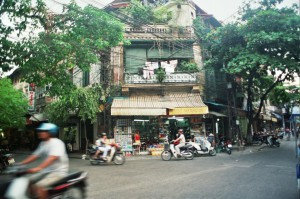 Spiderweb above the streets of Hanoi…

One of the nicest blackouts occurred in central Vietnam during a visit to the authentic fishing village of Hoi An.

On one of the wonderful evenings The Wandelgek visited a cozy fish restaurant on the banks of the river that flows through Hoi An. The atmosphere was cozy and there were all sorts of smal dishes ordered which were served throughout the evening. Suddenly power went down again. It got pitch black at the appealing restaurant and the kitchen had fallen out of service. But then almost like a well coordinated military operation, the waiters and chefs appeared carrying many little candlelights that were placed quickly on all of the tables. This really was a very quick reaction carried out with utmost precision. Apparently the staff was well prepared for power failures because they happened several times a week. Actually, it was even more cozy at the restaurant now. The power failure lasted about half an hour, after which all the equipment in the kitchen and the lights started working again. The candles were quickly removed from the tables and the next food was served 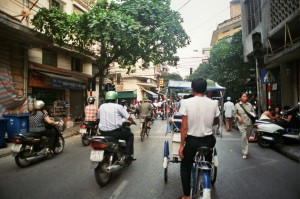 How many power cables do you count?

Conclusion: you might say that power outages in Asia and Africa do not have the same severe impact on society that they do have in the Netherlands, because there is less use of electricity and also because people are more creative, simply because of the frequency of their occurrence. Lets be honest. In the Netherlands, we are helpless whenever electricity is not available.