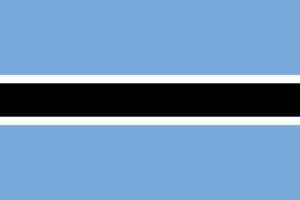 Botswana /bɒtˈswɑːnə/, officially the Republic of Botswana (Tswana: Lefatshe la Botswana), is a landlocked country located in Southern Africa. The citizens refer to themselves as Batswana (singular: Motswana). Formerly the British protectorate of Bechuanaland, Botswana adopted its new name after becoming independent within the Commonwealth on 30 September 1966. Since then, it has maintained a strong tradition of stable representative democracy, with a consistent record of uninterrupted democratic elections.

Botswana is topographically flat, with up to 70 percent of its territory being the Kalahari Desert. It is bordered by South Africa to the south and southeast, Namibia to the west and north, and Zimbabwe to the northeast. Its border with Zambia to the north near Kazungula is poorly defined but at most is a few hundred metres long.

A mid-sized country of just over 2 million people, Botswana is one of the most sparsely populated nations in the world. Around 10 percent of the population lives in the capital and largest city, Gaborone. Formerly one of the poorest countries in the world—with a GDP per capita of about US$70 per year in the late 1960s—Botswana has since transformed itself into one of the fastest-growing economies in the world, now boasting a GDP (purchasing power parity) per capita of about $18,825 per year as of 2015, which is one of the highest in Africa. Its high gross national income (by some estimates the fourth-largest in Africa) gives the country a modest standard of living and the highest Human Development Index of continental Sub-Saharan Africa.

Botswana is a member of the African Union, the Southern African Development Community, the Commonwealth of Nations, and the United Nations. Despite its political stability and relative socioeconomic prosperity, the country is among the hardest hit by the HIV/AIDS epidemic, with around a quarter of the population estimated to be infected.

In the 19th century, hostilities broke out between Tswana inhabitants of Botswana and Ndebele tribes who were making incursions into the territory from the north-east. Tensions also escalated with the Dutch Boer settlers from the Transvaal to the east. After appeals by the Batswana leaders Khama III, Bathoen and Sebele for assistance, the British Government put Bechuanaland under its protection on 31 March 1885.[12] The northern territory remained under direct administration as the Bechuanaland Protectorate and is modern-day Botswana, while the southern territory became part of the Cape Colony and is now part of the northwest province of South Africa. The majority of Setswana-speaking people today live in South Africa.

Bechuanaland Protectorate, Basutoland (now Lesotho) and Swaziland (the High Commission Territories) were not included, but provision was made for their later incorporation. However, their inhabitants began to be consulted by the UK, and although successive South African governments sought to have the territories transferred, the UK kept delaying; consequently, it never occurred. The election of the Nationalist government in 1948, which instituted apartheid, and South Africa’s withdrawal from the Commonwealth in 1961, ended any prospect of incorporation of the territories into South Africa. An expansion of British central authority and the evolution of tribal government resulted in the 1920 establishment of two advisory councils to represent both Africans and Europeans. Proclamations in 1934 regulated tribal rule and powers. A European-African advisory council was formed in 1951, and the 1961 constitution established a consultative legislative council.

In June 1964, the UK accepted proposals for a democratic self-government in Botswana. The seat of government was moved in 1965 from Mafikeng in South Africa, to the newly established Gaborone, which sits near its border. The 1965 constitution led to the first general elections and to independence on 30 September 1966. Seretse Khama, a leader in the independence movement and the legitimate claimant to the Ngwato chiefship, was elected as the first President, going on to be re-elected twice.

A long-running dispute over the northern border with Namibia’s Caprivi Strip was the subject of a ruling by the International Court of Justice in December 1999, which ruled that Kasikili Island belongs to Botswana.

The country is predominantly flat, tending toward gently rolling tableland. Botswana is dominated by the Kalahari Desert, which covers up to 70% of its land surface. The Okavango Delta, one of the world’s largest inland deltas, is in the northwest. The Makgadikgadi Pan, a large salt pan, lies in the north.

The Limpopo River Basin, the major landform of all of southern Africa, lies partly in Botswana, with the basins of its tributaries, the Notwane, Bonwapitse, Mahalapswe, Lotsane, Motloutse and the Shashe, located in the eastern part of the country. The Notwane provides water to the capital through the Gaborone Dam. The Chobe River lies to the north, providing a boundary between Botswana and Namibia’s Zambezi Region. The Chobe River meets with the Zambezi River at a place called Kazungula (meaning a small sausage tree, a point where Sebitwane and his Makololo tribe crossed the Zambezi into Zambia).

Botswana has diverse areas of wildlife habitat. In addition to the delta and desert areas, there are grasslands and savannas, where blue wildebeest, antelopes, and other mammals and birds are found. Northern Botswana has one of the few remaining large populations of the endangered African wild dog. Chobe National Park, found in the Chobe District, has the world’s largest concentration of African elephants. The park covers about 11,000 km2 (4,247 sq mi) and supports about 350 species of birds.

The Chobe National Park and Moremi Game Reserve (in the Okavango Delta) are major tourist destinations. Other reserves include the Central Kalahari Game Reserve located in the Kalahari desert in Ghanzi District; Makgadikgadi Pans National Park and Nxai Pan National Park are in Central District in the Makgadikgadi Pan. Mashatu Game Reserve is privately owned: located where the Shashe River and Limpopo River meet in eastern Botswana. The other privately owned reserve is Mokolodi Nature Reserve near Gaborone. There are also specialised sanctuaries like the Khama Rhino Sanctuary (for rhinoceros) and Makgadikgadi Sanctuary (for flamingos). They are both located in Central District.

Since raising livestock has proven to be profitable for the people of Botswana, the land continues to be exploited. The animal populations have continued to dramatically increase. From 1966 to 1991 the livestock population has increased from 1.7 million to 5.5 million. Similarly, the human population has increased from 574,000 in 1971 to 1.5 million in 1995, nearly a 200% increase. “Over 50% of all households in Botswana own cattle, which is currently the largest single source of rural income.” “Rangeland degradation or desertification is regarded as the reduction in land productivity as a result of overstocking and overgrazing or as a result of veld product gathering for commercial use. Degradation is exacerbated by the effects of drought and climate change.” Environmentalists report that the Okavango Delta is drying up due to the increased grazing of livestock. The Okavango Delta is one of the major semi-forested wetlands in Botswana and one of the largest inland deltas in the world; it is a crucial ecosystem to the survival of many animals.

The Department of Forestry and Range Resources has already begun to implement a project to reintroduce indigenous vegetation into communities in Kgalagadi South, Kweneng North and Boteti. Reintroduction of indigenous vegetation will help with the degradation of the land. The United States Government has also entered into an agreement with Botswana, giving them $7 million US dollars to reduce Botswana’s debt by $8.3 million US dollars. The stipulation of the US reducing Botswana’s debt is that Botswana will focus on more extensive conservation of the land.

The United Nations Development Programme claims that poverty is a major problem behind the overexploitation of resources, including land, in Botswana. To help change this the UNDP joined in with a project started in the southern community of Struizendam in Botswana. The purpose of the project is to draw from “indigenous knowledge and traditional land management systems”. The leaders of this movement are supposed to be the people in the community, to draw them in, in turn increasing their possibilities to earn an income and thus decreasing poverty. The UNDP also stated that the government has to effectively implement policies to allow people to manage their own local resources and are giving the government information to help with policy development.