The rest of my walk through the forest, I kept checking my map carefully. 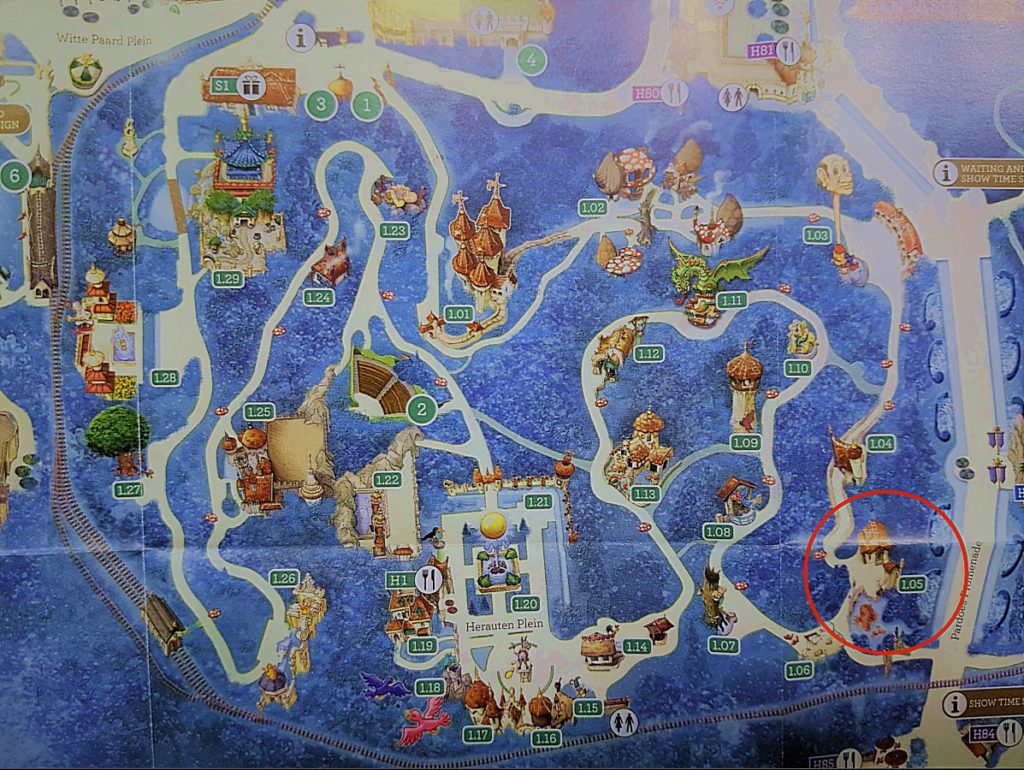 After a few hours of just trees and fern, I thought I saw a rooftop peaking throught the green world. Half an hour later I could clearly see the contours of a small house and 15 minutes later I walked into a small clearing looking at what seemed to be the house of a carpenter. A wooden sign announced I had reached La Bottega Gepetto. 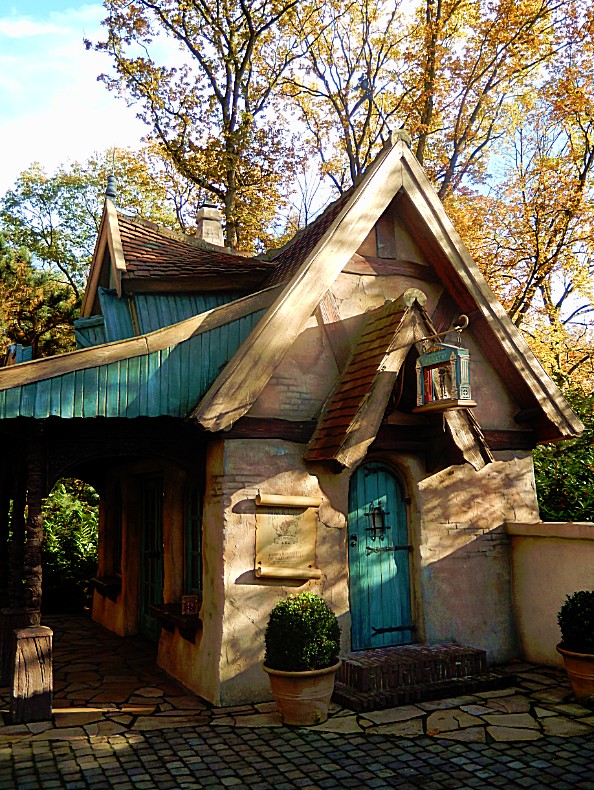 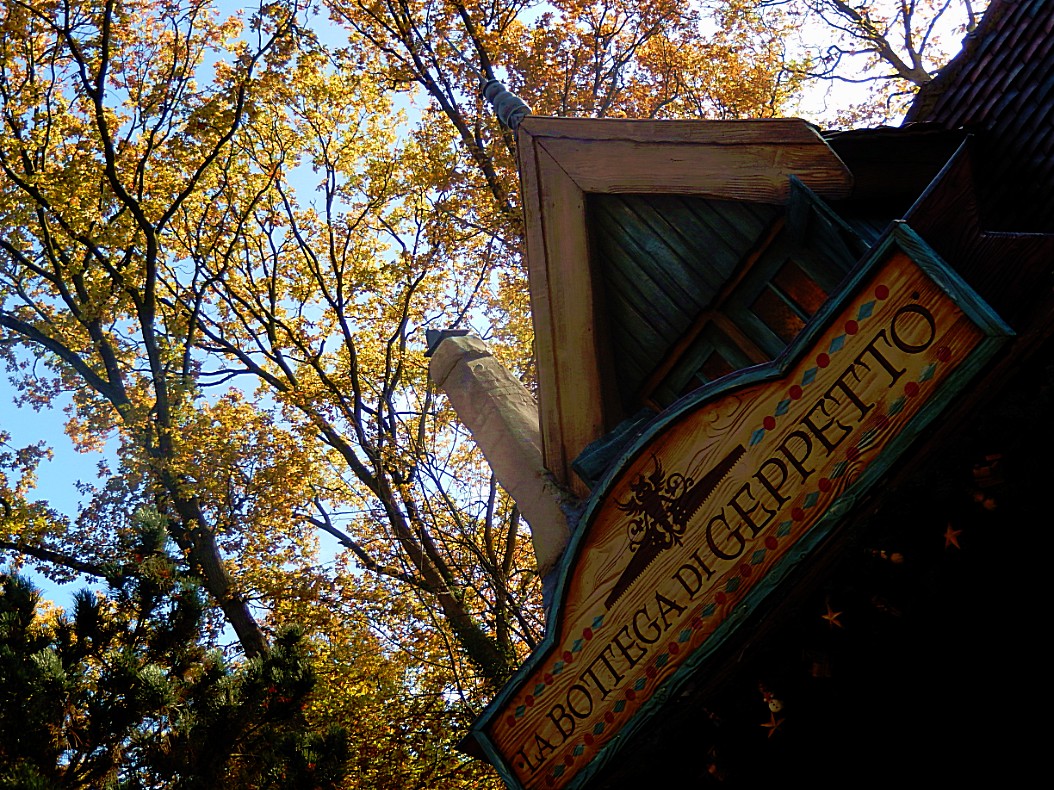 Seeing the wonderful decorations, the wooden house was clearly built by someone quite good in the art of woodcraft. I approached the door and knocked a few times, but after the hollow sound coming from the other side had echoot away, it stayed quiet. 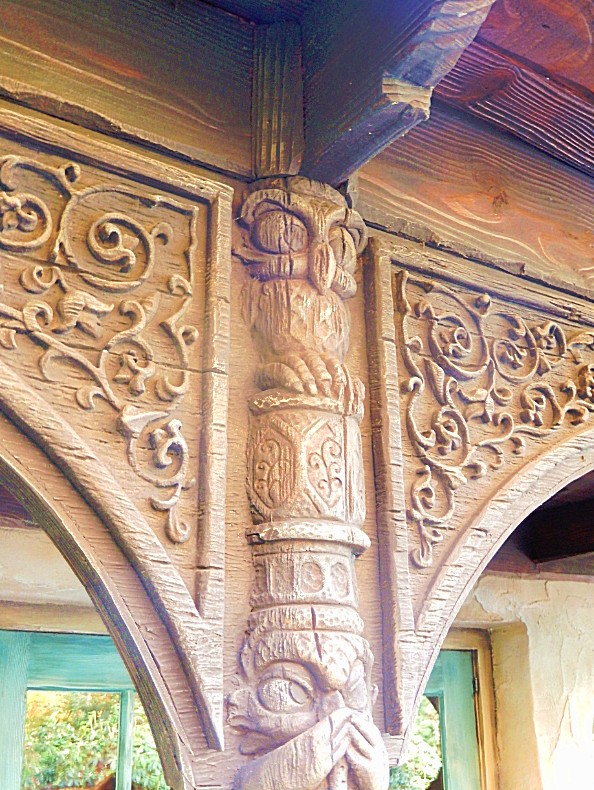 The house was clearly abandoned. 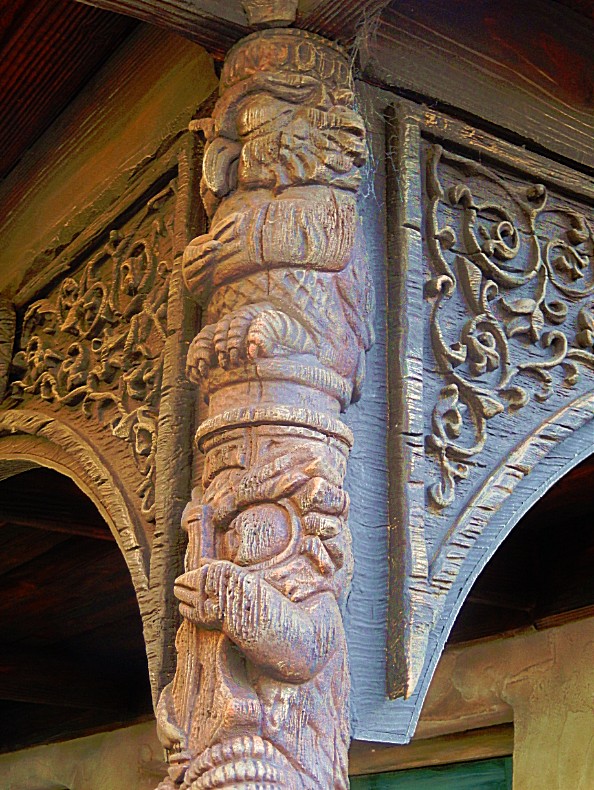 Just when I was starting to leave thinking of reaching maybe another house or village before it would get dark, I noticed a little decorated box in the windowsill. There was even a key in it but I could not get the key out of a lock. It just stuck in the wooden box and I could only turn the key. 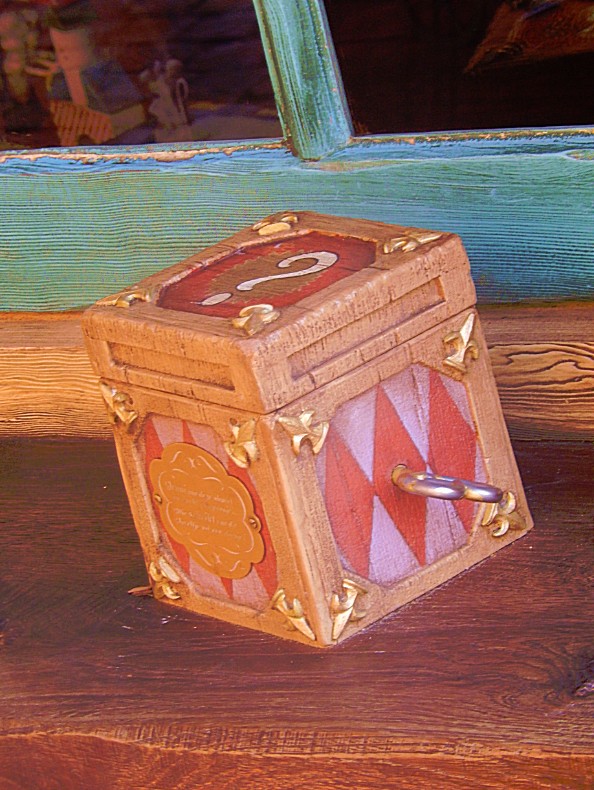 But the box didn’t open. I turned it again… and again and again and suddenly I understood I was winding the key. This was not simply a locked box but a music box. I kept turning the key until it wouldn’t go any further and I let go of it. Slowly it started to unwind in opposite direction. A tune started to play and very slowly the box opened…

Then I saw some small wooden figures of small children, dancing to a beautiful soft melody. The dancing was as delicate as the movements of Chinese Tai Chi. But as time passed, the melody was supported by a slow underbeat, which slowly but surely increased its pace. First the music was joyous and upbeat and the young dancers started to twirl around eachother and around their axes. Then the music sped up even more and it began to sound frantic and the dancers started yelling and heaved their arms up into the sky. “Beware, Beware”, they shouted at first agitated then feverishly as if they couldn’t stop dancing and then I noticed they all wore minute red shoes because some of them spinned so hard around their center that they lost the shoes and fell down, finally ending that horror dance, but the red shoes… the red shoes kept dancing!!! Then fiery sparks started to fly around and the wooden figures on the floor started to catch fire and were soon ablaze. I quickly put my hand on the lid of the box and hastily closed it… 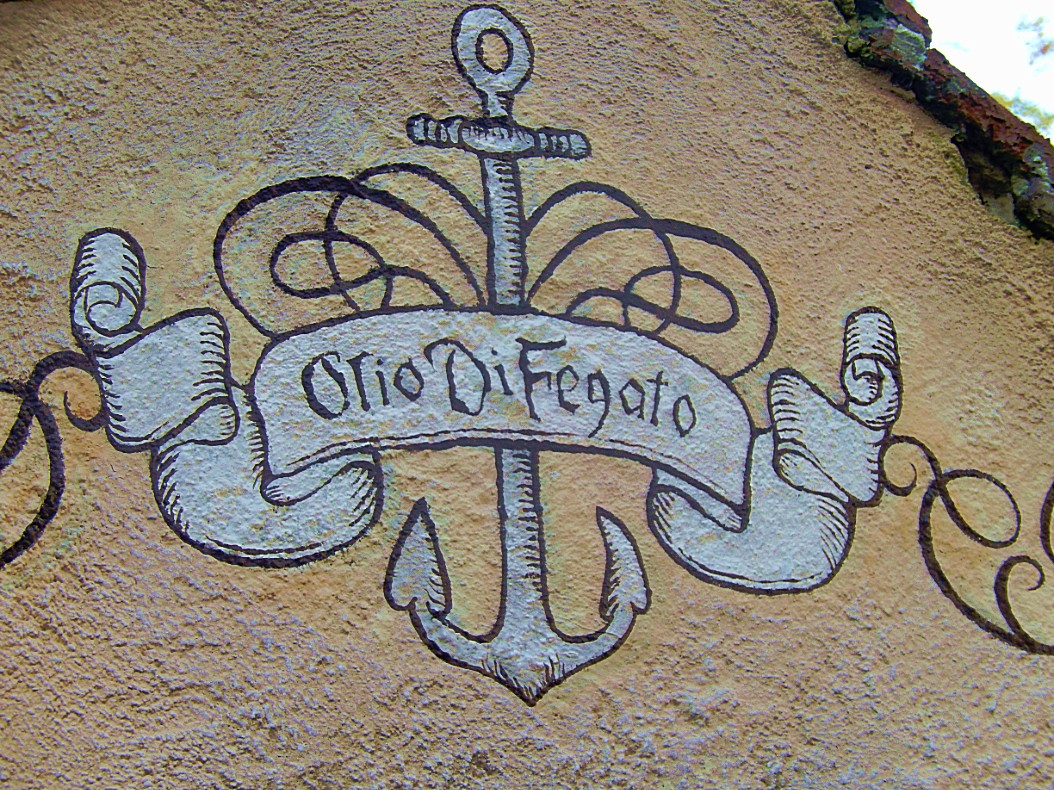 I had heard of a carpenter named Gepetto before, living in the woods in a small house together with his goldfish Cleo, a tiny cat named Figaro and a wooden doll named Pinocchio, of which tales said it really lived, and the tales about him were that of an old man, making wonderfull clocks and dolls and toys out of wood. Lots of children and their parents were visiting him. 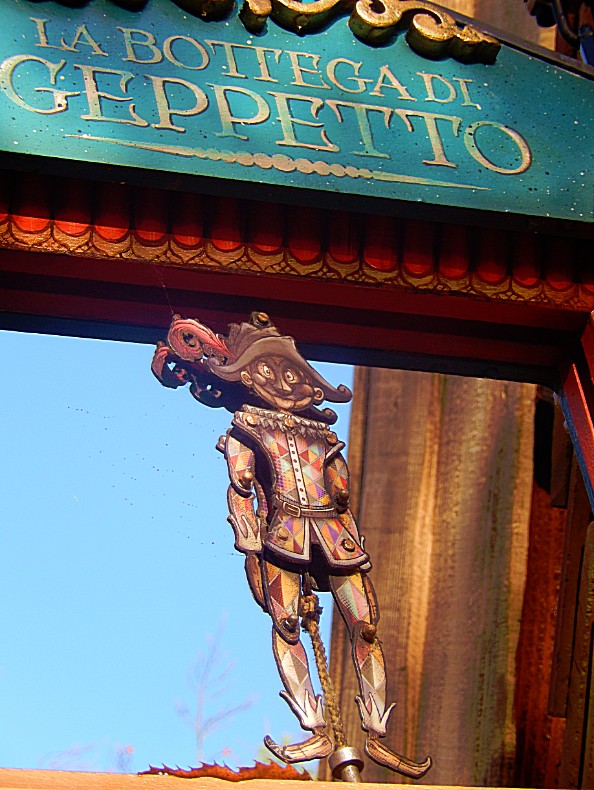 Was Gepetto really this nice old man building wooden toys and clocks? As I looked up, I saw this wooden pull puppet and where before I would have laughed and haven given it a pull, it now really frightened me and I unwittingly started to walk backwards towards a small lake… 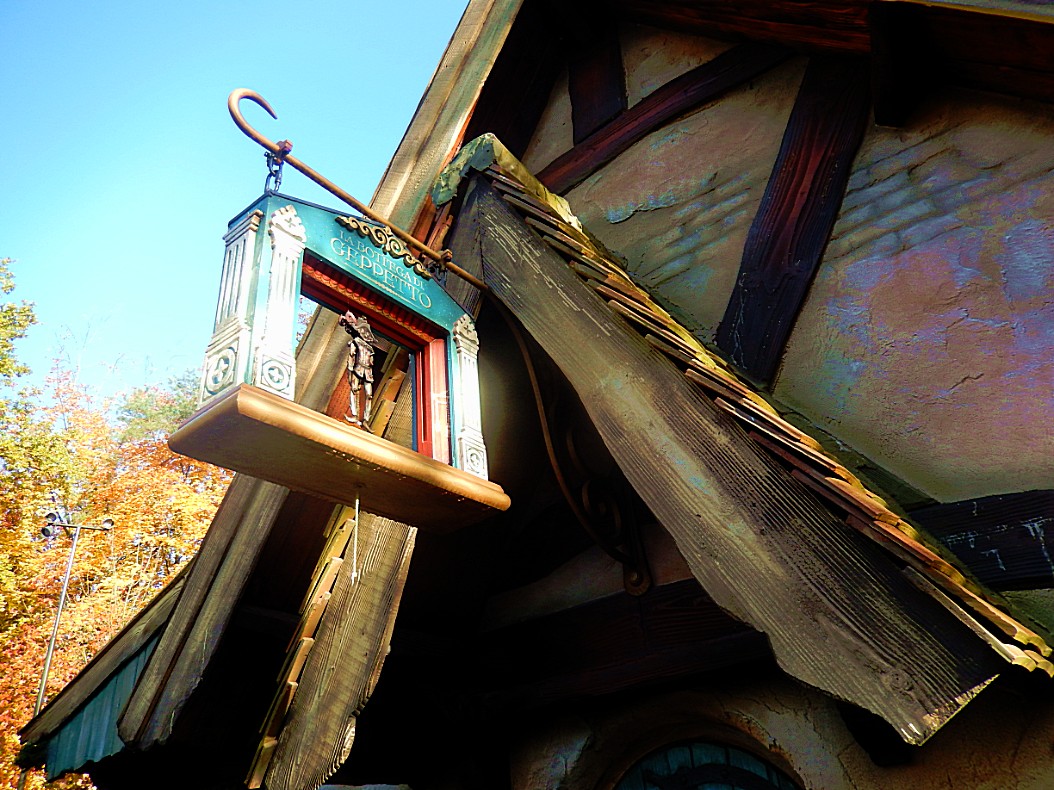 Suddenly the lid of a barrel opened and a sly fox showed his head above its rim, looking in every direction. I started to think it was looking for bunnies to eat… 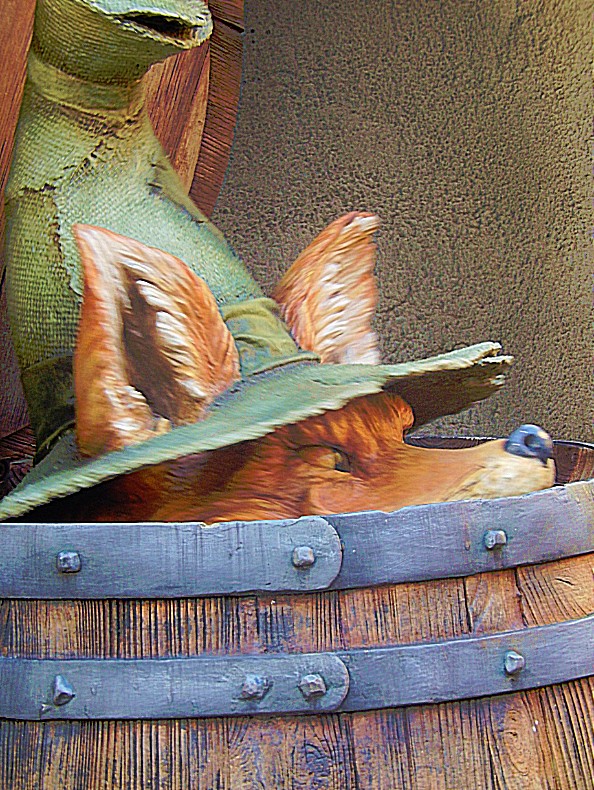 …but then I saw fear in its eyes and after a few moments it mumbled: “Are they gone?” I wanted to ask: “Who?”, but instead I said: “I don’t know!” Immediately the fox sank into the barrel closing the lid on top. 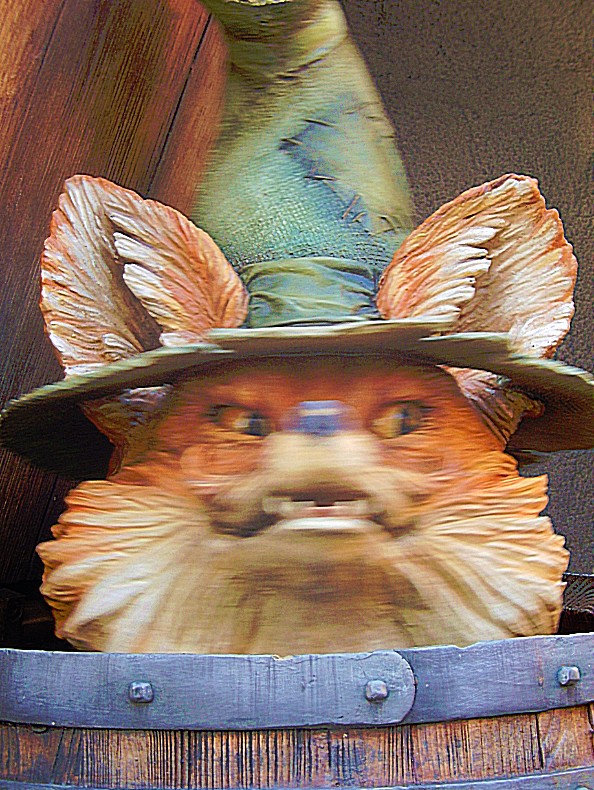 Mmmm I thought. Someone or something is making that dear fox very scared. Then I reached the mirrr like surface of the pond and just as I thought about turning around and walking around the pond towards a new adventure, the water started to stir. Then waves hit the shore and a fountain of water appeared in the center of the pond after which a large whale followed. 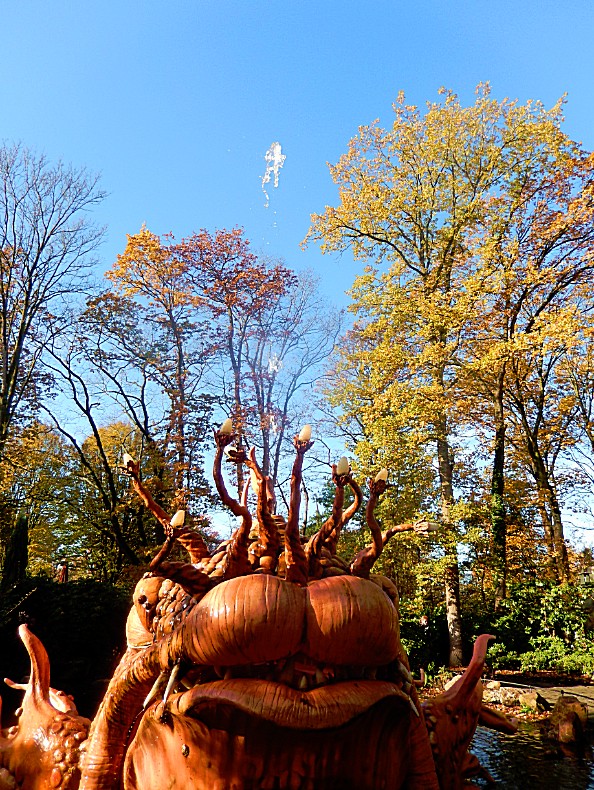 I didn’t like the way things were going. The whale started to swim towards me and looking at its mouth, I immediately knew it would be able to swallow me. But hey, it couldn’t reach me as long as I stayed on the shore. 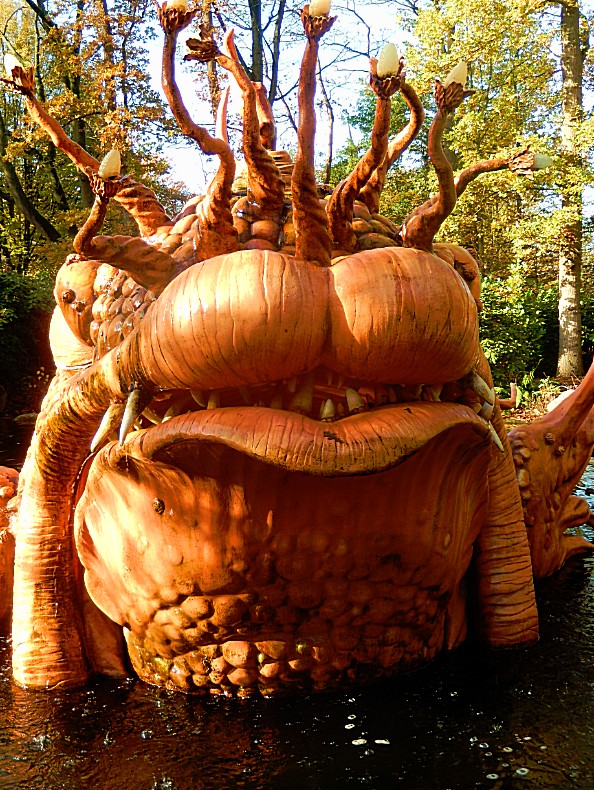 It clearly got frustrated with that and looked at me with mean, large penetrating eyes. Then it started to open its mouth… 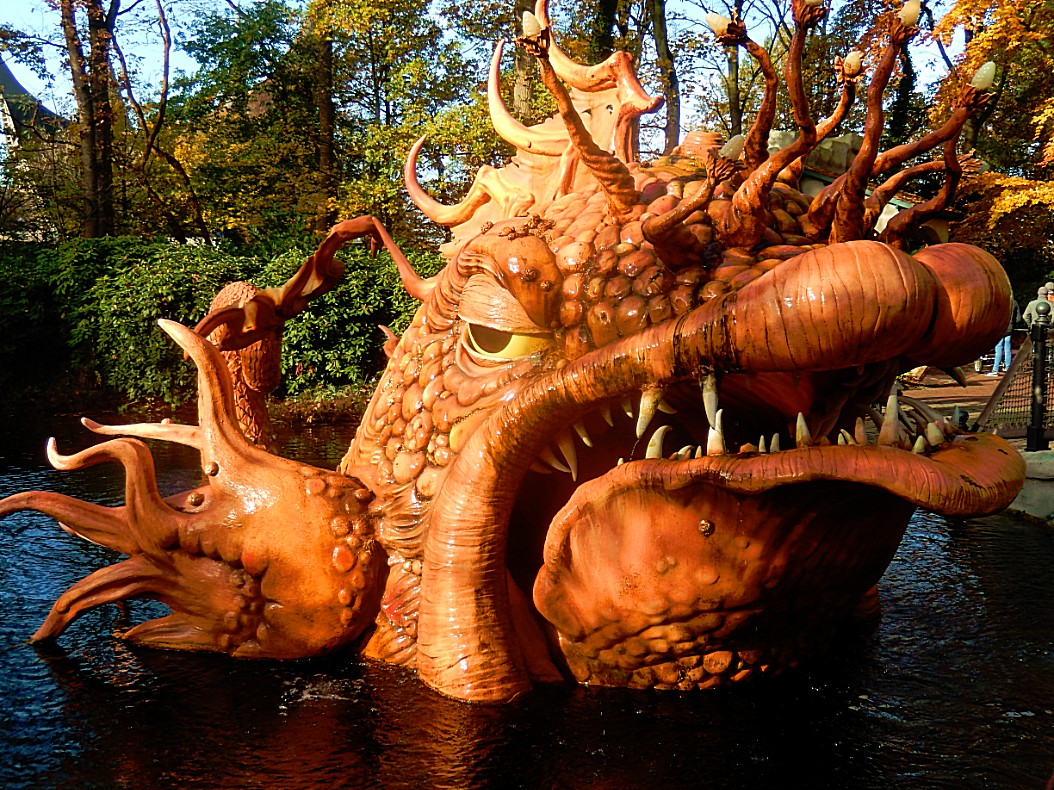 … it was not only a humongous mouth, it also showed its razor sharp teeth larger than the largest kitchen knife. 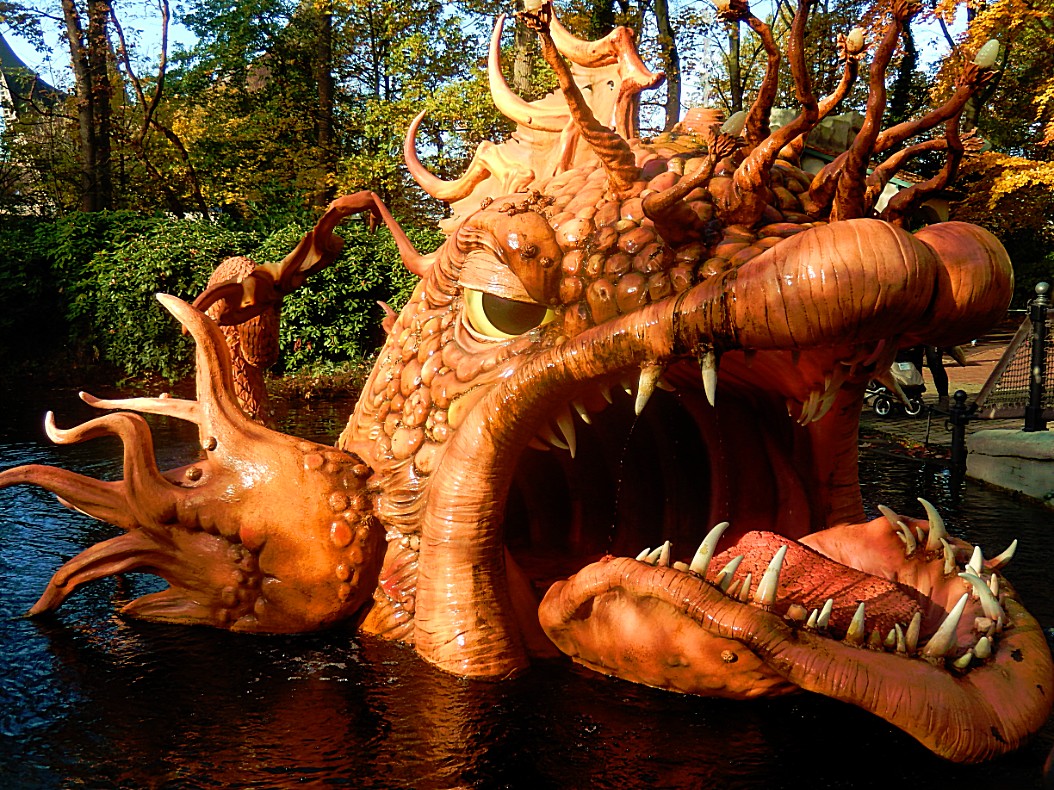 Then I heard the sound of a very heart warming, generous, a bit oaken voice and it was inviting me to come inside and play… 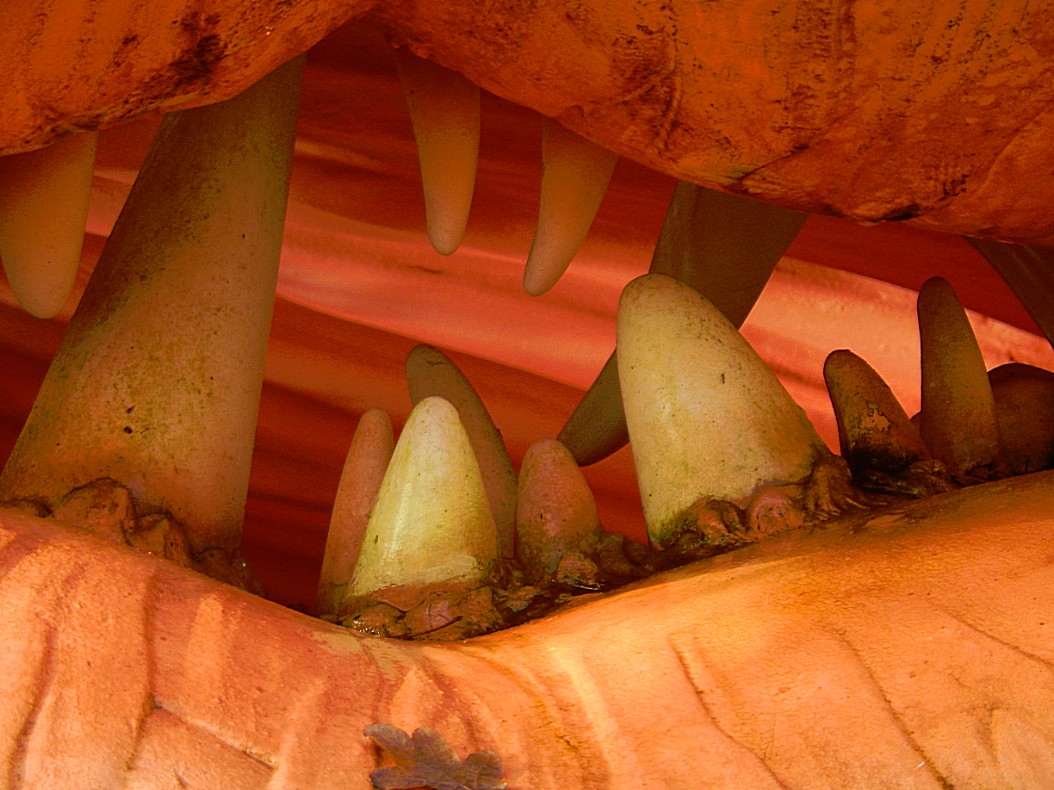 … as I looked through the teeth of the whale into its mouth, I saw a wooden doll, but it wasn’t attached to any string. It really moved on its own. It lived. It had big sad eyes and it smiled a bit at me and said: Please come and play with me, I’m so lonely and it has been so long since I played with other children. Please come in and play with me. 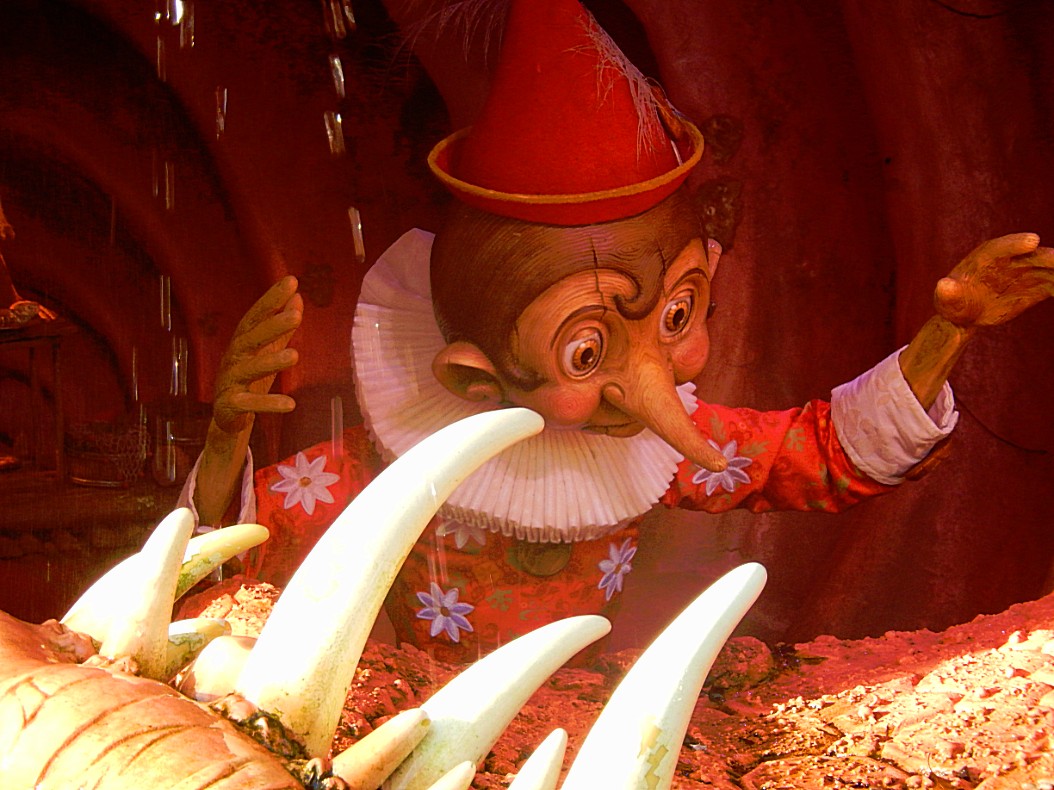 I was forgetting the whale and was tempted to walk towards that sad young wooden puppet, but something kept me from walking forward… 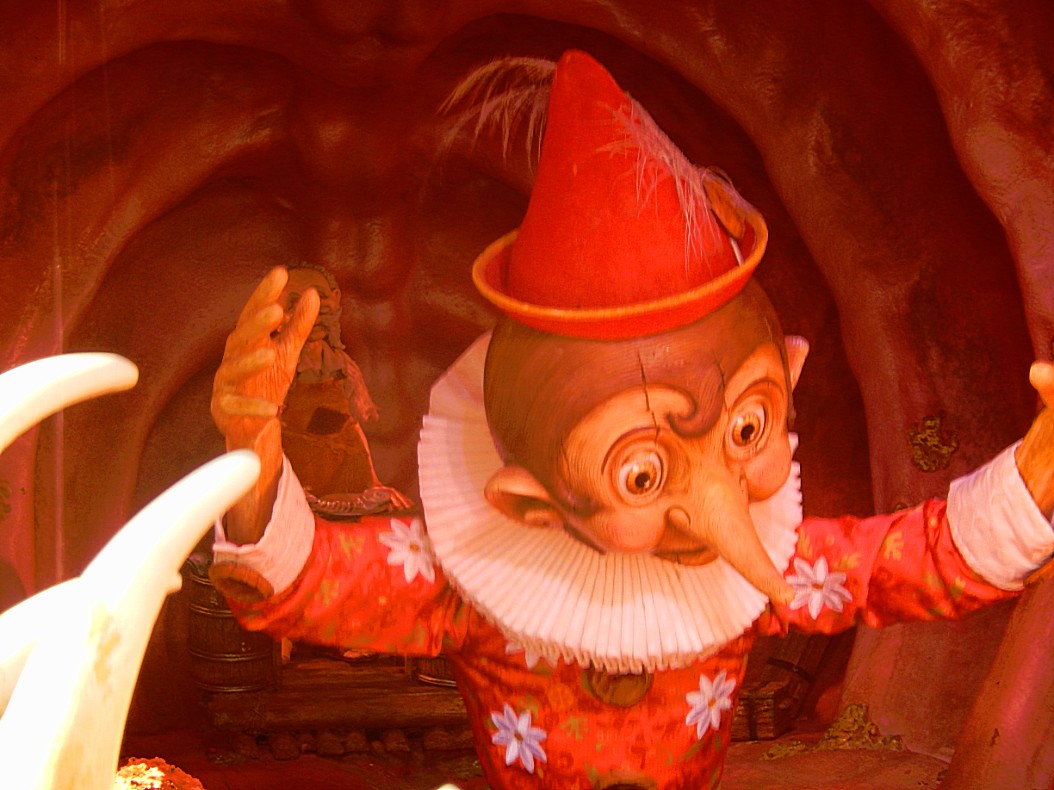 Then an old cackling voice intervened and spoke to me from even deeper into the whale’s mouth. “Don’t be so impatient Pinocchio, our guest is hungry, can’t you see that. Come and have dinner with us. We have delicious baked fish on the menu and barrels of Italian red wine and English dark ale to enamour your taste buds…” 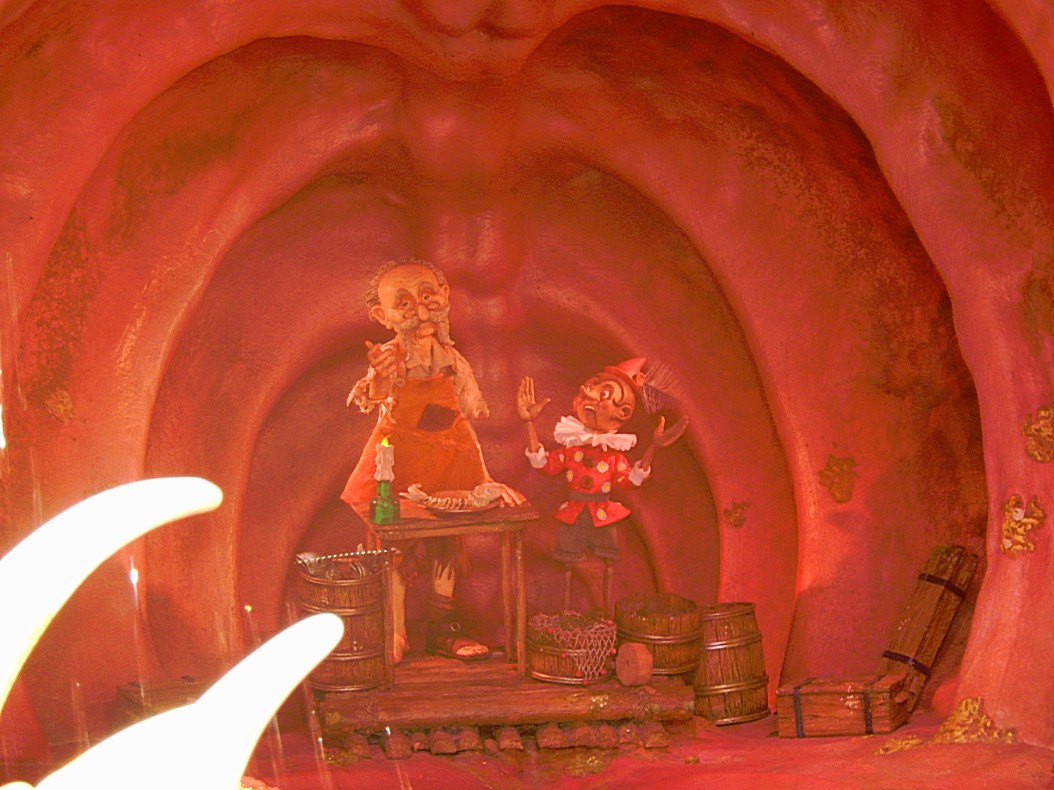 I was quite hungry and for a moment I began to move forward, but then I saw those huge teeth in the corner of my eye and Gepetto (cause that was who that old man really was), seemed to lick his lips and his eyes flickered and a drop of glistening sweat rolled over his forehead. Suddenly I didn’t trust the situation any more and I remembered the horrific music box made by this Gepetto and I remembered the fear of the fox and … I stopped. Pinocchio who had been quiet for a while, suddenly squeeked: “Daddy the food isn’t obeying you!”. SSSSSSSSSHHHHTTTTT hissed Gepetto as he pushed Pinocchio aside. Pinocchio fell and his wooden pointy hat, pierced into the soft red flesh of the whale. The whale stirred and moved its enormous tongue and Gepetto and Pinocchio had to really concentrate to keep balance. “Hush Cleo”, yelled Gepetto. “Be a good fish and let us do our job.”… 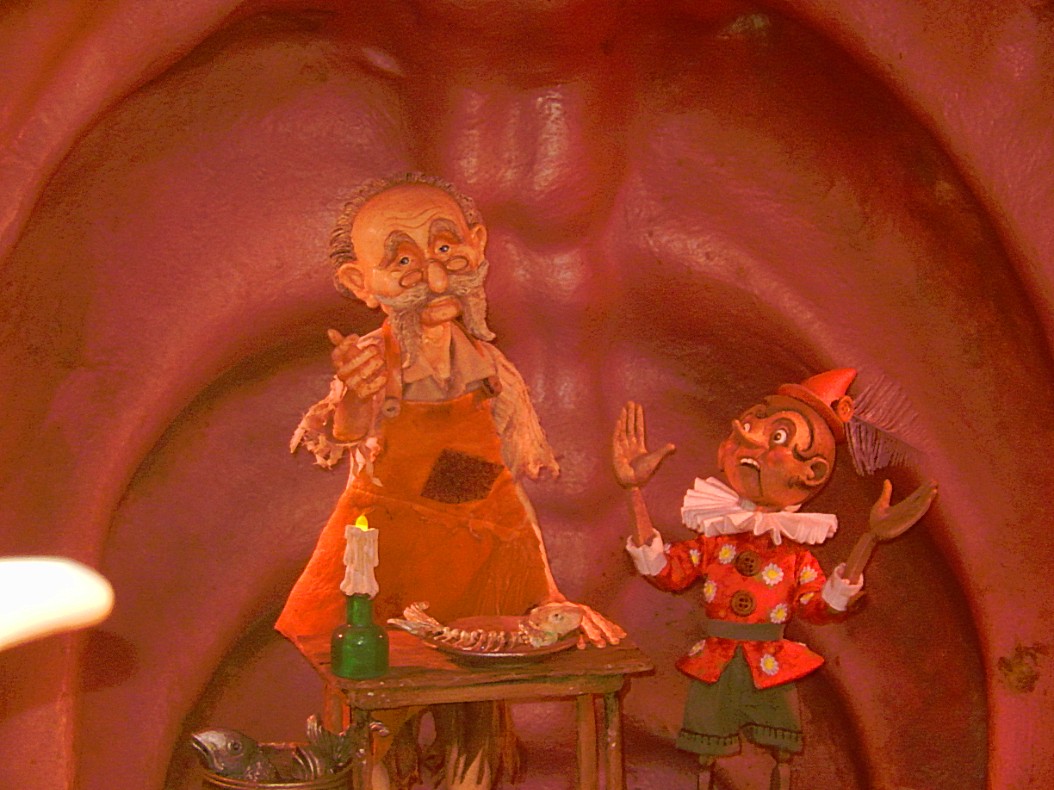 … and then it struck me! This was little Cleo?!?! Cleo the goldfish??? Then Cleo must have had a humongous appetite to grow as large as this! And Gepetto and his develish wooden child Pinocchio, were luring children or better food into Cleo’s never satisfied stomach! I hastily stepped back a few paces and heard Gepetto utter the words: “Blast it!” before the whale, Cleo, shut its mouth and disappeared again underneath the ponds surface.

I walked further backwards away from the pond as another barrel opened and now a cats face appeared and it wasn’t looking for mice either. It looked around frightened of something and it asked: “Are they gone?”. This time I didn’t have to ask “Who?”, but I could truly say they were gone…for now…  The cat which had an eyelid on its left eye, left the barrel to meet me, still looking scared in all directons. I introduced itself as Figaro. That figures Figaro, I thought and started a conversation. 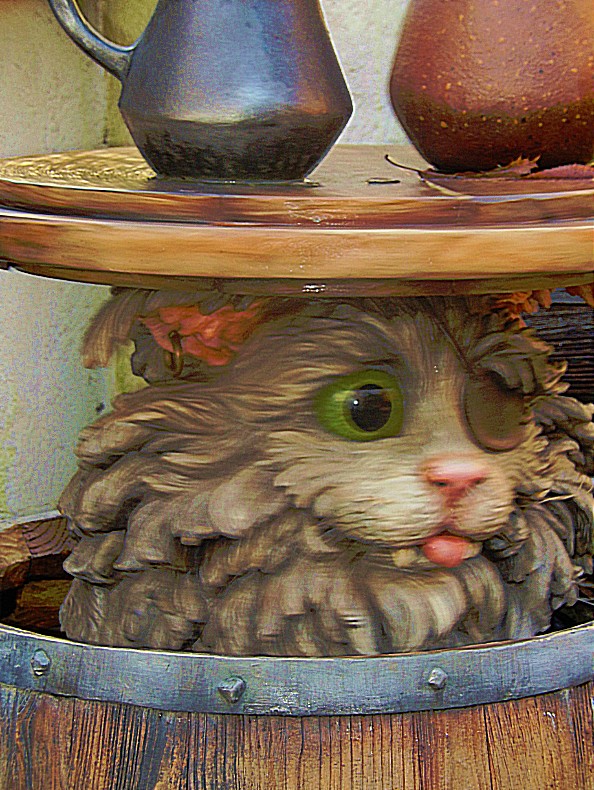 Figaro started to tell me about his past as a tiny young cat in the house of that mean old Gepetto who was only interested in the wellfare of his goldfish Cleo and in making toys to lure children to his house. Some of those children which came allone, without their parents, disappeared forever and Figaro saw why. They were fed, at first in tiny pieces, but later as she grew bigger in larger chunks and eventually completely, to Cleo.

Long ago when Figaro had just found out about this and Cleo was still a wee littele goldfish in a bowl of water, he had tried to catch and eat Cleo, to stop this macabre creature. But he was too small and the bowl had toppled on the floor making a lot of noise. Gepetto quickly saved Cleo from drowning in air and Pinocchio, that mean devilish puppet (which was Gepettos masterpiece) had laughed at Figaro as he had stung his wooden finger into his left eye.

From that moment, Figaro had never gotten any chance to eat Cleo and when Cleo outgrew him, he had to take care to not be eaten instead.

Then Figaro invited me into Gepetto’s empty house and he made me a meal and poured an ale. Later after dark, the fox left his barrel too and visited the cabin and we had a great time telling stories about Gepetto, Pinocchio and Monstro (which was how Cleo was known now) and about the red shoes which gepetto had created and which he gave as a gift to little children, mostly orphans or marooned children. After putting on these shoes they couldn’t stop dancing and after they got tired they couldn’t influence direction and so they danced of into Cleo’s wide opned mouth, to dissapear forever.

After this last story we all wondered how it was possible that those tales of the nice old toymaker Gepetto and, the wooden doll that became a real boy after defeating Monstro had so persistently, but also so unjustified gotten root into our common memory.