Travelling over the Indonesian island of Java in 2003, The wandelgek learned about the three main forms of Wayang:

There are more forms of wayang like Wayang gedog/wayang topeng, Wayang karucil or Wayang klitik and Wayang beber. 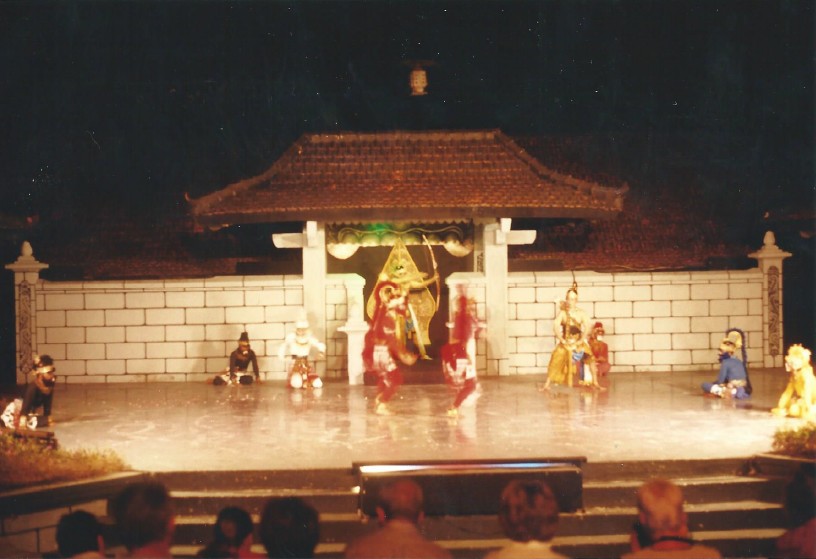 Wayang wong, also known as Wayang orang (literally “human wayang”), is a type of Javanese theatrical performance wherein human characters imitate movements of a puppet show. The show also integrates dance by the human characters into the dramatic performance. It typically shows episodes of the Ramayana or the Mahabharata. 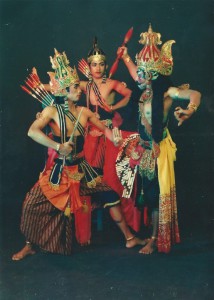 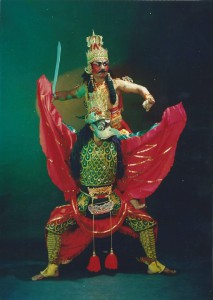 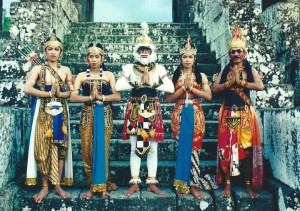 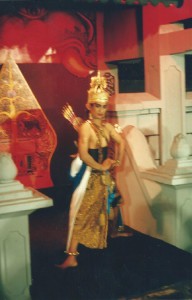 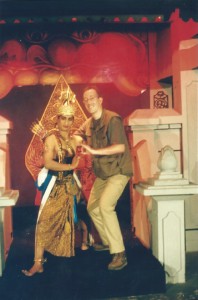 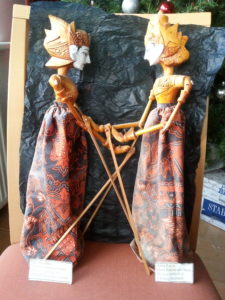 Wayang golek are three-dimensional wooden rod puppets that are operated from below a wooden rod that runs through the body to the head, and by sticks connected to the hands. The construction of the puppets contributes to their versatility, expressiveness and aptitude for imitating human dance. Today, wayang golek is mainly associated with Sundanese culture of West Java. In Central Java, the wooden wayang also known as Wayang Menak, which originated from Kudus, Central Java.

Little is known for certain about the history of wayang golek, but scholars have speculated that it most likely originated in China and arrived in Java sometime in the 17th century. Some of the oldest traditions of wayang golek are from the north coast of Java in what is called the pasisir region. This is home to some of the oldest Muslim kingdoms in Java and it is likely the wayang golek grew in popularity through telling the wayang menak stories of Amir Hamza, the uncle of Muhammad. These stories are still widely performed in Kabumen, Tegal, and Jepara as wayang golek menak, and in Cirebon, wayang golek cepak. Legendary origins of wayang golek attribute their invention to the Muslim saint Wali Sunan Kudus, who used the medium to proselytize Muslim values. 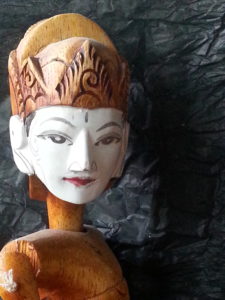 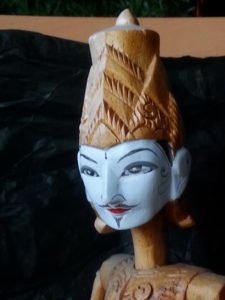 In the 18th century the tradition moved into the mountainous region of Priangan West Java where it eventually was used to tell stories of the Ramayana and the Mahabarata in a tradition now called Wayang Golek Purwa, which can be found in Bandung, Bogor and Jakarta. The adoption of Javanese Mataram kejawen culture by Sundanese aristocrats was probably the remnant of Mataram influence over the Priangan region during the reign of expansive Sultan Agung. While main characters from Ramayana and Mahabharata are similar with wayang kulit purwa version of Central Java, some of punakawan (servant also jester) were rendered in Sundanese names and characteristics, such as Cepot or Astrajingga as Bagong, Dawala or Udel as Petruk. Wayang golek purwa has become the most popular form of wayang golek today and the most famous puppeteer family is the Sunarya family which has produced several generations of stellar performers.

The Wandelgek bought these Wayang golek puppets in Bandung in a little shop of a school for orphans. 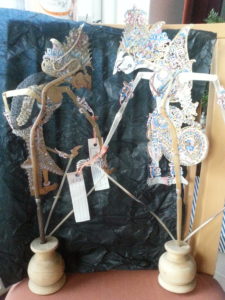 Wayang kulit, or shadow puppets, are without a doubt the best known of the Indonesian wayang. Kulit means skin, and refers to the leather construction of the puppets that are carefully chiselled with very fine tools, supported with carefully shaped buffalo horn handles and control rods, and painted in beautiful hues, including gold. The stories are usually drawn from the Hindu epics the Ramayana and the Mahabharata.

There is a family of characters in Javanese wayang called Punakawan; they are sometimes referred to as “clown-servants” because they normally are associated with the story’s hero, and provide humorous and philosophical interludes. Semar is actually the god of love, who has consented to live on earth to help humans. He has three sons: Gareng (oldest ), Petruk, and Bagong (youngest son). These characters did not originate in the Hindu epics, but were added later. They provide something akin to a political cabaret, dealing with gossip and contemporary affairs. 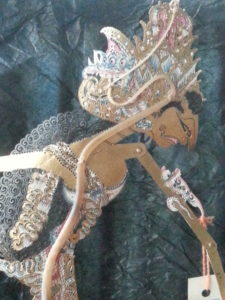 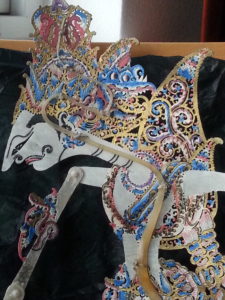 The puppet figures themselves vary from place to place. In Central Java the city of Surakarta (Solo) and city of Yogyakarta have the most well-know wayang traditions, and the most commonly imitated style of puppets. Regional styles of shadow puppets can also be found in Temanggung, West Java, Banyumas, Cirebon, Semarang, and East Java. Bali wayang are more compact and naturalistic figures, and Lombok has figures representing real people. Often modern-world objects as bicycles, automobiles, airplanes and ships will be added for comic effect, but for the most part the traditional puppet designs have changed little in the last 300 years. 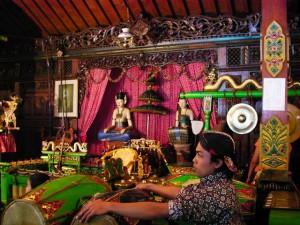 Historically, the performance consisted of shadows cast by an oil lamp onto a cotton screen. Today, the source of light used in wayang performance in Java is most often a halogen electric light, while Bali still uses the traditional firelight. Some modern forms of wayang such as Wayang Sandosa (from BahaSA iNDOneSiA, since it uses the national language of Indonesian instead of Javanese) created in the Art Academy at Surakarta (STSI) employs theatrical spotlights, colored lights, contemporary music, and other innovations. 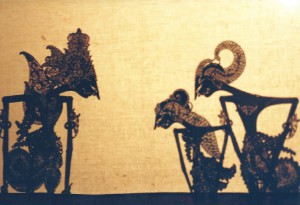 Making a wayang kulit figure that is suitable for a performance involves hand work that takes several weeks, with the artists working together in groups. They start from master models (typically on paper) which are traced out onto skin or parchment, providing the figures with an outline and with indications of any holes that will need to be cut (such as for the mouth or eyes). The figures are then smoothed, usually with a glass bottle, and primed. The structure is inspected and eventually the details are worked through. A further smoothing follows before individual painting, which is undertaken by yet another craftsman. Finally, the movable parts (upper arms, lower arms with hands and the associated sticks for manipulation) mounted on the body, which has a central staff by which it is held. A crew makes up to ten figures at a time, typically completing that number over the course of a week. However, unfortunately there is not strong continuing demand for the top skills of wayang craftspersons and the relatively few experts still skilled at the art sometimes find it difficult to earn a satisfactory income. 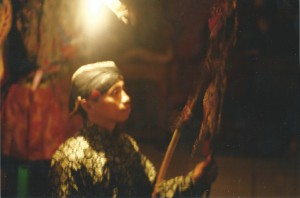 The painting of less expensive puppets is handled expediently with a spray technique, using templates, and with a different person handling each color. Less expensive puppets, often sold to children during performances, are sometimes made on cardboard instead of leather.

The Wandelgek bought these Wayang Kulit puppets at the shop of a little theatre in Yogyakarta where he witnessed a small demonstration of Wayang Kulit. 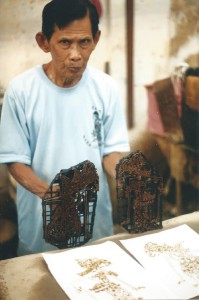 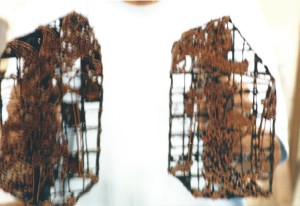 Wayang beber relies on scroll-painted presentations of the stories being told. Wayang beber has strong similarities to narratives in the form of illustrated ballads that were common at annual fairs in medieval and early modern Europe. They have also been subject to the same fate—they have nearly vanished although there are still some groups of artists who support wayang beber in places such as Surakarta (Solo) in Central Java. 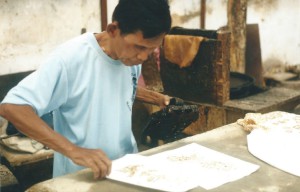 Chinese visitors to Java during the 15th century described a storyteller or unrolled scrolls and told stories that made the audience laugh or cry. A few scrolls of images remain from those times, found today in museums. There are two sets, hand-painted on hand-made bark cloth, that are still owned by families who have inherited them from many generations ago, in Pacitan and Wonogiri, both villages in Central Java. Performances, mostly in small open-sided pavilions or auditoriums, take place according to the following pattern:

The dalang gives a sign, the small gamelan orchestra with drummer and a few knobbed gongs and a musician with a rebab (violin-like instrument held vertically) begins to play and the dalang unrolls the first scroll of the story. Then, speaking and singing, he narrates the episode in more detail. In this manner, in the course of the evening he unrolls several scrolls one at a time. Each scene in the scrolls represents a story or part of a story. The content of the story typically stems from the Panji romances which are semi-historical legends set in the 12th-13th century East Javanese kingdoms of Jenggala, Daha and Kediri, and also in Bali.

The Wandelgek did get some free prints of Wayang Beber figurines on paper in a Batik shop in Yogyakarta.