The wandelgek visited Turkmenistan’s capital of ashgabat in 2004, while travelling the famous Silkroad. The city was struck by a mayor earthquake levelling and demolishing lots of its old buildings. The great leader of Turmenistan named Turkmenbashi (Father of the Turkmen) then decided to rebuilt it in full splendour as a white marble palace city, with lots of fountains and this was to attract tourism too, cause some of the buildings are large hotels that nowadays are largely empty, as are the many traffic lanes on the broad streets and avenues that cross in between these palaces…

There is also a city park dedicated to the book that every Turkmen family has to own: The Ruhnama. A golden placque remembers the foundation of the park, but due to insufficient knowledge of the English language the word “completed” is spelled erroneously. 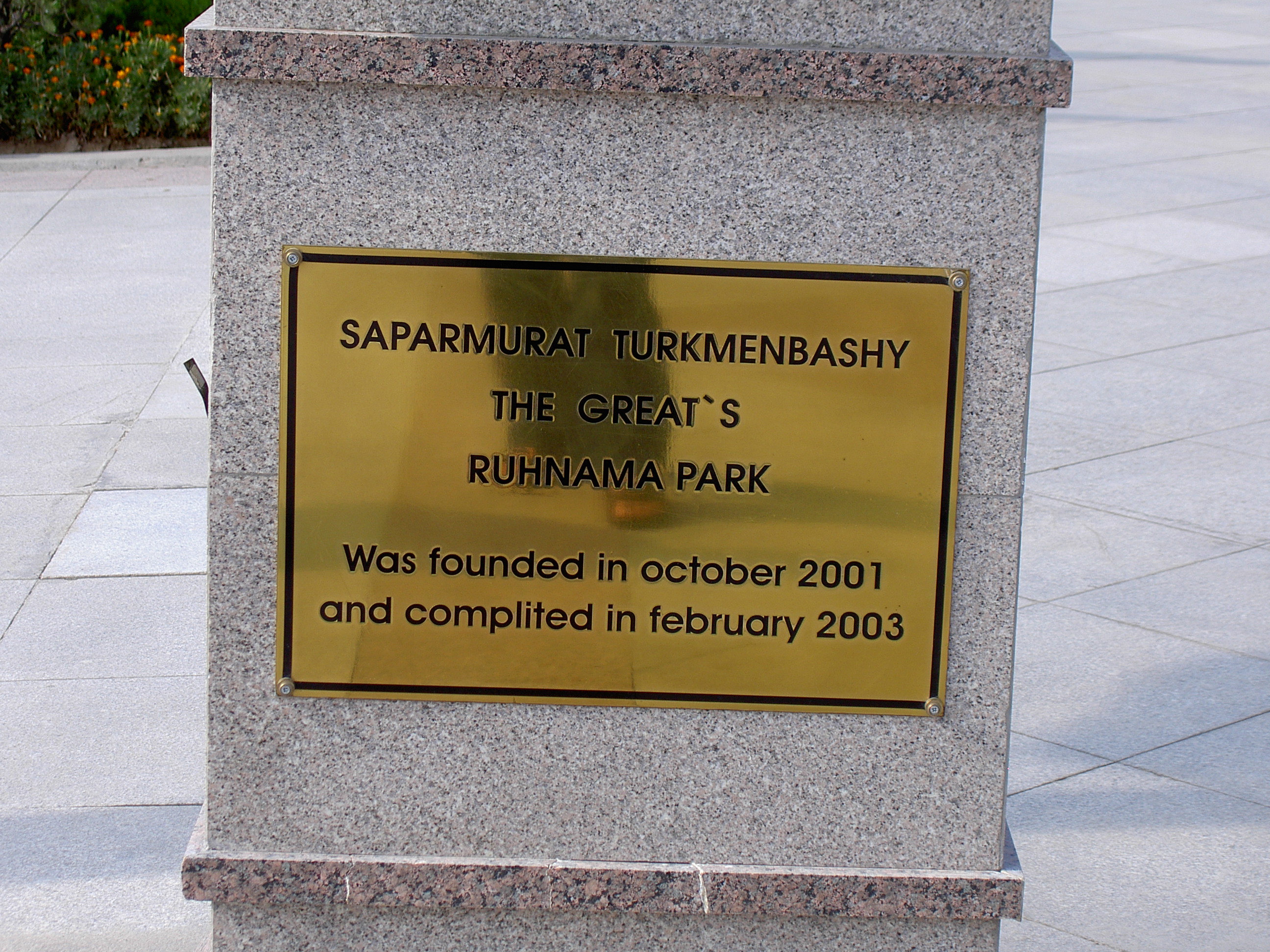 Yes, you did read those previous sentences well. A public park dedicated to a book!!! Heaven for anyone like me who’s background is that of a librarian 😉

That must be quite some book then?

The Ruhnama (The Book of the Soul) is a book written by Saparmurat Niyazov, the President of Turkmenistan from 1990 to 2006, combining spiritual/moral guidance, autobiography and revisionist history; much of it is of dubious or disputed factuality and accuracy. The text includes many stories and poems, including those by Sufi poet Magtymguly Pyragy. It was intended as the “spiritual guidance of the nation” and the basis of the nation’s arts and literature, by creating a positive image of the Turkmen people, a heroic interpretation of its history, the review of Turkmen customs and the definition of “moral, family, social and religious norms for modern Turkmens”. This would be accomplished by the book being the “centre” of the Turkmen universe.

When The Wandelgek visited Ashgabat in 2004, the book was not available but his city guide was friendly enough to send a copy ? 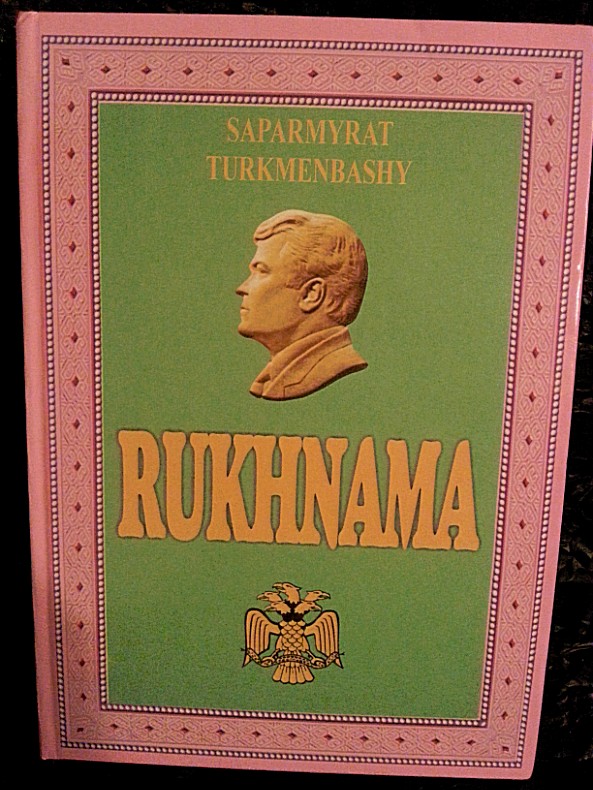 The Ruhnama was introduced to Turkmen culture in a gradual but eventually pervasive way. Niyazov first placed copies in the nation’s schools and libraries but eventually went as far as to make an exam on its teachings an element of the driving test. It was mandatory to read Ruhnama in schools, universities and governmental organisations. New governmental employees were tested on the book at job interviews.

In March 2006, Niyazov was recorded as saying that he had interceded with God to ensure that any student who read the book three times would automatically get into heaven. After the death of Niyazov in December 2006, its popularity remained high. In December 2009, President Gurbanguly Berdymukhammedov still strongly recommended that the government use the Ruhnama as an instrument of youth education.

Niyazov issued the work’s first volume in 2001, saying it would “eliminate all shortcomings, to raise the spirit of the Turkmens”. In 2004, Niyazov issued a second volume, covering morals, philosophy and life conduct. The book was a substantial part of Niyazov’s personality cult and his administration’s policy of Turkmenization. The government required bookstores and government offices to display it prominently—and mosques to keep it as prominent as the Qur’an. After some imams refused to comply with this demand, alleging that compliance would be blasphemous, the state reportedly demolished some mosques.

In May 2004, the government-controlled website Turkmenistan: The Golden Age released a statement announcing the phasing out of “several educational and scientific directions and subjects of minor importance”. The teaching of algebra, physics and physical education effectively ended in Turkmenistan. In place, students were encouraged to memorize the Ruhnama and chant slogans praising President Niyazov. A 30-year-old engineer reported that “all [his son] learns is passages from the Ruhnama, and he has started telling me off because he has memorised more of the book than me”.

In August 2005, the first part of the Ruhnama was launched into orbit so that it could “conquer space” as well. It is supposed to orbit Earth for the next 150 years.

In 2011, several years after Niyazov’s death, the Ruhnama was removed as a mandatory subject in Turkmen schools. However, it was noted that books written by Berdymukhamedov, Niyazov’s successor, had begun to be included in coursework. There were concerns that the cult around Niyazov would simply be replaced by another cult around Berdymukhamedov.

The Ruhnama‘s role in society

Knowledge of the Ruhnama is compulsory, imposed on religious communities and society generally. The work is the main component of education from primary school to university. Knowledge of the text (up to the ability to recite passages from it exactly) is required for passing education exams, holding any state employment and to qualify for a driving license. Official ceremonies have featured hundreds of singing Turkmens holding and performing choreography with the book.

In 2002 it was reported that “[w]hatever people might think of the book in private, public criticism of the work would be unthinkable.” Public criticism of or even insufficient reverence to the text was seen as the equivalent to showing disrespect to the President himself, and harshly punished by dispossession, imprisonment or torture of the offender or the offender’s whole family if the violation were grave enough. Since Niyazov’s death, punishment for disrespect of the book is in a questionable status.

There is an enormous mechanical statue of the book in Ashgabat, the country’s capital. Each evening at 8:00 pm, the cover opens and a recording of a passage from the book is played with accompanying video.

Months after President Niyazov’s death in December 2006, the Ruhnama’s grip on the Turkmen public appeared undiminished, the AP’s Benjamin Harvey reported in May 2007. Television stations featured solemn readings from the book. “The Ruhnama is a holy book” was carved into one side of the entrance arches at Central Asia’s largest mosque in Niyazov’s hometown—and “The Qur’an is Allah’s book” was carved into the other, wrote Harvey, adding: ‘Posters of the Ruhnama flank the roads of the capital city, Ashgabat, alongside likenesses of Niyazov. Quotations from it are inscribed on the desert city’s fantastic array of fountains, monuments and official buildings.’

Michael Denison, of the United Kingdom’s University of Leeds, told the UN Office for the Co-ordination of Humanitarian Affairs’ IRIN News: “I don’t think [the Ruhnama] will be disavowed […] It might just [become] rather perfunctory.” Others hope for restoration of full secondary and tertiary education and changes to the curriculum, which were cut back and reformed under Niyazov to be based primarily on the Ruhnama.

Questions remain about whether Niyazov actually wrote the Ruhnama himself; an anonymous scholar quoted in The New Yorker claimed that Niyazov was “somewhat illiterate”. The book has been translated into 41 languages.

In our world there are still a few countries ruled by dictatorship left. Some justify their oppressive regimes by claiming superiority over their subjects (mostly illiterate an/or badly educated and poor people. They sustain this feling of superiority by claims like knowing everything better, doing great or even better superhuman deeds or finding a common internal or external enemy/threat. Some regimes project all of these qualities on a single person. Examples of such regimes are or were North Korea, Syria, and Turkmenistan. You recognize this when there are an uncommmon amount of large portraits, statues but also television programs and exhibitions dedicated to this person. This is exactly what could be seen in Syria (specially under the regime of Hafiz Al-Assad), North Korea and Turkmenistan (but also more or less under regimes in Russia (Lenin, Stalin), Iran (Ayatollah Khomeini), China (Mao) and Lybia (Colonel Ghadaffi). People are oppressed by the regime using a strong Spcret Police force which is always rooted deeply in society (Your next door neighbour coud be secret police or a spy, but so could your son or wife or brother). Fear is an important weapon for the rgime to keep power. In some regimes there’s also the cult of the all seeing leader writing a book which provides guidelines for everything. In Lybia Ghadaffi had his famous green book, in China Mao had the red book and in Turkmenistan the leader wrote the Ruhnama…which is a pink and green book. 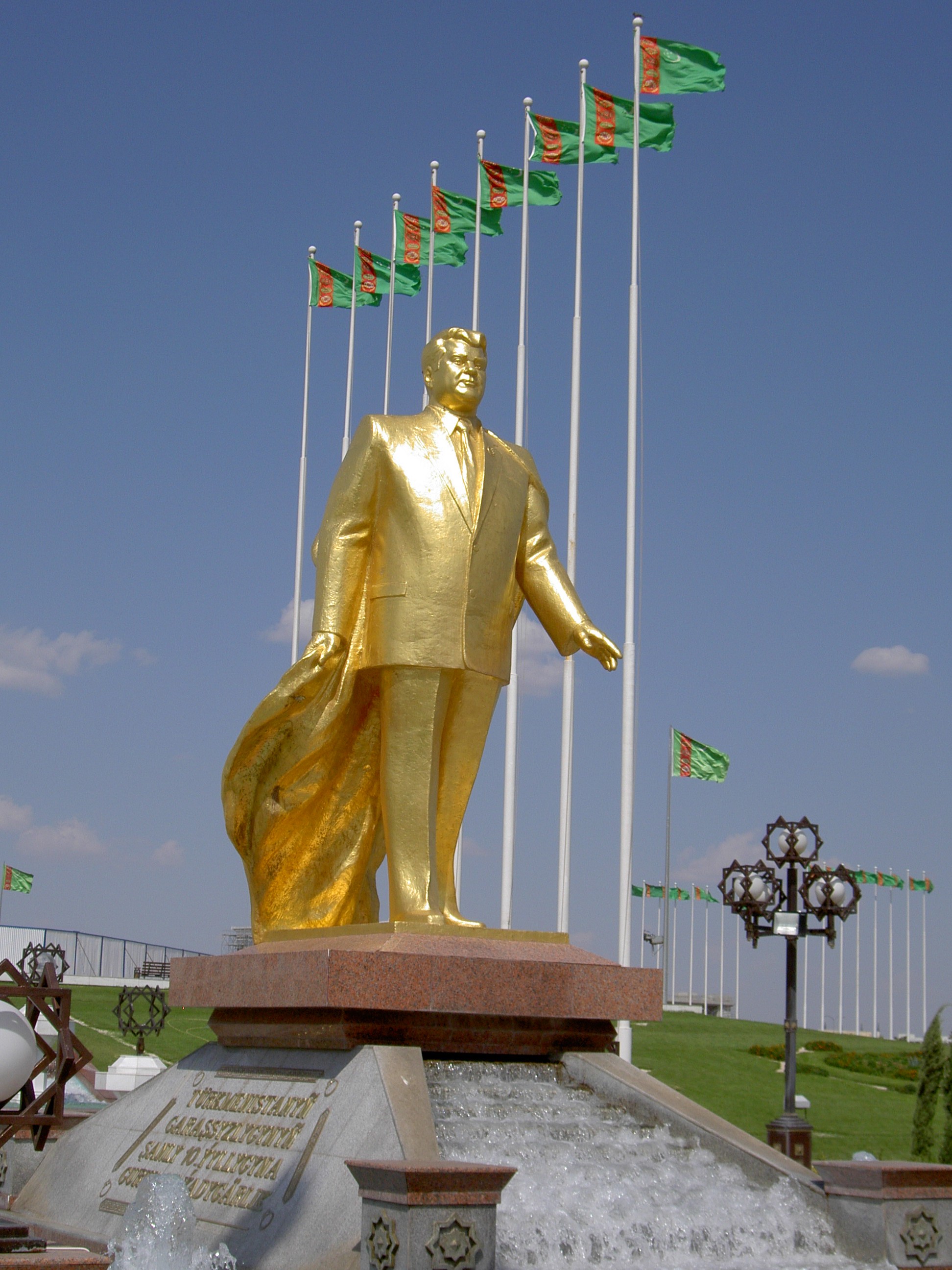 The Cult of the book

A book has the effect of giving more legitimacy to what is written. This is a psychological effect which books or written texts have on all people. A spoken text can be argued with easily, but it is psychologically more difficult to argue and dispute with the written word. Dictators know this very well.

The park is centered around a huge statue of the pink and green book. My city guide told me that the book can be opened using a motor. If openrd the book shows two empty, white pages on which images depicting the grand achievements of the president can be projected. The motor is not that sturdy though and because of that tbe book is kept closed most of the time except e.g. on festive days commemorating a grand day in history. 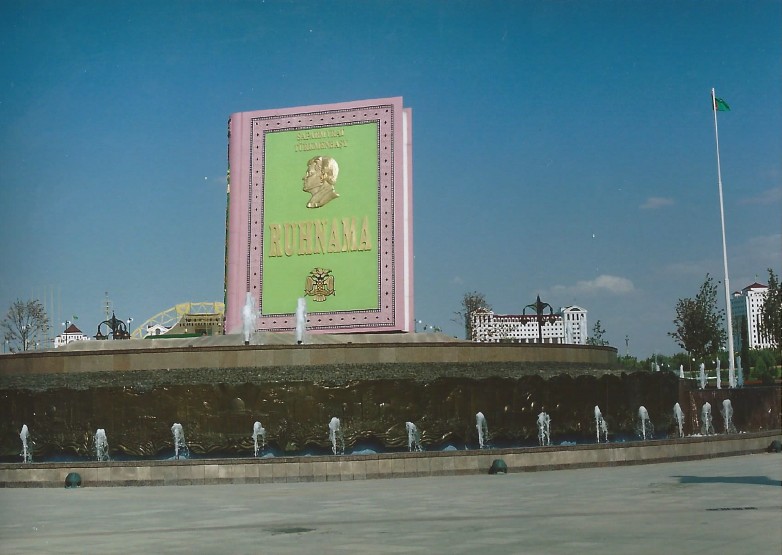 At the base of the statue are many fountains… 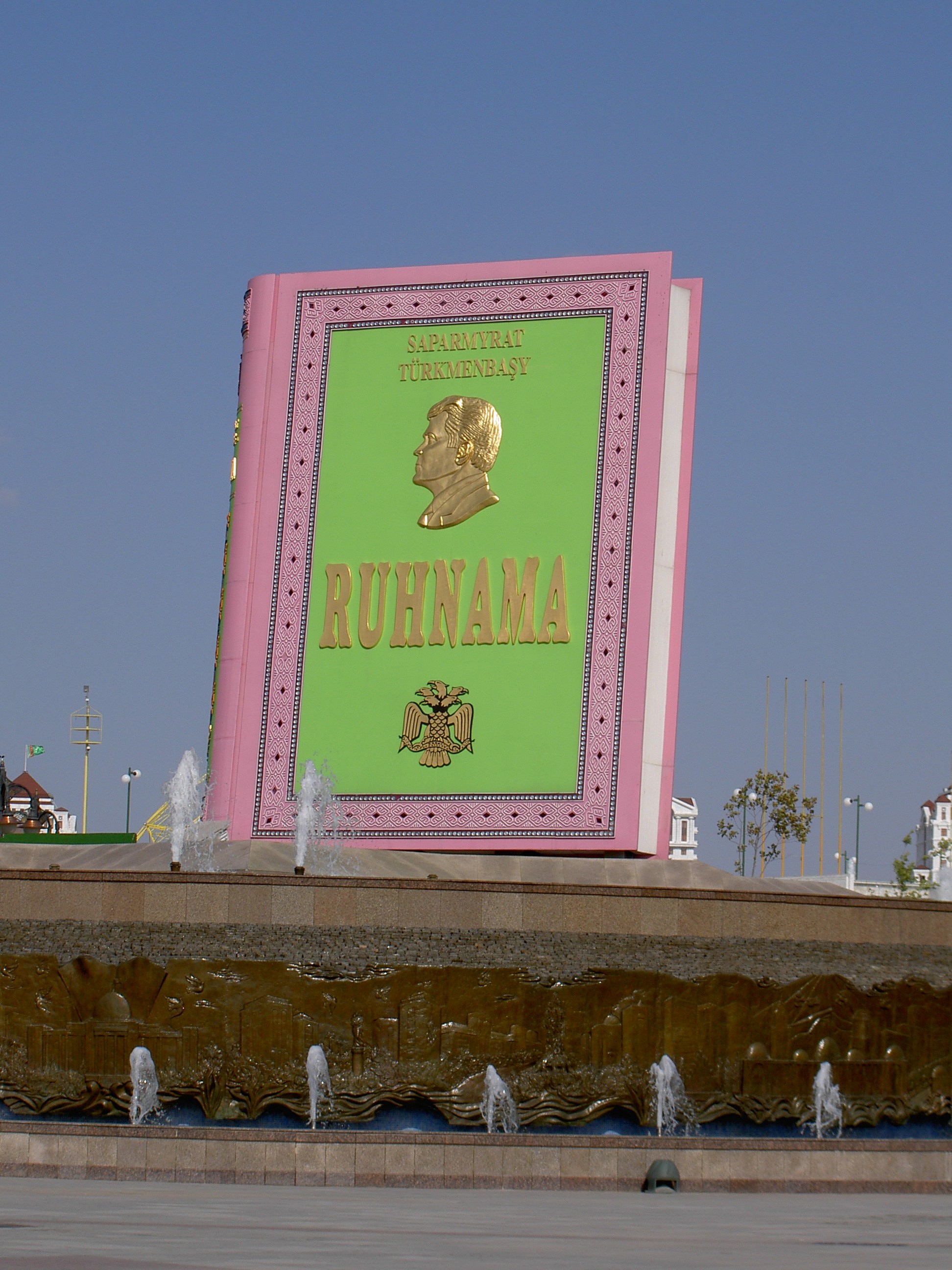 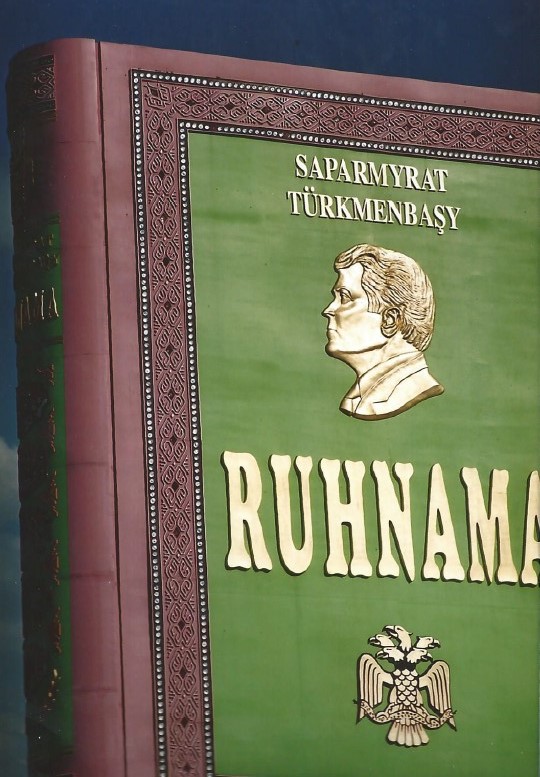 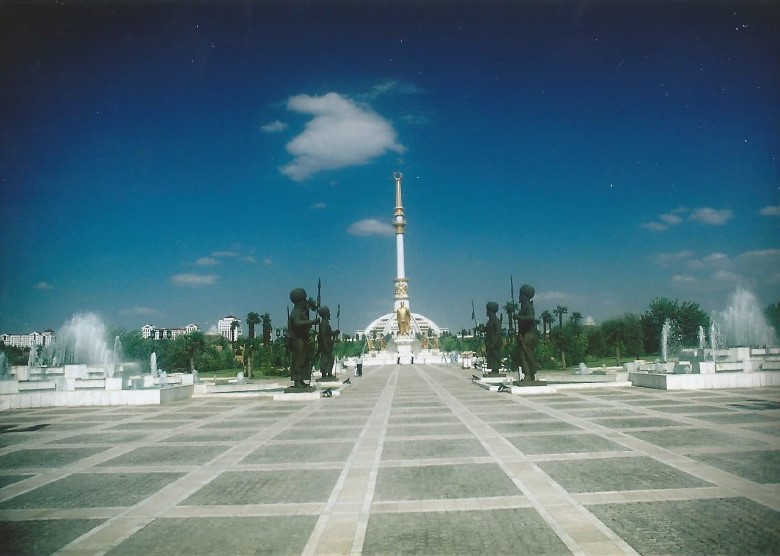