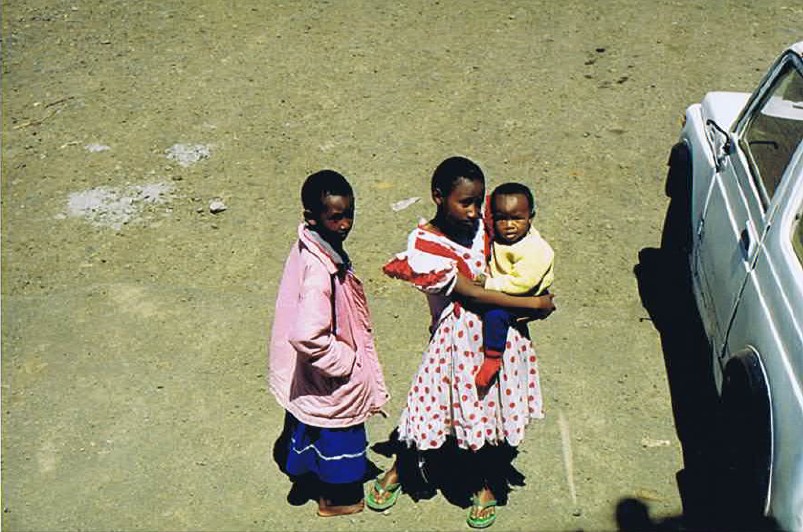 The Wandelgek crossed the Kenya and Tanzania mainland in September and October and then went on to the isle of Zanzibar (Unguja).

This picture was taken in Nairobi at Yomo Kenyata Airport. From there, The Wandelgek moved northward to the Central Highlands of Kenya, which is relatively cool and fertile. Near the town of Nanyuki a camp was installed and then a hike through the nature and history of Kenya, on the slopes of Mount Kenya, the second highest mountain in Africa followed.

The Central Highlands of Kenya is are a paradise for farmers. It is said that the area has one of the most perfect climates in the world with abundant rainfall, warm days and cool nights. Tea, coffee, eucalyptus and pine trees thrive in the higher areas, while oranges, corn, pineapple and bananas grow on the lower slopes. It’s no wonder this region was popular with the white settlers, who began arriving en masse after the Mombasa-Uganda railway was completed,from the start. The Central Highlands provided a perfect environment and climate to grow crops throughout the year for the European market. Also, it was not surprising that the resentment of the Kikuyu about their precious land being confiscated and themselves being deprived of their fundamental rights, grew. Their alienation reached a boiling point in the Mau Mau uprising, when a war between the settlers and Kikuyu over land rights was fought. As a result, the British colonial authorities were forced to eventually recognize Kenya as an independent land.

Although many farmers, who descended from the settlers, run a farm in this area, there were only a few of the huge colonial estates transferred. The bulk of the land was returned to the Kikuyu and divided into intensely cultivated lease plots. Currently, an important environmental threat in the highlands is soil erosion caused by deforestation of an increasing amount of hectares per year.

According to a legend of the Kikuyu, Mount Kenya is the home of the gods. The mountain is 5,199 meters high. Kere-Nyaga or Mountain of Whiteness is the second highest mountain in Africa. It can be seen from a mile away, usually in the early morning when clouds obscure the view. Mount Kenya is a volcanic cone whose last eruption was two million years ago. The steep valleys surrounding the summit were carved by glaciers. There are only seven glaciers, which is a drastic reduction from the eighteen glaciers observed in 1893. Some environmentalists predict that the existing glaciers have disappeared within 25 years. 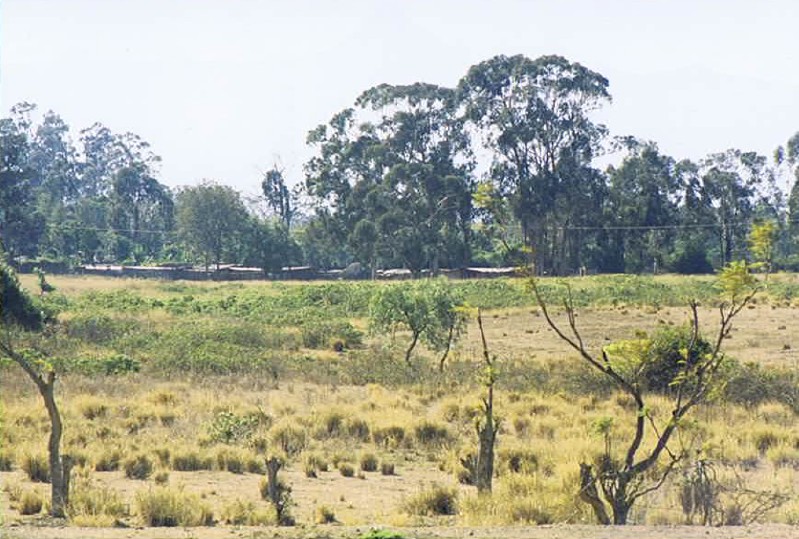 Mount Kenya, completely invisible because of clouds and a fierce sun… (Nanyuki, 23-09-2002)

It was a hot and moist day in the summer of 2002 when I did a long guided hike on the slopes of Mount Kenya, Africa’s 2nd largest mountain. We were educated about plant life and why it was important to not use aftershaves or perfumes when on a walking safari. The local park rangers were burning broad tracks of forest, removing trees and bushes. I asked my guide why they did this and he told me it was to prevent large forest fires. The treeless areas prevented the fire to get fuel and these areas needed to be wide because that prevented strong wind to send sparks to other areas of forest. The locals had learned this technique after several disasterous infernos in the past had killed lots of animals and burned lots of trees. The forest that grows after a fire has much less biodiversity and it takes decades to grow a new forest with diverse tree types. Specific animals are dependent on specific trees. 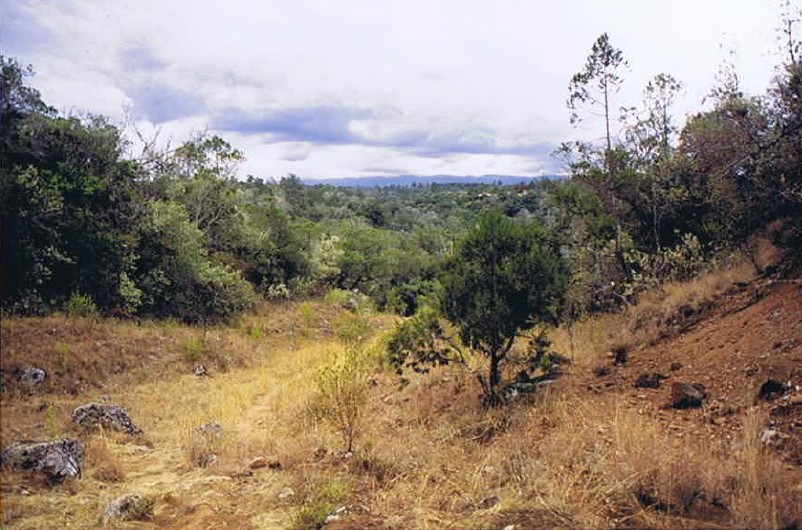 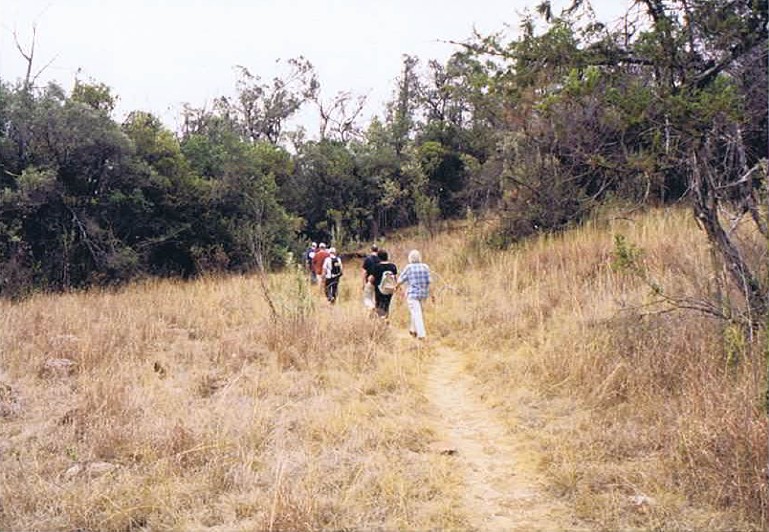 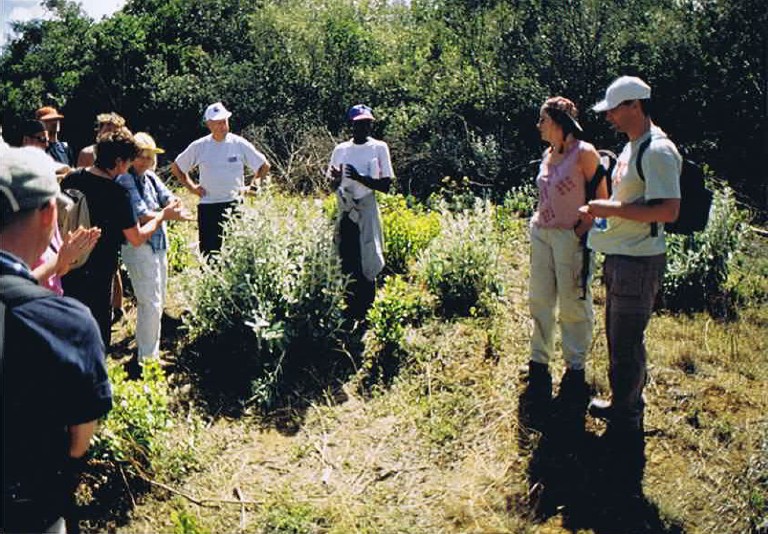 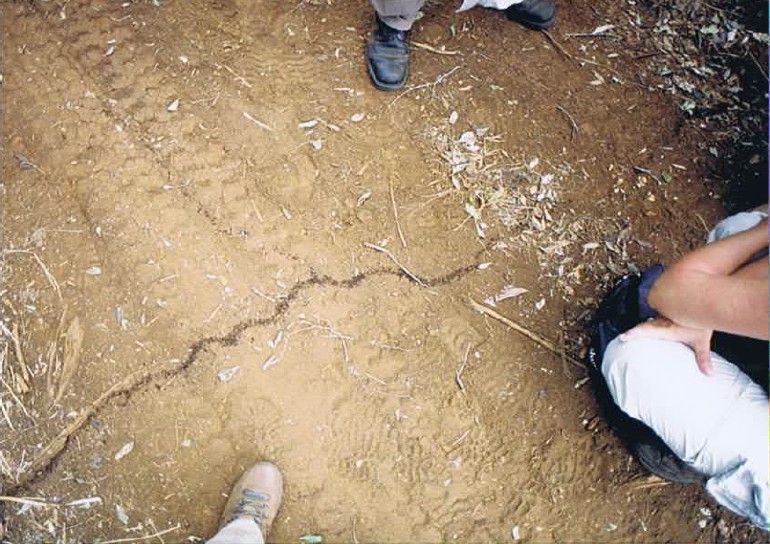 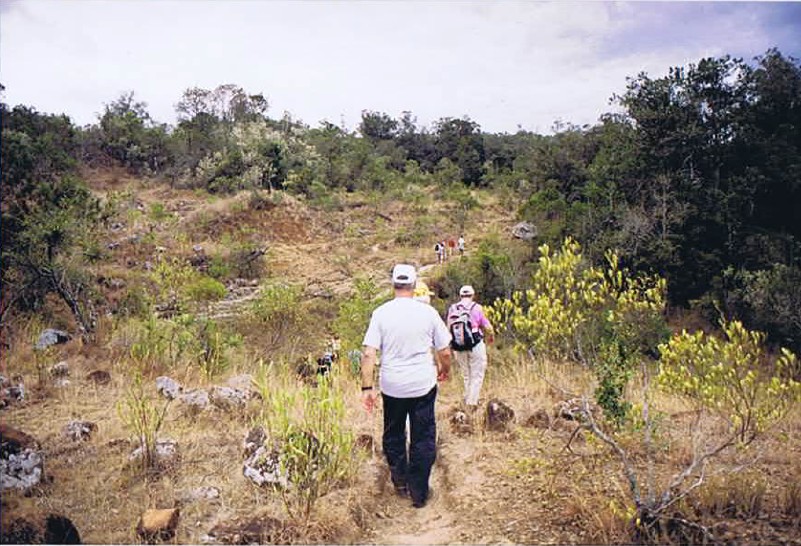 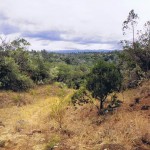 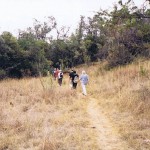 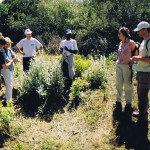 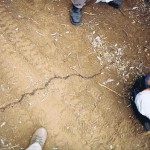 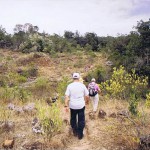 We also visited a cave of the former Mau Mau rebels. They once fought against the British colonial army for an independent Kenya. The caves protected them and they could hide but the army discovered this cave and blew up its roof with dynamite… 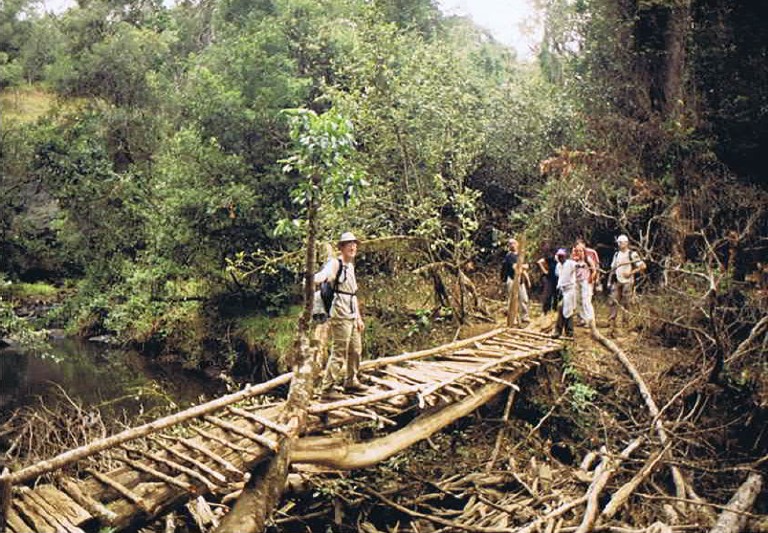 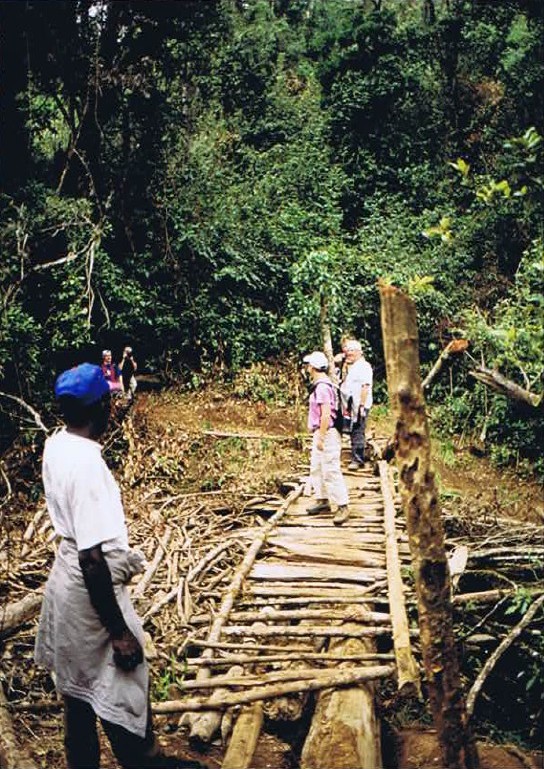 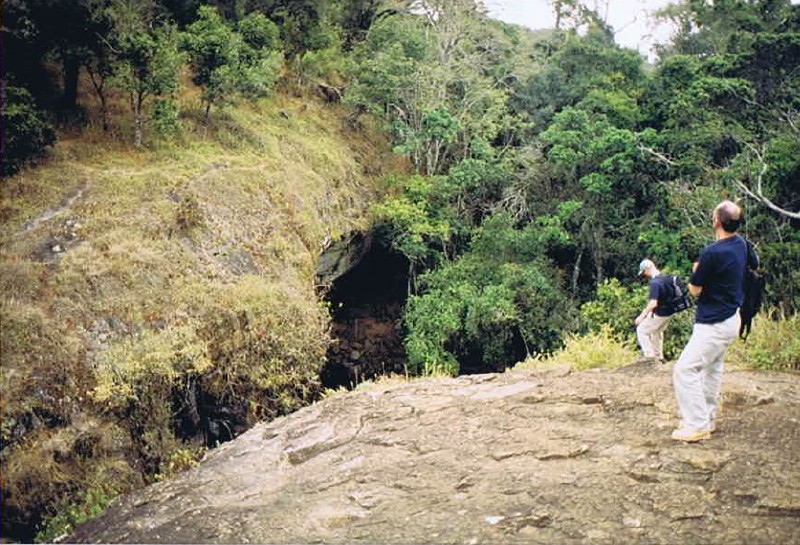 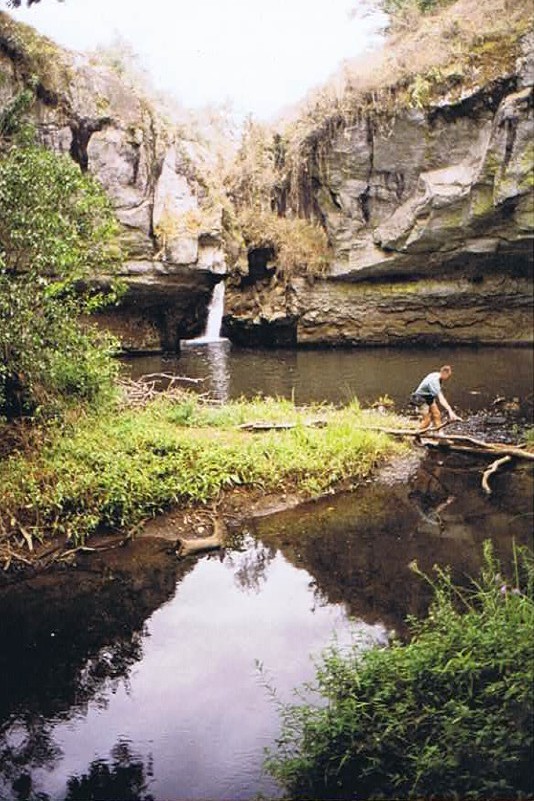 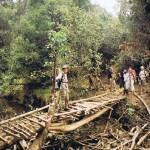 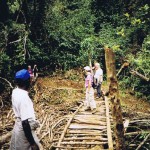 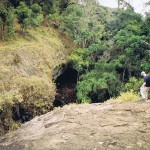 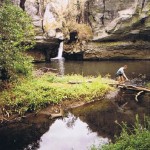 Nanyuki and the Equator 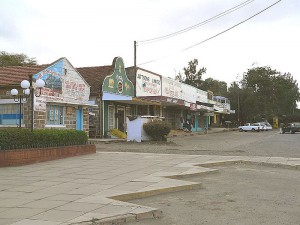 Nanyuki is a market town in Laikipia County of Kenya lying northwest of Mount Kenya along the A2 road and at the terminus of the branch railway from Nairobi. It is situated just north of the Equator (0° 01′ North). It was founded in 1907 by British settlers, some of whose descendants still live in and around the town. Nanyuki is currently the main airbase of the Kenya Air Force. The British Army also keeps a base at The Nanyuki Show Ground (NSG) from where it conducts yearly desert and jungle training exercises on the mountain and in the arid areas to the north. 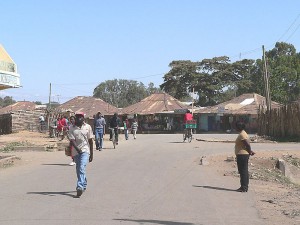 The British army has a base, where it will train annually at Mount Kenya and in areas north of Nanyuki. 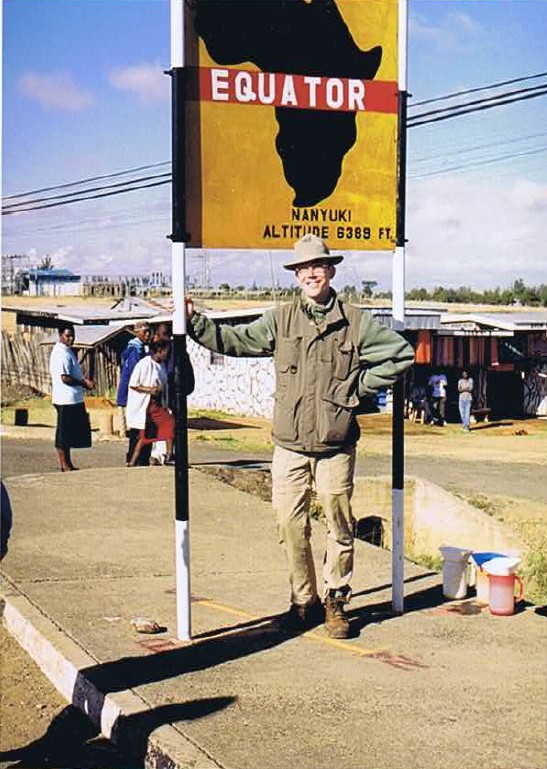 The town was started by British settlers during in the early days of colonial Kenya in 1907. Some of their descendants still live in or around the town. The town is today multi-cultural and is the market center for farms, ranches, game parks and wildlife conservancies in the region. It’s also the base for people seeking to climb Mount Kenya, the most famous landmark in the country. The Equator line passes 6.5 km (4 mi) south of this town.

Nanyuki municipality had an urban population of 31,577 in 1999. Most members of the population earn their money through trade. Shops in the town supply many farms, ranches and game parks in a wide circle. Originally, most shops were owned by Indians, who still form a sizable part of the population. Climbers and backpackers visit Nanyuki on their way to or from Mount Kenya along the Sirimon and Burguret routes and many other tourists pass through the town. Nanyuki therefore has many hotels, of which Mount Kenya Safari Club and Sportsman’s Arms Hotel are the most prominent and best known. Other hotels include Lion’s Court, Equatorial Hotel, Mount Kenya Paradise Hotel and Joskaki Hotel. The oldest restaurant in town is The Marina and it is still fairly popular. Several years ago, a restaurant was opened south of Nanyuki built inside a huge tree. Named “Trout Tree Restaurant” its main attraction is obviously trout prepared in various ways. Patrons can also visit the trout breeding installation at the foot of the tree. Another notable restaurant is “Barneys” located at Nanyuki Civil Airfield, once the base of the No. 1340 Flight RAF, which flew Harvards during the Mau Mau Uprising.

There is little large-scale industry in Nanyuki. There used to be a textile factory, Mount Kenya Textile (Mountex) Mills. The British management deteriorated over the years, which largely contributed to its bankruptcy in 1978. Years later, the factory, which had remained more or less intact, was bought by an Asian businessman, an inhabitant of Nanyuki. Some textile was produced. The factory eventually closed due to cheap imports and outdated machinery and finally was looted to the ground. There have also been a number of sawmills in Nanyuki. However, with the almost total ban on tree felling on Mount Kenya, these either closed down or are now eking out a difficult existence. Recently, large horticultural operations have come to Nanyuki.

A park lies in the centre of the town and two rivers, the Nanyuki and Liki Rivers, pass through it. The Equator passes through the southern part of Nanyuki. One crosses it when approaching Nanyuki on the A2 from the south. This spot is popular with tourists who have themselves photographed there. Some people are usually at hand to show them the supposed effect of the Coriolis force, which they say makes draining water swirl clockwise or anticlockwise depending on whether one is on the northern or southern hemisphere, though as noted in the article about the Coriolis force, the effect is detectable only in the laboratory and the “demonstrations” at the Equator are merely engaging diversions.

Nanyuki can be reached by air. Its airport lies 6.5 km (4 mi) south of the town and is served by light aircraft along the highway to Nairobi . There is a regular air service by Air Kenya, which is very convenient for businessmen and tourists. The town is also reachable using the all weather road from Nairobi. Tourists can visit a number of parks and reserves in the vicinity of Nanyuki, the most obvious one being Mount Kenya National Park. Others are Sweetwaters Game Reserve, Lewa Wildlife Conservancy, Samburu National Reserve and Shaba National Reserve.

The creative space, restaurant and bar at the Lily Pond Arts Centre is a wonderful retreat.

Nanyuki has some of the cleanest water in Kenya since the water supply source is a river from Mt. Kenya. The entire water system is gravity fed, from the supply to the sewer system.