↓
Home→Feature→10 Reasons to remove Greenland immediately from your bucketlist

So I went to this island named GREENLAND and expected lush green valleys bordered by palmtrees and green meadows. Instead I found a small border of mostly barren rocky land with meager green patches of small weeds and an overwhelming area of 85 % of the country wrapped in cold white ice. This is ICELAND was my first thought and I tried remembering if I had drunk to much beer at the airport and had boarded the wrong plane. NIGHTMARE. 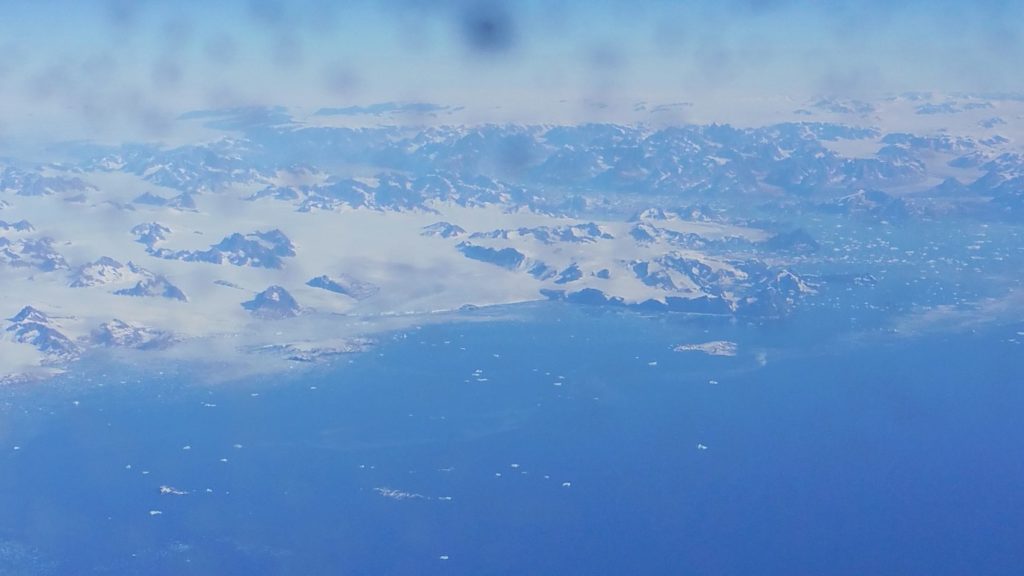 Dreadful: 15% of thawed coastline and 85% of chilly icecap…

OK so I expected this palmtree infested island somewhere in the Caribean sea where I could stretch my towel and lie down for some sunny days of old fashioned baking my skin in the sun. Instead, temperatures never rose above 15 degrees Celsius but plunged towards a deep of 5 above zero and the seawater was about 5 degrees above zero. And it was mid SUMMER 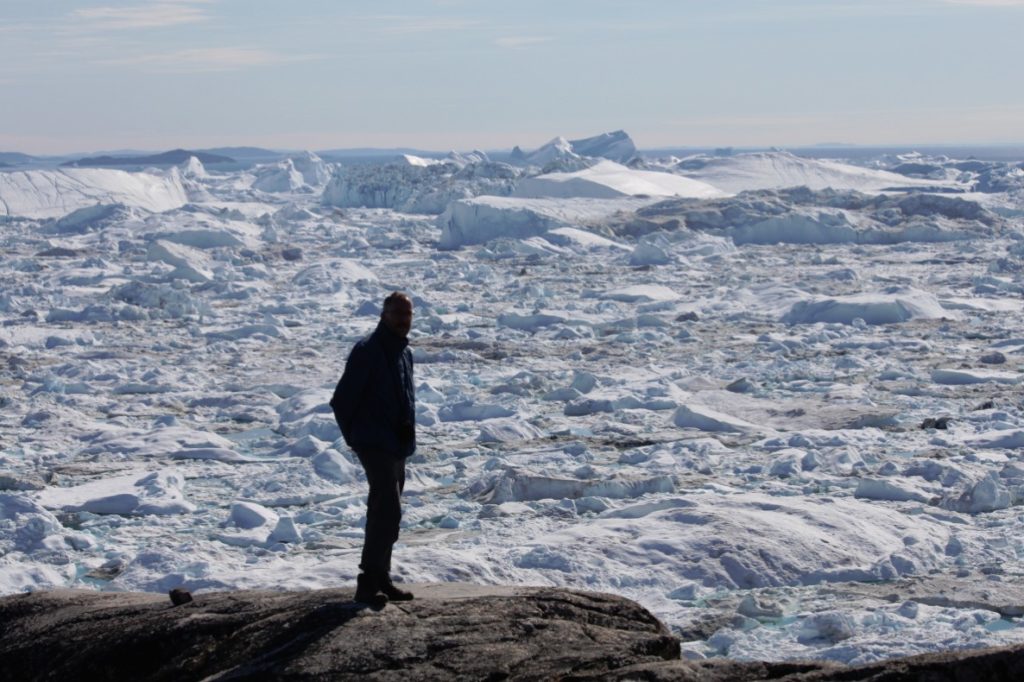 The awful climate and weather conditions were very hard to resist…

Ah yes. The famous polar day where everyone is joyous, overly happy and overly active during the period of around 3 months where the sun doesn’t go down. Well I couldn’t sleep of that continuous light and got tired of those overly active people and more and more grumpy of every ridiculously happy face I saw. I should have arrived here in winter when the sun doesn’t rise at all and everyone gets grumpy or depressed. Not that it would make me happy, but then at least I would fit in. 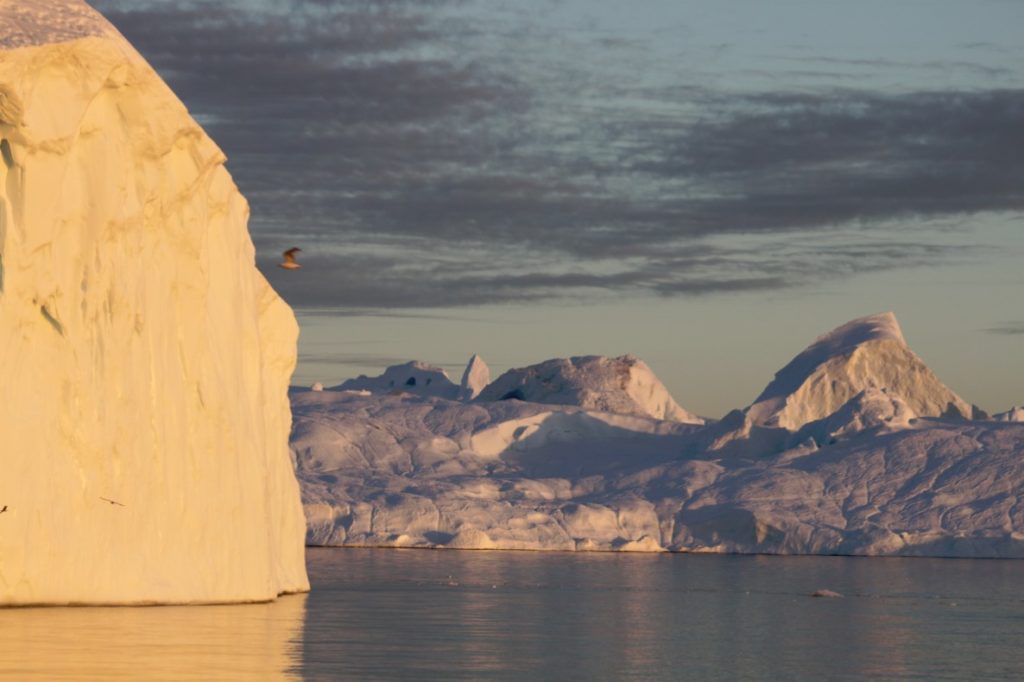 The sun keeps you from getting your well deserved night’s rest. Instead you’re supposed to go looking at icebergs at midnight…

But it gets much worse now. As I had been dropped on this island of malfunctioning expensive transport and lacking infrastructure, this icy prison, where I couldn’t leave, I did need to find some activity to pass the boring dread of the 24 hour polar day. But the only activity I could find was walking. Not walking on pavements bordered by exclusive haute couture shops or haute cuisine restaurants bearing at least 3 but preferably more Michelin Stars and my driver driving my cadillac a few paces behind me. Noooo, I had to carry my own luggage in a backpack and walk on dirt trails that seemed to go nowhere but to cold spiky glaciers or windy valleys with little green weed plants carrying almost invisible flowers. 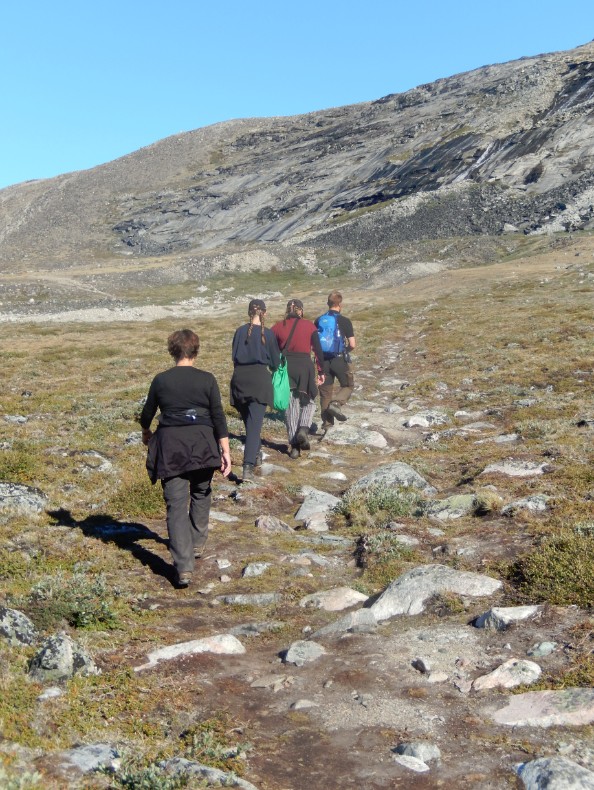 But that wasn’t the worst. The first day I walked I noticed these nice little butterflies with colorless wings that danced around me like happy little elfs. In the evening I looked in the mirror and thought I had caught the measles. These little butterflies were Mosquitos said the doctor whom I consulted immediately and laughing he prescribed me three bottles of a smelly substance named DEET with which I had to cover myself every 8 hours

and a mosquito net to cover my head

It’s the only thing that helps against mosquitos and black flies.

But still it gets worse. Yes black flies. The DEET kept the now obnoxious mosquitos from stinging, not from dancing continuously around my face. So I had to wear the mosquito net and I began to understand how it must feel to wear a burka. But the DEET didn’t stop the black flies from biting and wringling their tiny vampirelike bodies into my shoes and socks to bite me …where no fly has gone before … And again at evening I felt I’d been struck by a measles epidemic.
SICK 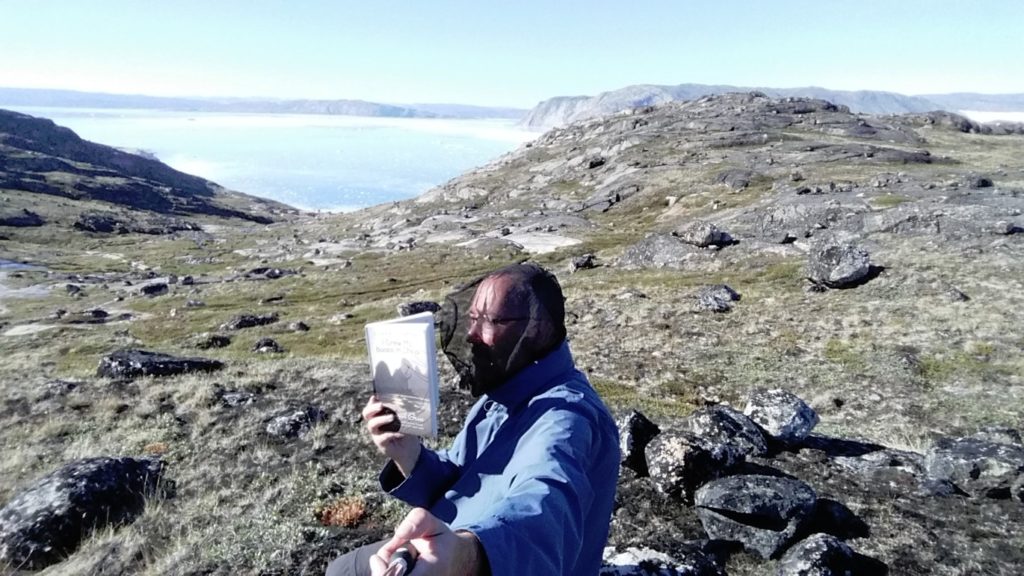 DEET and mosquito nets, is that supposed to be relaxing?

Whoever came up with the idea that sled dogs are cute should be punished severely for spreading such a lie. Those who’ve been north know what I mean. Look at their head with their mean little piercing dark eyes directed at you and every move you make. Hear their vicious snarls and sad penetrating whaling howls that keep you from sleep at night just as you have closed the curtains to keep out the light of that darn midnight sun. These little monsters are everywhere around the town because the Greenlanders themselves don’t even allow them in town anymore. Oh yeah and they supposedly can pull a sled. IMPORTANT … DUH

Vermin, that’s what they are! 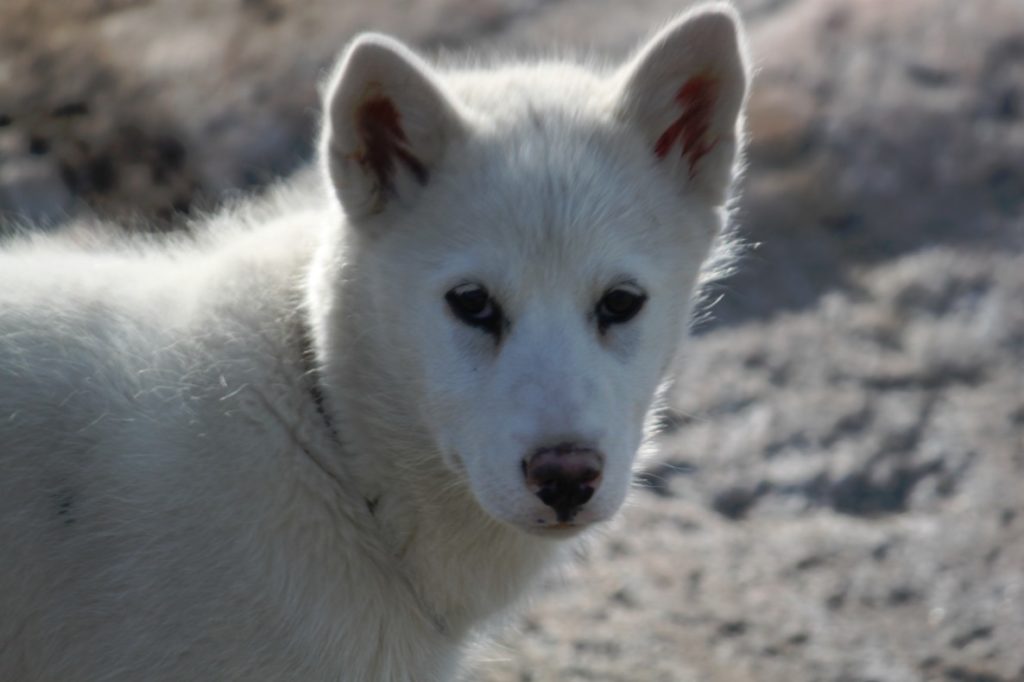 Yes there are some roads in the tiny villages on Greenland’s coast but they stop as soon as you leave a village. There are no regional, provincial or circular roads connecting the villages of Greenland. And the towns you might ask? Aren’t they connected by smooth Interstate highways? Which towns? Nuuk has 14.000 inhabitants and is as capital the biggest village in Greenland. Sisimiut and Ilulissat both have as 2nd and 3rd largest villages less than 5.000 inhabitants 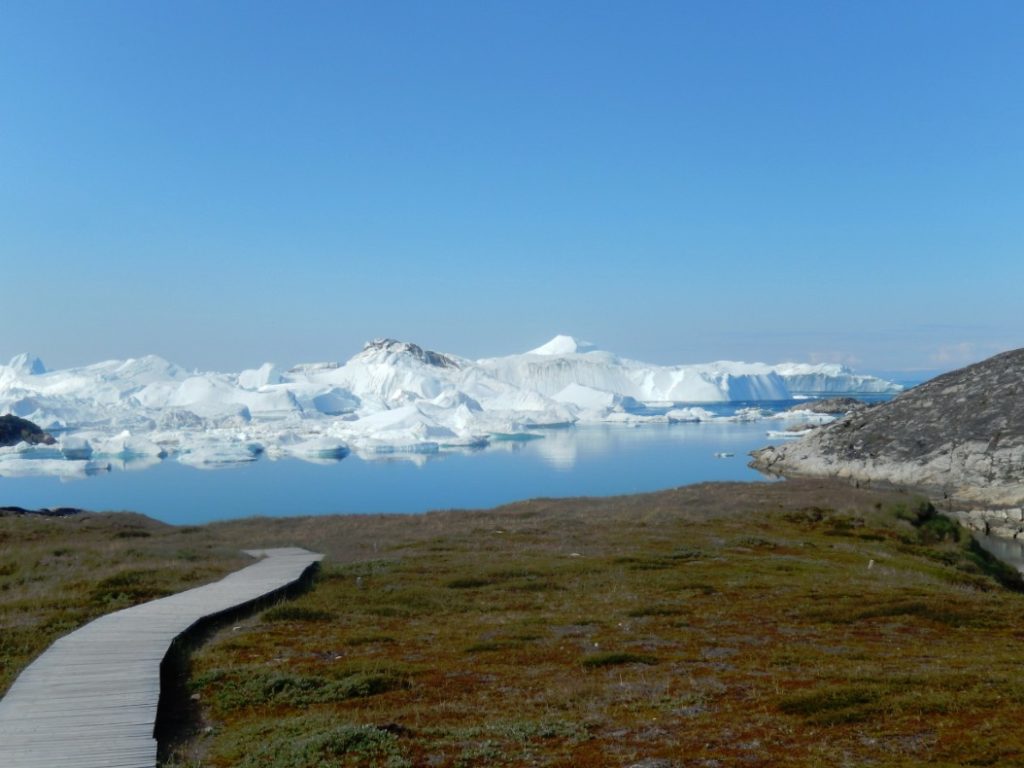 A wooden pathway to a bunch of those overrated icebergs…

The only way to get from one village to another is by plane, chopper or boat. But Greenland has less than 60.000 inhabitants in total and this makes transportation for these natives quite expensive. “Mom I’m gonna visit my girlfriend in the neighbouring village today, but if the chopper is not delayed in any way then I’ll make it for diner tonight”.
Well I found out that transportation wasn’t that expensive for natives at all. How they achieve that? By making transportation for foreigners unpayable!
And then I think I still would have a 50% chance to get delayed for a day or 2. Most airports in Greenland are for inland flights and they are executed by De Havilland 2 engine propellor planes. These obsolete machines from before WWII are no match for thick fog and whenever a fog rises these planes just get cancelled.

And then there are these floating metallic barrels that are used as boats for ferry services or whale safaris. They almost fall apart when looking at them. Yes you guessed it right. Cancellation after cancellation when a rotor broke or when a fierce wind causes the waves to stir a bit.
So there you have it: Steep prizes for a barrel ride or a flight in a plane from the Colonial age. 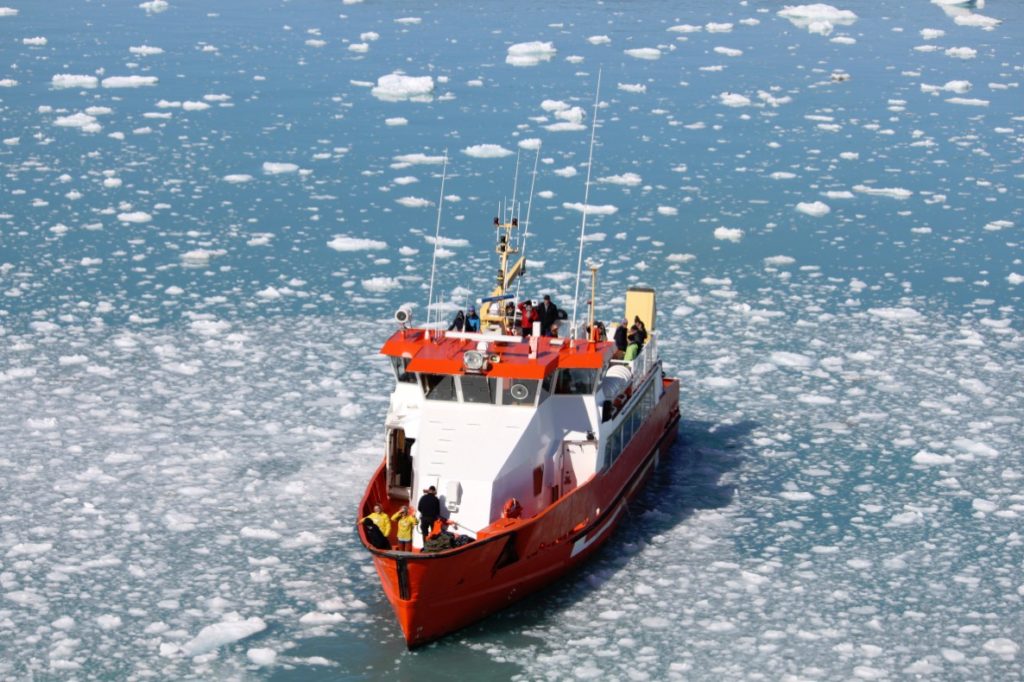 Tiny obsolete and hideously red colored boats that get stuck in these freezing waters, infested with icebergs? Is that your cup-of-tea?

I’ve already written about the steep beer prizes* and those of transportation but in fact this goes for everything. When I was finally relieved from all this agony and I could fly back to my beloved and tranquil Holland, I thought that it would have been an excellent idea if I would have bought beer and food in the tax free zone of the airport. But then again… what about the impossible transportation and horrible infrastructure

I’d probably would have needed a dogsled pulled by those mean little monsters.

I’ve really tried to talk to these Inuit natives but why do they have to speak in such a complicated language where every word seems as long as a certain Welsh station name which I’m still not able to pronounce without endangering my tongue to get spangled in a triple sea man’s knot. 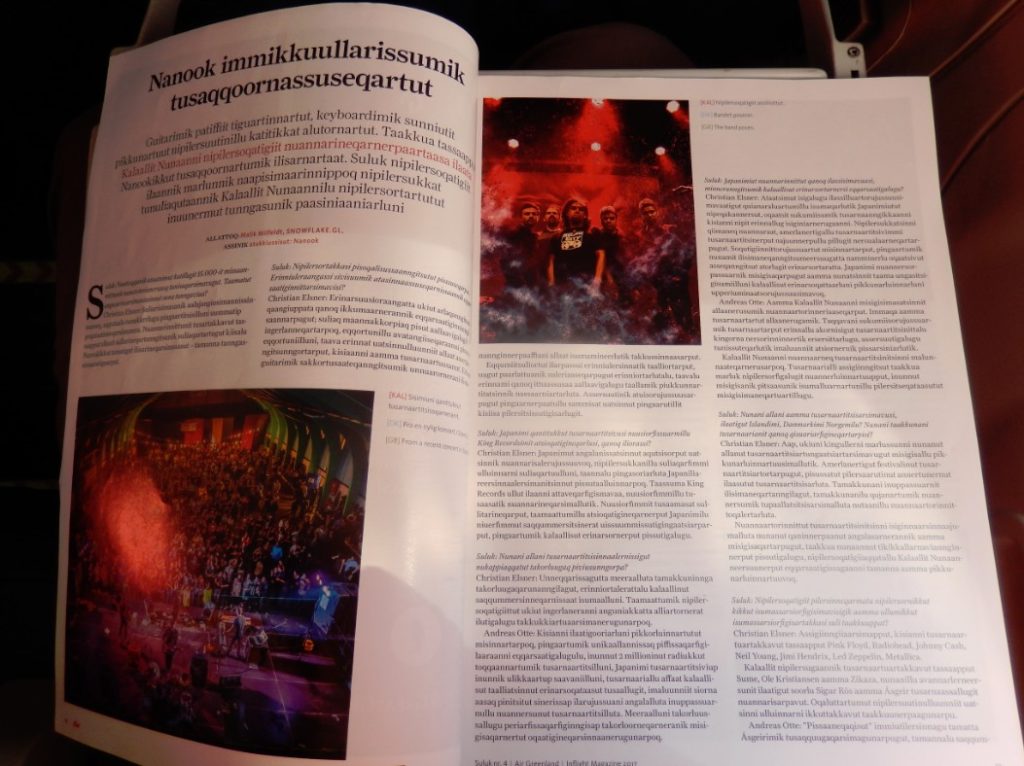 The factor in every journey that can make everything right what got wrong before.
Tender meats, sweet tropical fruits, the necessary bountiful green vegetables, covered in thick rich gravy and sprinkled with fragrant herbs and tasteful oriental spices…..

Well … that … is not the Greenland cuisine.
You can have the likes of whale, seal, fish, musk ox or reindeer. A few potatoes. Sparse vegetables and fruit imported from the tropics and so expensive that it’s good that they are sparsely used, a small beer that causes you to show the bottom of your wallet and some freshly collected unidentifiable green weeds that grow in the wild world outside the village. 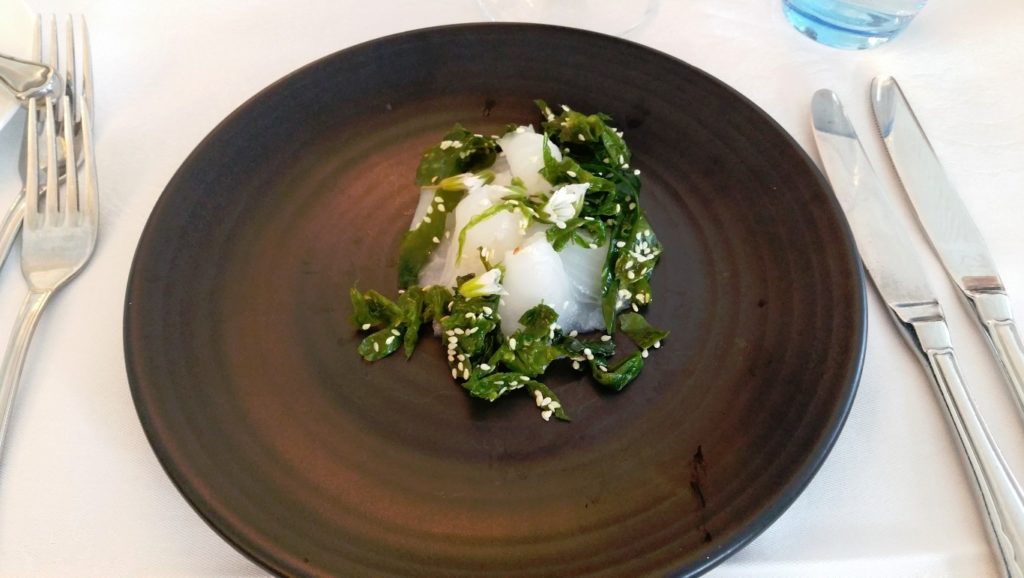 Something smelling fishy and some green weeds sprinkeled on top…

…but of course… if you’re sturdy enough, and if a bit of fog, wind, cold, money spending, airplane cancellations, long distance hikes into the wild and mosquito stings don’t scare you off or maybe if I hear you ask: but what about 10 reasons to put Greenland on top of my bucket list?  Well then I’d ask you to start on top of this blog again and skip this ridiculous text. Just look at the pics again and you’ll see that all the mishaps, all the endurance needed and all the hardness to get through this in a pleasant way, is being overwhelmed by all the beauty of this serene icy land full of friendly people living in colourful homes just on the very edge of the Wild…