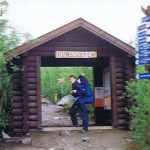 The first day stage of 15 km ran completely through the Abisko National Park.

Abisko is situated in the Swedish province of Lapland near the Norwegian border (distance approx. 37 km (23 mi) by railway), and belongs to Kiruna Municipality, Sweden’s northernmost and largest municipality. It begins at the shores of Torneträsk, one of Sweden’s largest lakes where the village of Abisko is located, and extends some 15 km (9.3 mi) to the south-west. It is situated about 195 km (121 mi). north of the Arctic Circle. The area of the park is 77 km2 (30 sq mi)

Permafrost is common in the national park, though permafrost at lower elevations is disappearing because of global warming and increased snowfall. When The Wandelgek walked this trail back in 1993, this was obviously not the case yet. 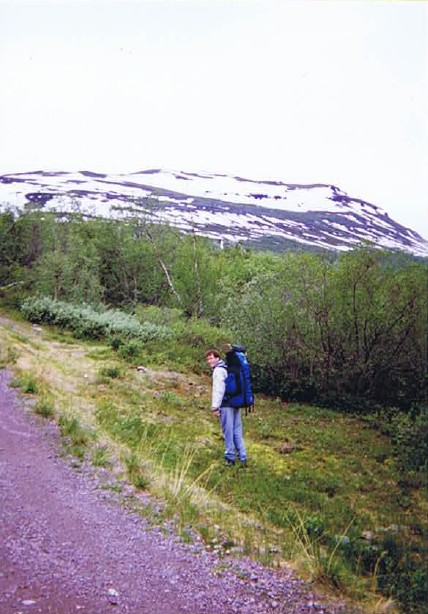 We started walking at the wooden gate marking the beginning of the Kungsleden.

Detailed map of stage 1 (our route is penciled in): 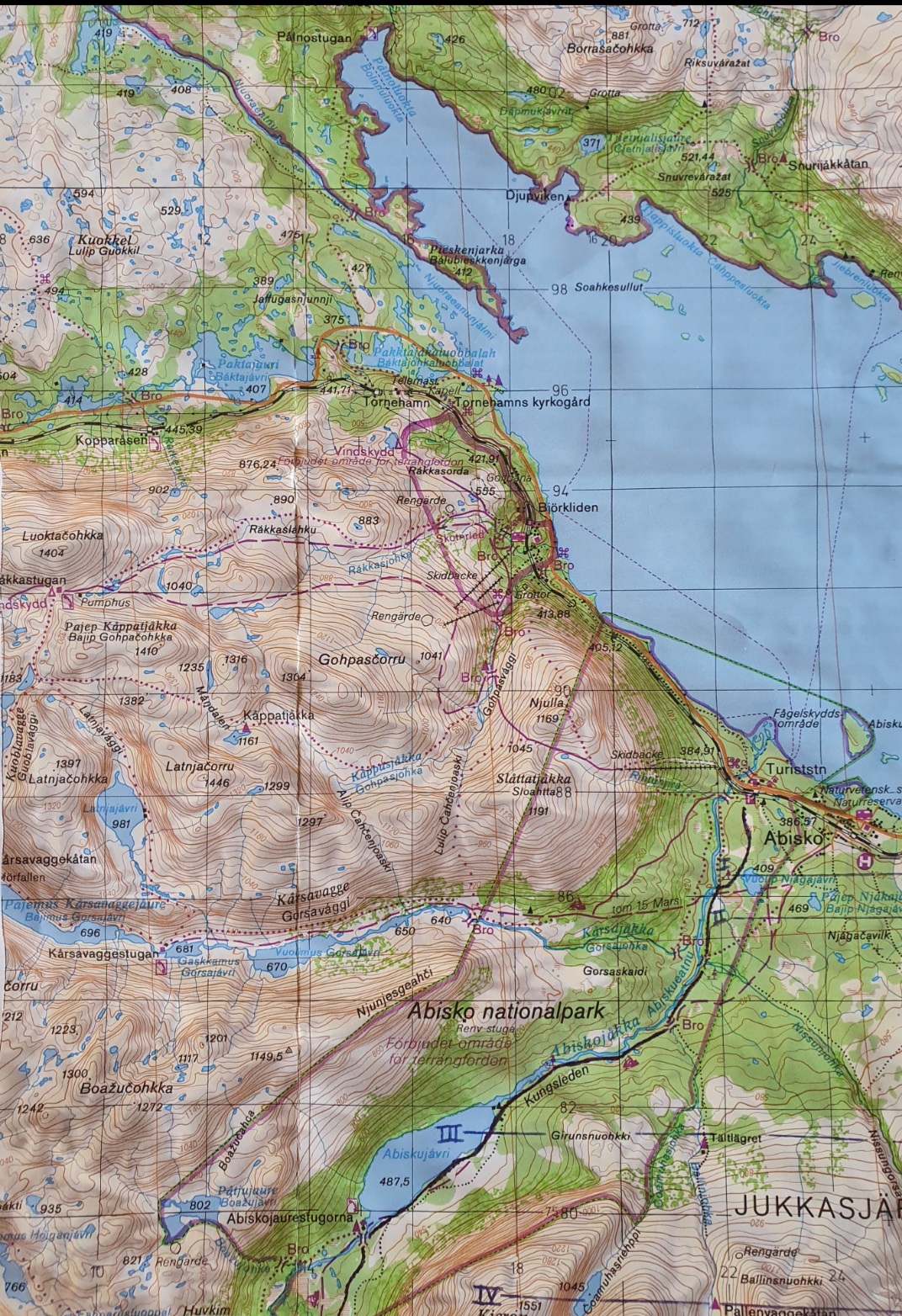 A photo opportunity for hikers is almost mandatory there. 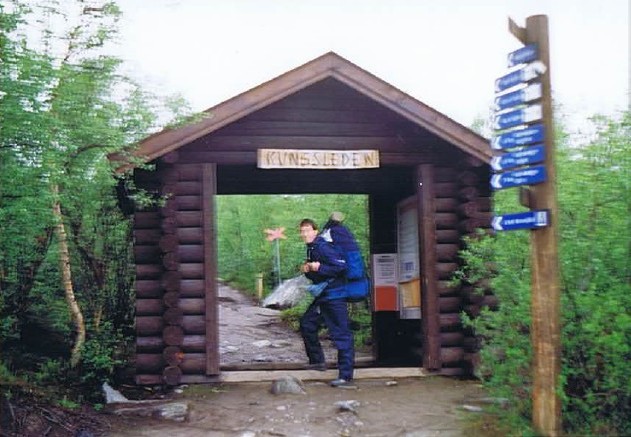 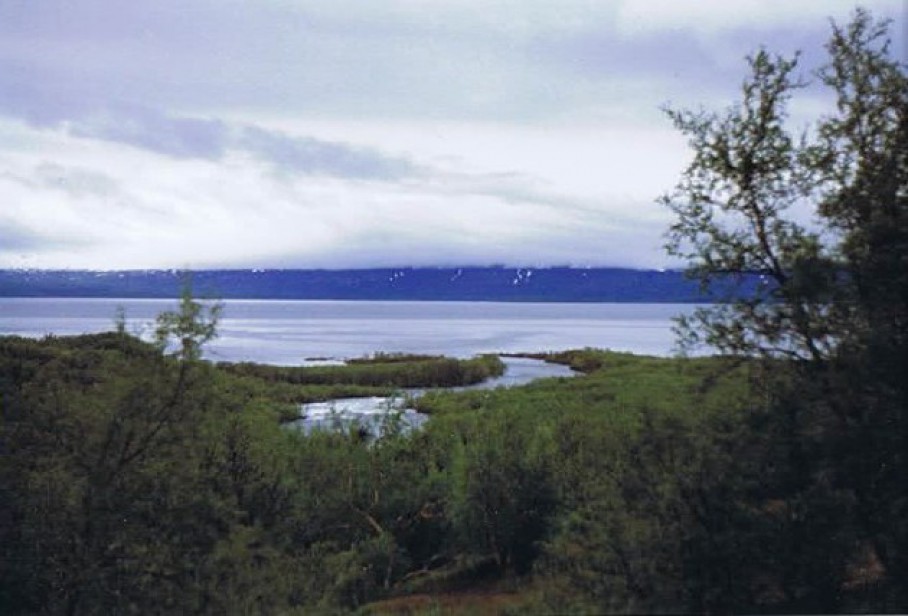 Then the trail followed the banks of the Abiskojakka to the south. Far away I could see the river Abiskojakka flow into Lake Torneträsk… 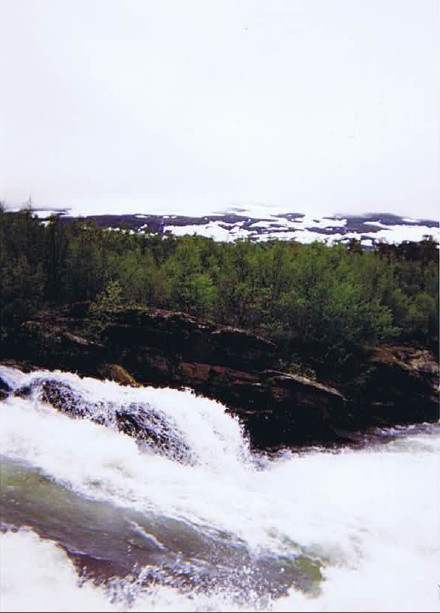 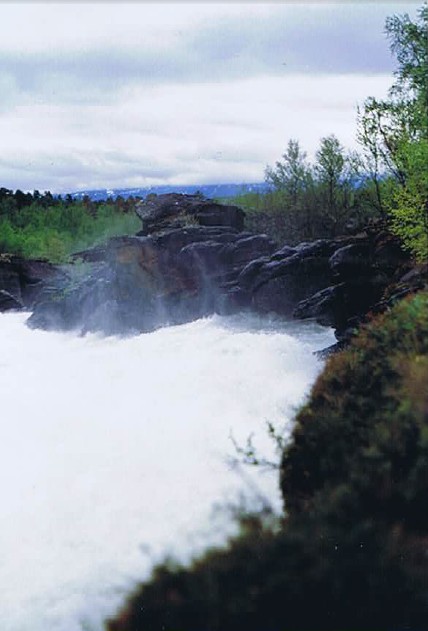 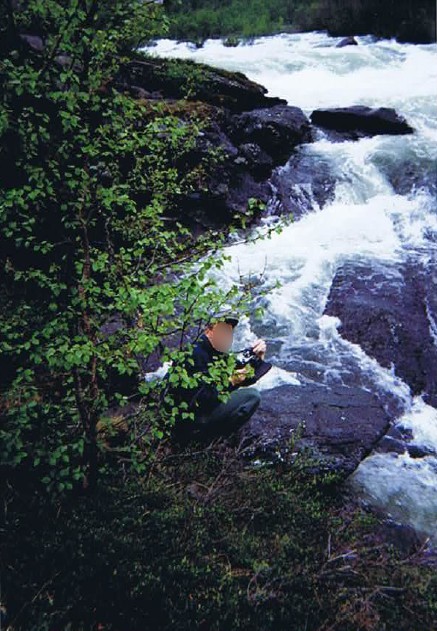 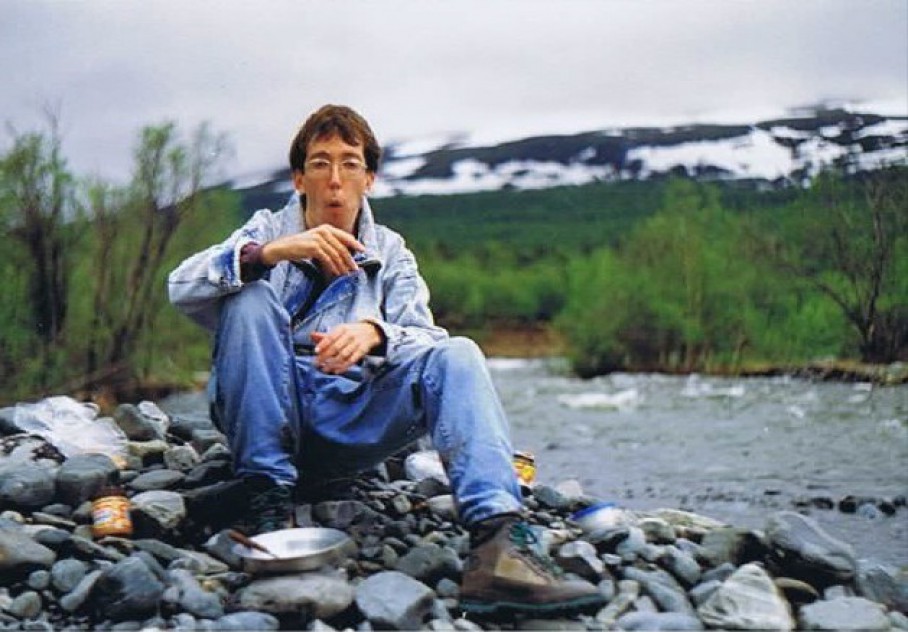 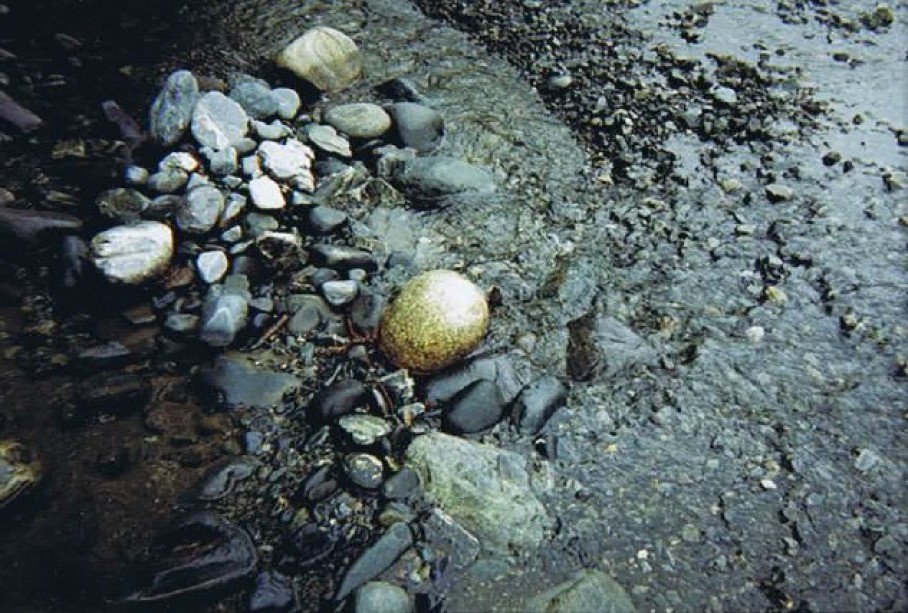 The bigger rivers could be crossed via wooden bridges… 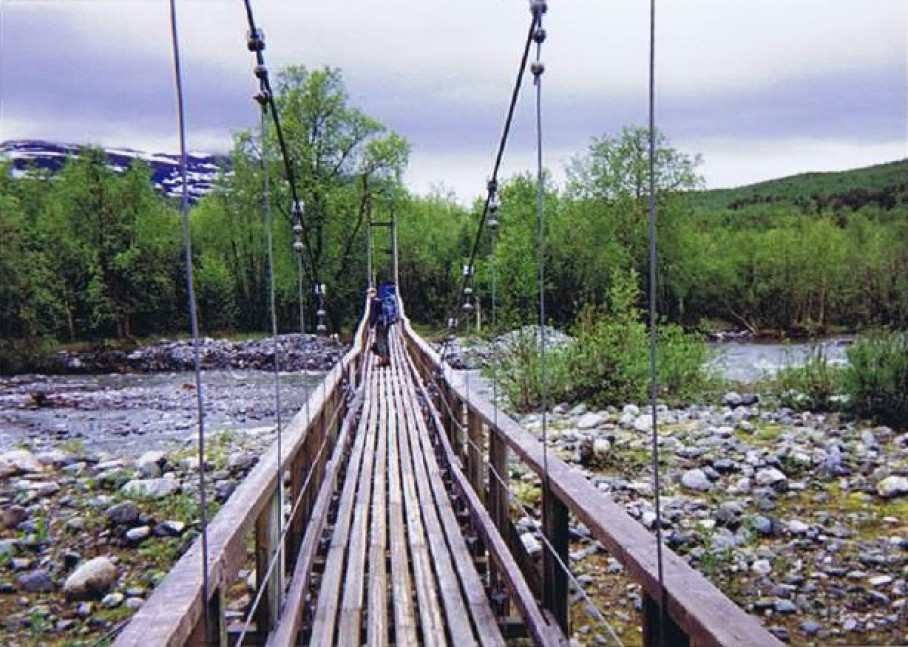 Because of the fragile plant growth, wooden walkways were laid in many places. Crushed plants hardly have a chance to blossom again during the short arctic summers. 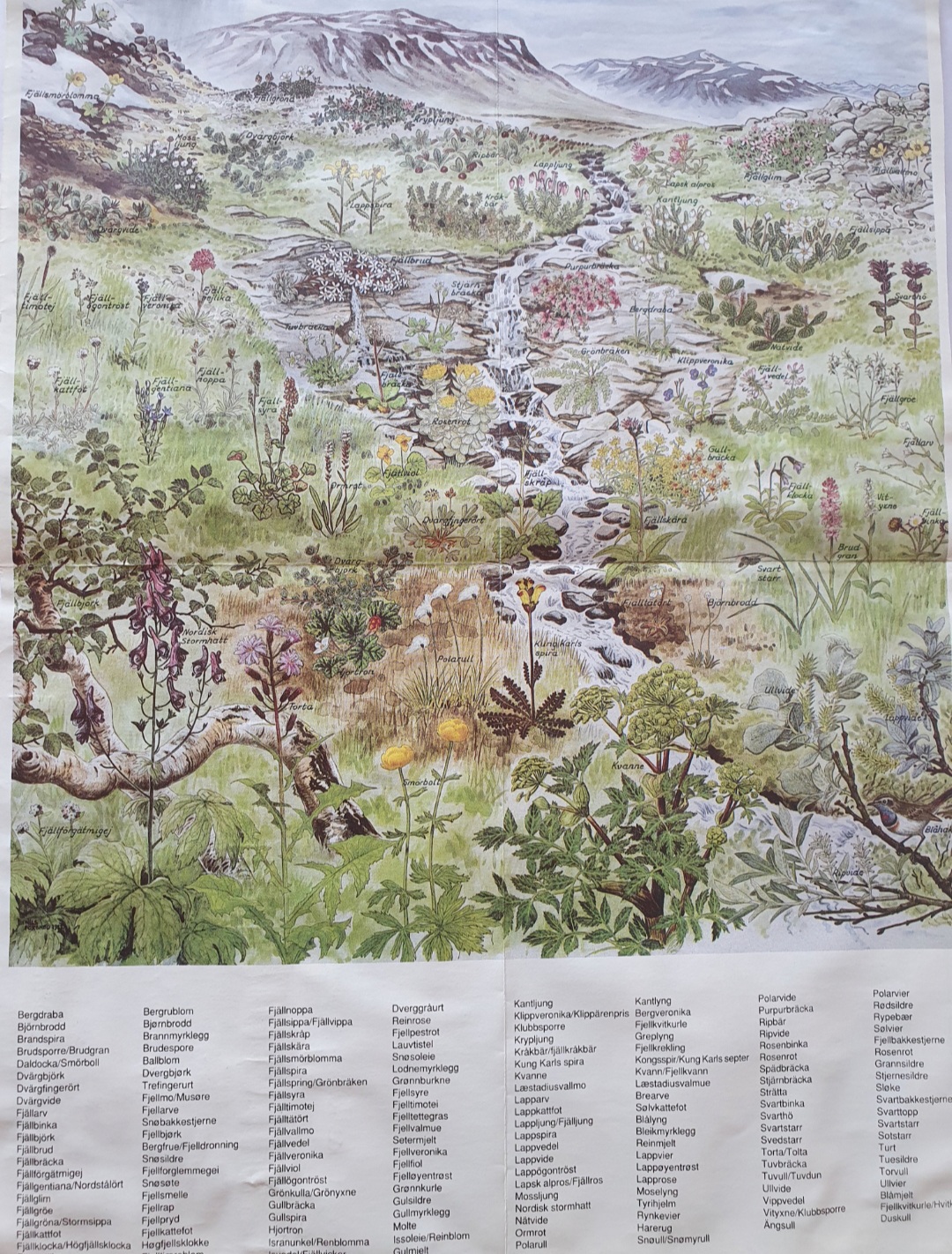 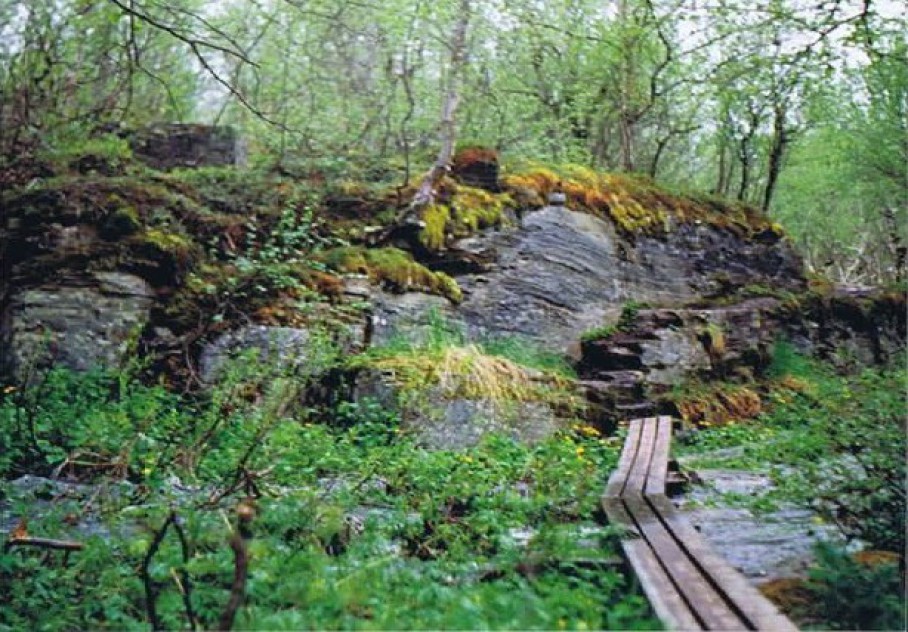 The 440 km (270 mi) long Kungsleden hiking trail, which follows the Scandinavian mountain range, starts (or ends) at the Abisko Turiststation (consisting of a railway station of the same name and the Abisko Youth Hostel) (approx. 4 km (2.5 mi) west of the village itself) and follows through the national park. The Nordkalottruta uses trails of the park as part of its longer passage. The Abisko Turiststation, run by the Svenska Turistföreningen (STF), houses many visitors to the park and provides lodging, food, and other amenities, and is one of many similar facilities located periodically along the Kungsleden trail. The national park is known for its cross-country skiing opportunities, snowshoeing, and other winter sports (Mount Nuolja and nearby Björkliden provides backcountry skiing and freeriding opportunities). As its location is 195 km north of the Arctic Circle, summer hikers enjoy the midnight sun, while winter visitors may find the light pollution-free location ideal for viewing the aurora borealis. 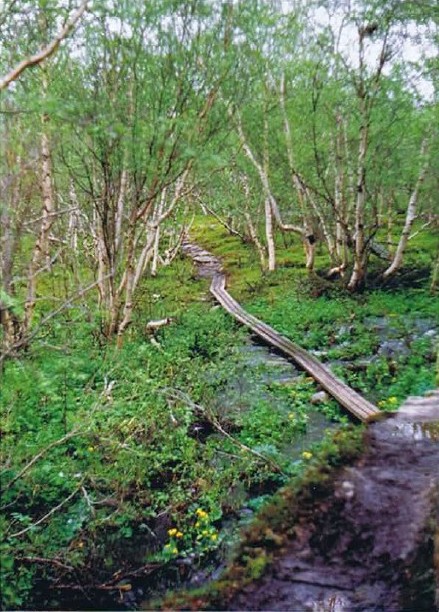 The route ran through scrubs, along rocky riverbanks and through marshy riverbeds. 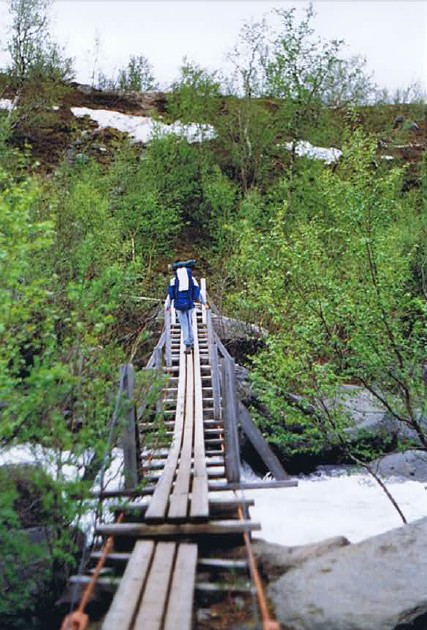 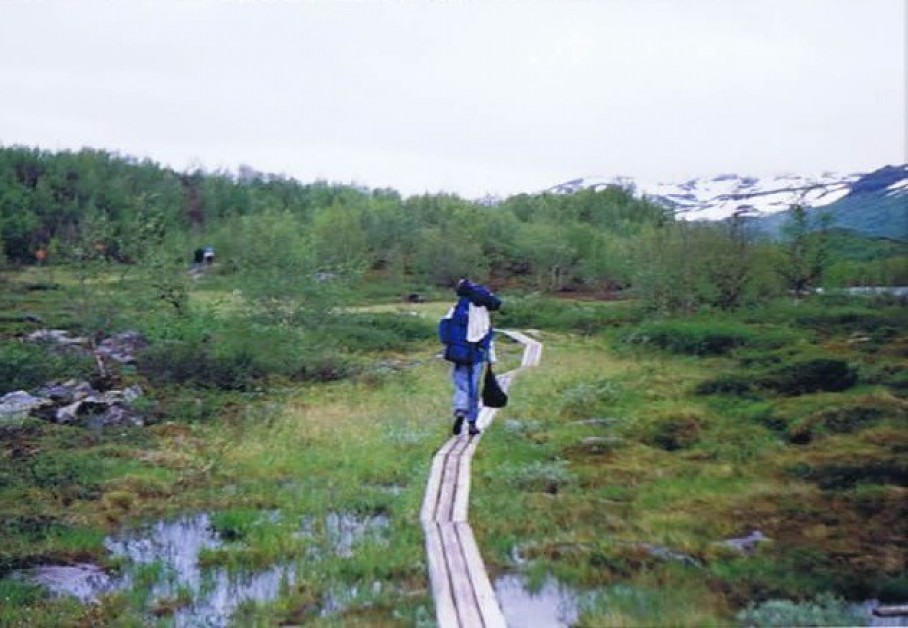 The path here was still reasonably well signposted and visible. Often river tributaries had to be crossed via snow bridges. 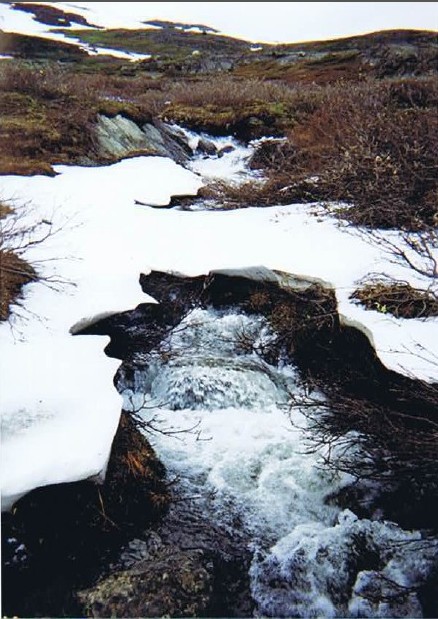 After about 16km we came to the Abiskojaure (Abisko lake)… 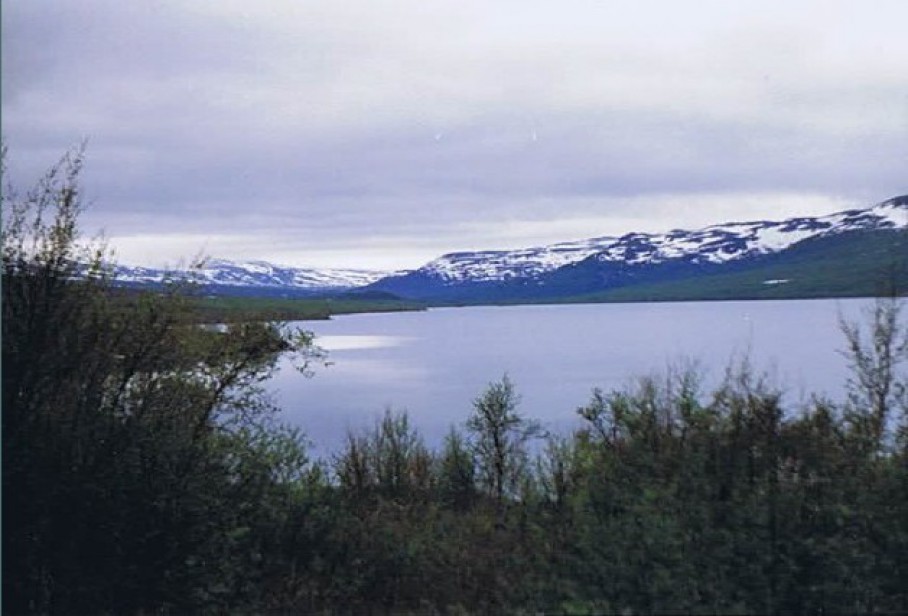 and we saw the 1551 meter high Kieron on our left. We walked to Abiskojaure stugorna (Abisko lake huts) at the other end of the lake but decided not to go camping there. From the lake the path began to climb strongly towards our first mountain pass. We climbed somewhat and found a nice viewpoint over the lake, where we could set up our tent. 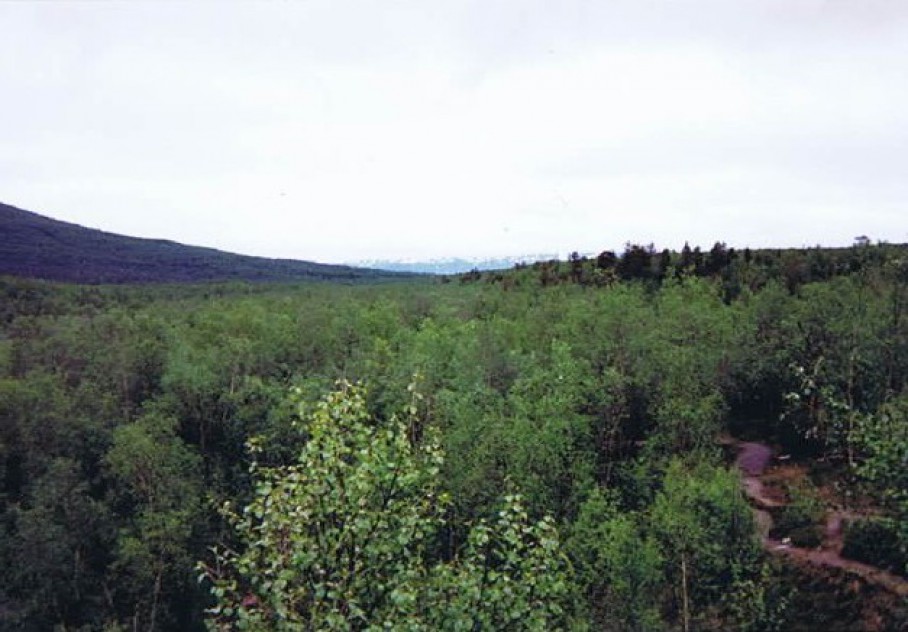 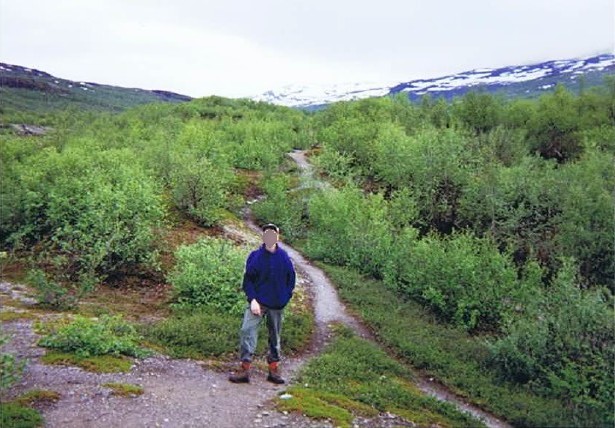 It is important that there is enough earth for tent pegs, no danger of flooding and a river with running water nearby, to be able to drink, cook, wash, brush teeth etc. The sun never sets, but hides behind the mountains and it gets a bit darker. At night we saw reindeer passing the tent. 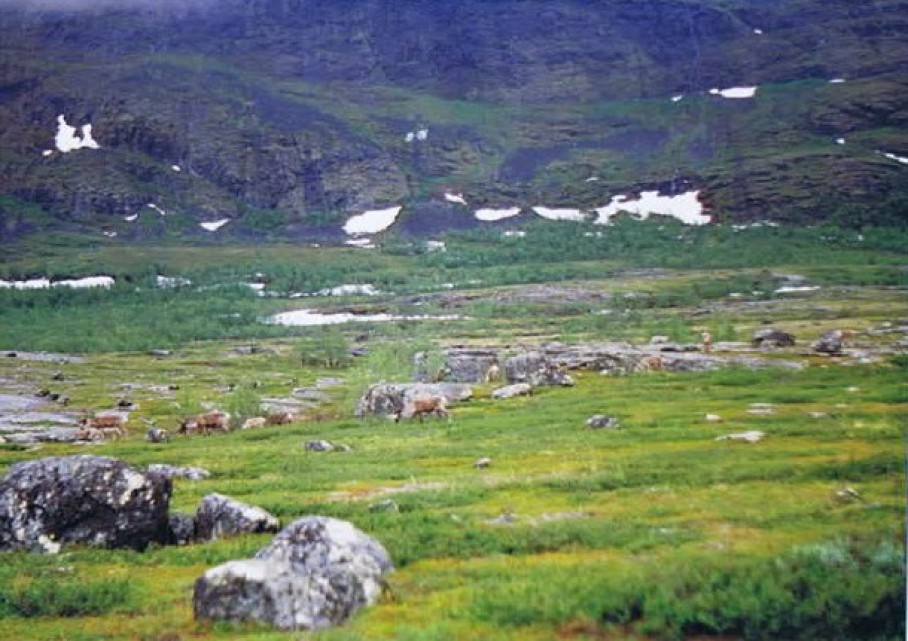 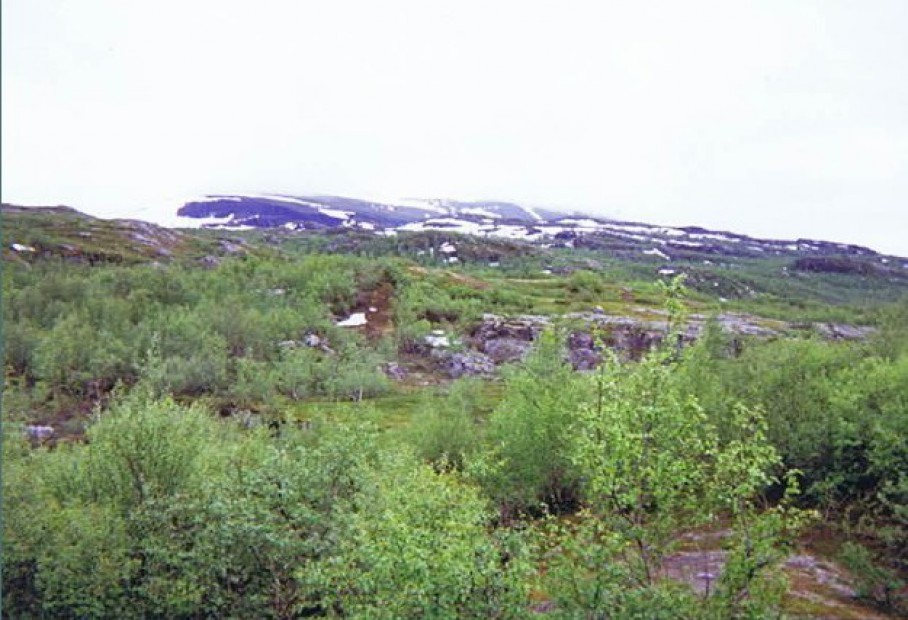 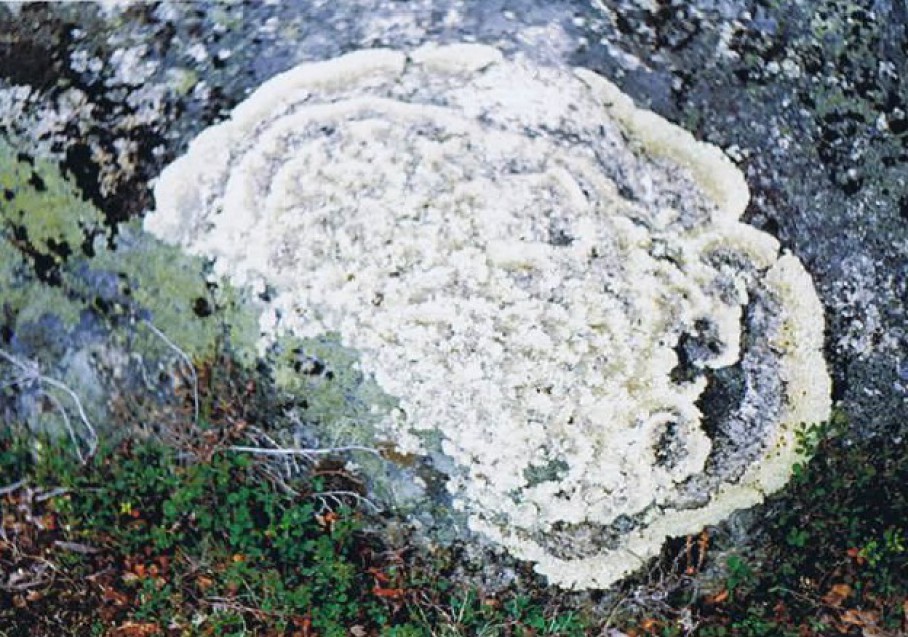 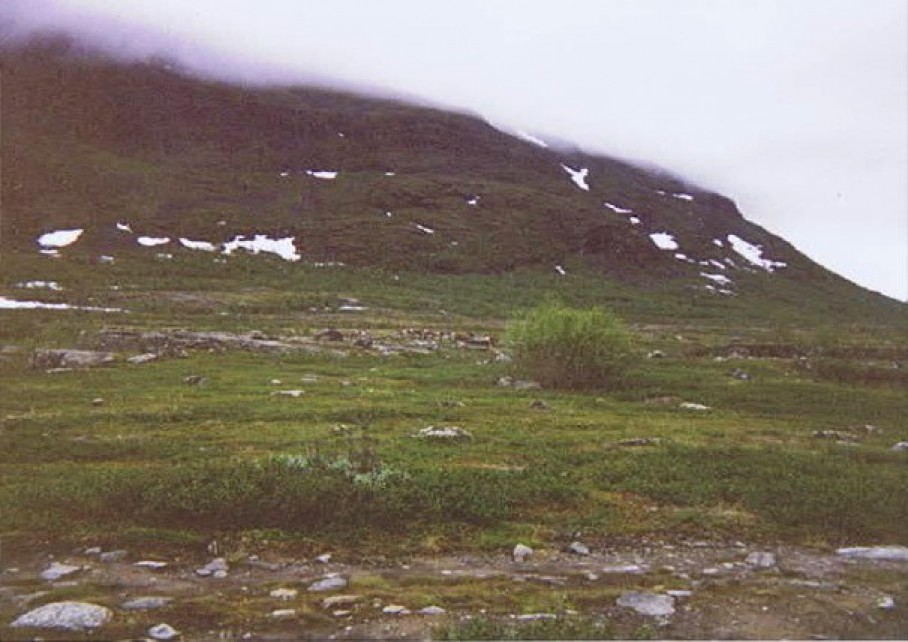 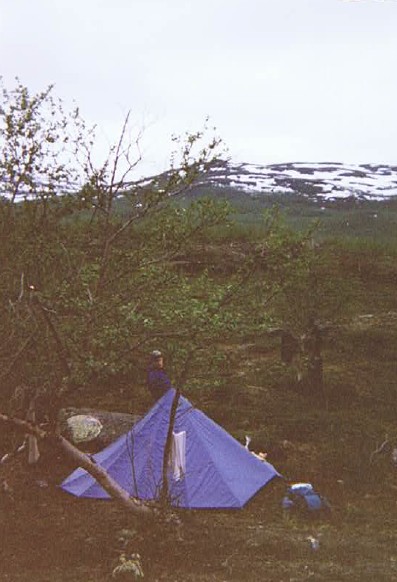